You are here: Home / Life / Dating / Making the Move: Dating in College

He looked over from his seat next to me. I felt a little self-conscious, but shrugged it off and kept writing notes, probably on “The Great Gatsby” or whatever high school kids are assigned to read these days. I was a naïve, doe-eyed high school freshman, over the moon to be “dating” my first “boyfriend.” This boyfriend was none other than the guy I’d been obsessed with for the last year. I was probably daydreaming about him that very moment, not this stranger staring at me in study hall.

That’s when the unfamiliar classmate sitting beside me passed me a note. “You’re cute,” it read, and after I fumbled for a response he followed up with a second note with a phone number.

Naturally, I almost keeled over.

It’s funny that what seemed so traumatic then now seems seriously ballsy. He gave me a compliment out of the blue and told me to call if I was interested, too. (Which I totally wasn’t—he was definitely the type to think that never showering let his “natural body odor” take center stage.) But to this day, whenever I find myself particularly hot for someone, I remember good old Freshman-Year-Study-Hall-Kid.

Fast forward a few years, a tough breakup in which the words “it’s not you, it’s me” may have come out, and I was a suddenly-single freshman in college. I was lost: I didn’t want to hook up with randos at parties with “Hollaback Girl” blasting in the background. I didn’t even know where to find randos to hook up with. All the parties I went to were with my friends and that just felt weird. I didn’t need my new besties watching me play tonsil hockey.

All I knew was, I wanted to meet people. I wanted to make small talk, learn about people and find new restaurants with newer company. I wanted to make lame, flirty jokes and see the way their eyes lit up when they got really into our conversation about Bollywood movies (my secret love) over slightly burnt coffee at the Chocolate Bar. What I wanted could actually be summed up in a lot fewer words: I wanted to go on dates.

I’m talking about good, old-fashioned dates: getting dressed up and feeling like a million clean and perfumed bucks despite being low-key terrified of embarrassing yourself beyond recovery for date night with someone special. I’m talking about going on multiple dates, with different people, just to see what’s out there and learn to recover from said awkward moments, which are, at least for me, sort of an everyday thing.

But where to begin? I guess I’d have to start at the beginning.

I hadn’t had to find someone in a long, long time. In high school, it seemed like everyone was handed to me; we all lived in the same town, played sports together and saw each other outside of class all the time. But in college, I was surrounded by anonymous peers (or, I guess, randos) and I was desperate to find a way to reach out.

I tried strategy, thinking about when I would see that guy I liked and how I could maybe talk him up enough to possibly exchange phone numbers to casually see each other every day and oh-so-delicately fall in madly in love, be together forever and put Allie and Noah to shame. It quickly became too exhausting. I couldn’t look amazing and ready to meet Mr. Right every day. The sweatpants slowly came back out of the closet. Finally, my roommate delivered the blow that snapped me out of it for good.

“Nothing will happen if you don’t ask,” she said. Just like that my dream bubble popped.

I wasted no time and got up the guts to just ask (and chickened out on more than one occasion). But when I finally did, I was so proud of myself: I had decided what I wanted and taken the first steps to make it happen. Now all there was to do was wait. But no matter what happened, I felt like I’d already won.

Seconds passed like centuries, but then I had my answer. And a date to get coffee.

Though that first boyfriend didn’t last, I can still say high school taught me a lot about dating that actually lasted beyond those four awkward years. Thanks to you, Study Hall Kid, I can now say I love dating, especially in college. Whether it be coffee on campus or dinner in the city, dates are great and working up the courage to ask? As easy as writing ten numbers on a piece of paper. And if our paths ever cross again, I’ll apologize for throwing out the note and never calling; I was 14 and panicked. And you were clearly a few years ahead of me. 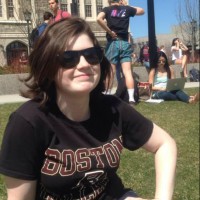 Katherine is a sophomore studying secondary education and English at Boston College. She is a lover of reading, quoting movies, and never met a cup of coffee she didn't like.

College, My Favorite Rollercoaster
Next Post: Professor Pro Tips: Connecting with the Person Behind the Podium