You are here: Home / Life / The Awkward Stage: AKA My Life

When I was a kid, I had a dream that one day I would blossom into a confident, outgoing individual who could work a room full of strangers without breaking a sweat. I had to believe in this dream because it seemed inconceivable that a person with all my shortcomings could make it to adulthood. Surely, a real adult would never worry about the things I worried about or feel the way I felt. In my head, there was an expiration date on my social anxiety and that deadline would be my first day of college.

Cut to sophomore year of college. I’m at a party where I know a total of two people. Friend One is making out with Random Frat Guy in a corner and Friend Two is deep in personal conversation with a non-mutual friend on the couch. I’m standing against the wall, thinking that a “normal” person would be out circulating the room and making new friends with ease.

The pressure to be doing something other than standing alone awkwardly builds. I end up leaving the house to walk around the block eight times until one of my friends texts me that she wants to leave. The night ends with me feeling socially stunted.

The fact of the matter is I’m still as awkward, introverted and shy as I was as a kid. I overthink every tiny thing. When I have to call people on the phone, my worst fear is I’ll suddenly forget what I wanted to say. If I’m ordering food at a restaurant, I’ll agonize over whether I should say “I’ll have the Chicken Tandoori” or “can I have the Chicken Tandoori?” The first way seems too demanding, but the second way seems like I’m asking the server’s permission … now the whole table is staring at me expectantly. Would it be weird if I just pointed at the menu?

Don’t even get me started on class presentations. I thought the concept of one’s knees knocking in fright was just an old wives’ tale until fourth grade came along and I had to give a speech on coral reefs. I stood up to go to the front of the room and somehow ended up running right out of the classroom instead. I’d be lying if I said I haven’t considered doing the same thing before college presentations. I know I’m being silly, and I can rationalize away all of my fears in my head—but that doesn’t make them go away in real life.

I’ve heard all of the advice about not caring what other people think. I know that if I feel self-conscious, I’m going to come off as self-conscious. I realize that acting confident in what I say is often more important than the actual content of my speech. But all of this well-meaning advice has never helped me—in fact, it has often made me feel worse.

I used to feel like a failure when I couldn’t stop caring what other people thought. In my mind, feeling uncomfortable and anxious in social situations was equated with failure. I thought if I really was an adult, I would simply stop being uncomfortable.

Over time, I got sick of feeling guilty for something that was outside of my control. I didn’t want to stop socializing or doing the things that made me feel awkward; I’d be missing out on too many valuable experiences. The alternative was to continue pushing myself outside of my comfort zone, and eventually realizing that I ultimately survived each situation. Even when I felt terrible standing alone in a crowded room or maneuvering a meal out, I lived to see another menu. Nothing truly bad has ever happened as a result of my discomfort.

I don’t think I’ll ever completely outgrow my awkward phase, and I’ve come to accept that. If I’m at a party where I don’t know many people, I still feel out-of-place. But I no longer think standing alone in a room full of strangers is the worst thing in the world. I can simultaneously be a successful, happy adult and someone who can’t decide how to order at a restaurant. 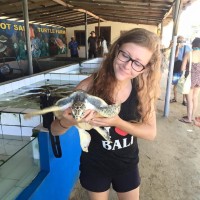 Chloe is a Senior English major at UW-Madison. She spends her free time re-reading Harry Potter, planning vacations she cannot afford, and smelling the candles at Target.

How American Universities are Viewed Around the World
Next Post: Grub Street Intern