A Reply to Westboro Baptist’s Threat to Picket Boston Funerals

Elizabeth O'Connor April 21, 2013 (Updated: October 24, 2014)
*Earlier this week, the Westboro Baptist Church threatened via Twitter to picket the funerals of those killed in the Boston Marathon bombings: http://www.usnews.com/news/newsgram/articles/2013/04/16/boston-bombing-funerals-will-be-picketed-westboro-baptist-church-says
Hello,
I imagine that you must get hundreds of letters like these, some open and some addressed directly to your headquarters, each day. I doubt that any of you will ever read this, but on the off chance that you do, I have a few things I’d like to say.

It seems like I’m always being told, whether personally or via the media, that I should just ignore you, you and your persistent cruelty towards and unfathomable hatred for your fellow Americans. To those people who possess that ever-mysterious ability to “let things go,” I salute you, but I cannot bring myself to take the high road when it comes to you. I can say with complete certainty that you are among the lowliest, most detestable cowards to ever crawl the face of this earth. I so profoundly despise you that I am shaken by my own capacity for hatred.
Most open letters that people write to you seem to contain sentiments along the lines of “our love is stronger than your hatred,” but I know that love means nothing to you. I don’t have to tell you that our love is stronger than your hatred; that should be obvious to anyone who’s been following the news these past few days.
I do have to tell you that Boston is, simply, tougher than you. It’s tougher than your signs and your chants and your ill-advised pseudo-religion. Boston will persevere in the face of this senseless act of terror, just as it has persevered for more than 300 years throughout countless periods of adversity. Do you really think the 4.5 million people living in the greater Boston area are afraid of a handful of fundamentalists holding signs? 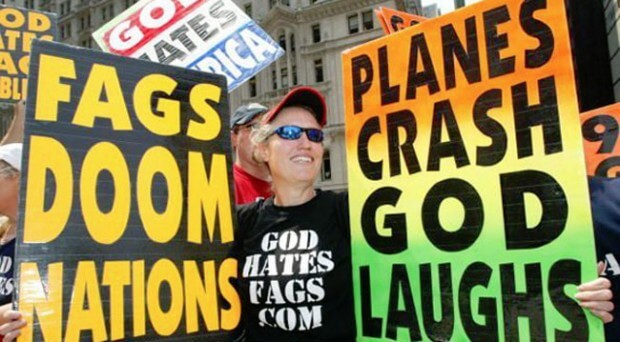 Bostonians love freedom, freedom of all kinds. It seems like you spend a lot of time spewing hatred and empty threats, but you don’t always show up. Keep on utilizing that freedom of expression and follow through this time. Come to Boston. Bring on the fire and brimstone. Protest at the funeral of an 8-year-old child on Boston soil and see what happens. Afterwards you can limp home to continue burning witches and eating at Chick-fil-A or doing whatever else it is you like to do during your free time. We don’t care.
If and when an apocalyptic judgment day comes (as you so vehemently claim it will), just know that Boston will be remembered as a city that helped pave the way towards true freedom, equality and justice for all, including “fags,” soldiers and “fag-enablers.” Boston will be remembered as a city full of patriotism and pride, both local and national. Boston will be remembered as a city that suffered a terrible tragedy on a day that should have been one of the happiest of the year, and Boston will be remembered as a city that only grew stronger in the wake of said tragedy.
You, by contrast, will forever be remembered as a wretched group of criminally insane bigots who dedicated their lives to rubbing salt in the wounds of the innocent, all in the name of garnering a few minutes of media attention.
May your “God” judge you accordingly.
Cordially,
Elizabeth M. O’Connor
Proud Fag-Enabler, Supporter of Our Troops & Member of the Boston College Class of 2014
Video: https://www.youtube.com/watch?v=SaAD5QGm7cA

Previous Post:Interview 101: How to Sucessfully Snag the Job
Next Post:Sexless Cheating