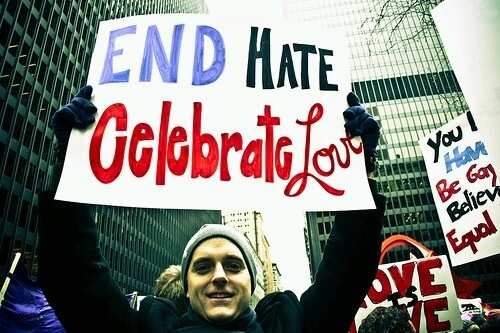 A Move Forward Towards Gay Marriages

Earlier today, the LGBT community experienced a victorious step closer to the Supreme Court in legalizing same-sex marriage. Federal appeals court ruled California’s ban unconstitutional, saying that it serves no purpose other than to “lessen the status and human dignity” of gays.

The ban against gay marriage, Proposition 8, was passed with 52 percent by voters in 2008. The court decided the ban to be unconstitutional because it singled out a minority group for disparate treatment for no compelling reason.

Six states allow gay couples to wed – Connecticut, New Hampshire, Iowa, Massachusetts, New York and Vermont, as well as the District of Columbia. California, as the nation's most populous state and home to more than 98,000 gay couples, would be the gay rights movement's biggest prize of them all.

It is unlikely that same-sex weddings will resume anytime in the near future since the ruling will not be in effect for another two weeks in order to give time for an appeal from Prop 8 supporters.

Opponents of gay marriage planned to ask the Supreme Court to overturn the ruling, which came more than a year after the appeals court panel heard arguments in the case.

In my opinion, I can't believe that it is 2012 and there are people being held back from the institution of marriage. Men and women can be divorced six times and elope in a drunken haze, only to have it annulled the next day. However, two people who have been happily committed for years are told their love is wrong because they are the same sex. Something doesn't seem right. Hopefully this step in the right direction continues on the path so that one day this will no longer be an issue..anyone think if I don't stop now I might start saying "I have a dream?"

What do you think?

Previous Post:Wine & Dine Me: Tips On Being Romantic
Next Post:Celebrating Single On Valentine’s Day