When boys were created, the image of an onion appeared. Like dirty, old, soggy onions that you know rotted months ago, but for some reason keep holding on to. As you cling on to them, they begin to grow mold and stink. They also make you cry. Though, not the crying you see in movies or the telenovelas, when the girl who loves a boy so much gets her heart broken. No. The cry from someone who has had the most valuable, precious thing of themselves, stolen.

Unfortunately, I never had a warning or a prep talk about the boys who seemed sweet but had onion-like ways.

As the oldest and first to attend college in my family, I can admit that I was naïve when it came to the game. The only game I was aware of were the ones played in Doak. But for many, the game of heartbreak and hookups was more entertaining.

I had my first practice with a guy I won’t name. I’ll call him Steven. He was a film student and itched to create his own reality like Steven Spielberg. It was the week before my first day of classes and my mom left early. She has this weird thing about being on time and arriving and leaving earlier than normal. Something she refuses to change about herself despite nineteen years of complaints. I watched her outside the window of a dorm that previously held all women, pull off, and couldn’t help feeling a brew of excitement bumble up inside of me. I was free! But, free to do what? No one was there. I mean no one! Excitement quickly turned into boredom which turned into loneliness. By the third day, I was going off the walls. Confined in my own little space, the world drove me crazy.

So crazy I turned to Tinder.

I always had great hits on Tinder when I was in Tampa and figured it would be the same in Tallahassee. I mean, what could be different besides the scenery and places to take someone on a date?

I spent that whole night swiping, what seemed more left than right, but swiping, nonetheless. It had to be about an hour in when I landed on Steven’s profile. He was easy on the eyes and cool. Him being a film major really drew me in. I was a sucker for the arts and film. Plus, he had these eyes that were so big, kind of on the verge of being bug-like. They were the deepest color of green I had ever seen, and I wanted to be consumed. His pictures were those of an Adonis captured in the most beautiful light. Everything about him was movie-like and of course I swiped right. We talked for a good while, that being like a minute, and decided to meet.

It was a humid Tallahassee night and my whole body was sweating from nerves.

I felt and looked like melting chocolate. I had on a black jumpsuit, trying to be sexy, leaving my chest exposed to those little blood demon mosquitos. I thought for a quick second to just turn around and call off the date. I mean, I would have had every right to do so. It was hot, I dressed inappropriately for the wildlife of Tallahassee and Steven was running late. If that wasn’t enough, I was also hosting Aunt Flow. I thought to myself, he probably bailed anyway, with him being super-hot and stuff. Right as I was turning my back, a beat–up yellow Volkswagen pulled up. At first, I was taken aback. The car was so bright, yet dingy at the same time. I could not believe that anyone would drive anything like it. It had dalmatian like spots of rust all along its body and the wheels were barely hanging on. My phone immediately began to vibrate with the message, “I’m here.” I thought to myself, oh hell no, yet still found myself hesitantly walking towards passenger door, slightly avoiding eye contact.

I guess he must have seen the uneasy look in my eyes as I approached the car, because from the moment we made eye contact, he kept this big goofy smile on his face. Like the smiles Chick-fil-A workers are forced to wear even when they’re internally screaming. As I got closer, the nearest window to me was drawn down to reveal a completely different person than who I matched with.

The Adonis I imagined betrayed me with an image of a Brutus. The word husky came to mind. The clean-cut boy captured in pictures was only present in his smile. Steven was not the finest of wines, in fact, he was more like a Barefoot Merlot. Not to say that there is anything wrong with Barefoot, but when you are expecting a nice deep red, you want top shelf. He looked way older and rounder than the pictures he had up. If that was not enough, those green eyes now looked like cesspools, swallowed by lack of sleep, caffeine highs and crashes. His hair was fine, unlike him, and he looked as if he hadn’t brushed it since middle school. I was beyond upset but did not let it show.

For some reason the anger that filled my body was quickly replaced with pity and disgust.

Pity, because I was in the presence of a guy who was losing a fight with age and genetics but came off as the sweetest romantic. Disgust, because I fell for his trick and hooked up with him. Which, I did repeatedly, until I eventually realized that doing so was like eating an onion all by itself. My body was always tense around him, consuming him and his energy. My reactions were always severe, usually, “no, I don’t want to” or “no, I am not in the mood.” Reactions he never respected, but never fully crossed. I was only eating this onion because he casted me as the Audrey Hepburn in his life, which made me feel special. Especially in the lonely state I was in. Though what I was eating was not a breakfast at Tiffany’s, his diner was not one to revisit and the role I was playing was not one of chic and style. Instead, I was casted for a role that entailed being objectified and hyper sexualized. One that Steven knew I would do, just for a chance at that “Oscar,” to be a star.

That was freshman year and I have since broken out of that role after regaining my sense of self and idea of self-love. Instead, I am the director of my own life, the owner of my own “diner.” A diner that no longer serves onions. 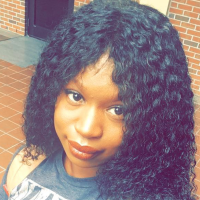 Ganay Thompson is a Senior at the Florida State University. A lover of the 80's, thrifting, and any fellow Aquarius. More than likely reading James Baldwin right now while listening to Sade.