How to Make a 21st Birthday Shot Book

God knows you’re not planning on remembering your 21st birthday party the next morning, so one of the funniest traditions is to make a 21st birthday shot book.

You can chronicle every shot, every stranger and every slip-up. Because even though you’ll regret the play-by-play the morning after, once you’ve recovered from the hangover, you’ll be reminiscing over this for years to come. Especially when the other parts of being 21 start settling in – like bills and stock investments and what to name your third cat.

Your 21st birthday shot book will be like a scrapbook with 21 pages, one for each shot. As the pages get filled up, you may not even be able to keep a hold of it, let alone write in it. So the first step to making a shot book is to announce the plan to your friends because they will most likely be the ones finishing it. 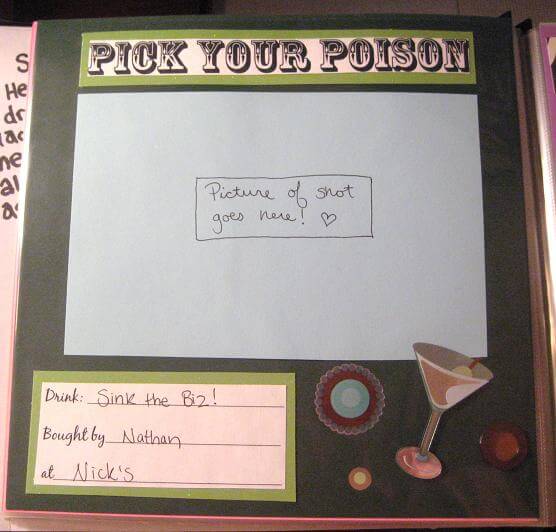 2. Who bought the shot for you

3. Where the shot was taken

4. When the shot was taken

5. A picture of the shot being taken

But before all this happens, you might want to take a couple of preparation steps! Add decorations to the scrapbook that reflect your personality and print out some sober photos of yourself to put in it.

It’s important to remember that according to Clayton Neighbors, a University of Houston psychology professor, fewer than 10 percent of people who attempt to take 21 shots actually do. Don’t feel pressure from the blank pages, because this drinking game is more about participation.

Once you’re ready to make memories that you’ll forget somewhere around shot #8, you can start collecting more for the scrapbook. We have tons of suggestions on what to do. You can ask the bartender for a recipe of the shot and score it from 1-10 with a picture of your bottoms up reaction. You can write down the funny conversations. You can take pictures with strangers and have them sign as witnesses to your shot.

You can save souvenirs from the places you barhop around, like bar napkins or drink straws or business cards. You can have your friends write you messages like it’s a high school yearbook but without the “HAGS.” And you can include quotes about turning 21, like our ten favorite birthday ideas below:

By the end of the night, you’ll have a (hopefully) beautiful keepsake made by all your best friends to post all over social media.

Gifts For Your 21st Birthday

Previous Post:Hey Girl, Ryan Gosling Wants to Be Your Valentine
Next Post:How to Ace Your Skype Interview