You are here: Home / Life / Dating / 10 Tinder Stories That Will Make You Blush, Laugh, Cringe or Run for the Hills

Tried and true Tinder vets need to help the new singletons on the college dating market. Naive, excited Tinder users and sad, hopeless regulars will still feel the thrill of swiping through millions of Tinder accounts and set a date with one. These memorable (or haunting) Tinder stories from fellow users might change that feeling. Warning: You might swipe left—forever—after this.

Check out these 10 real Tinder stories for every emotion that can come from the app.

1. Never Too Old to Wet the Bed

“I met this guy, Lance, on Tinder almost a year ago and it was normal. We hung out, watched Netflix and went to Chick-fil-A. One Saturday after a football game he asked me if I wanted to go downtown and celebrate our team winning. I met him at a bar and we stayed out for a few hours until it was time to go home. I was originally going to just take an Uber back to my house alone but he didn’t have a ride so he asked if he could come back to my place and I said yes, not expecting anything to happen other than giving him a place to crash, then I would give him a ride back to his house the next morning.

Nothing happened that night but the next morning I woke up and I felt kind of wet. I thought that it was sweat (it was summer and our AC was broken). I didn’t think anything of it. It wasn’t until I went to the bathroom and realized that my clothes were soaked and had a smell. The guy straight up peed in my brand-new bed and I still had to drive him home when he woke up. After I dropped him off, he texted me saying that he was so embarrassed and asked if he could come over to clean it up. I wouldn’t let him and I took the whole day to clean up his mess. I haven’t talked to him since that morning and I don’t plan on it. Except for the two awkward times I ran into him downtown a couple months after.”

2. Hugs AND Drugs? Not The Best Combo

“I met this guy on Tinder and I slept over after our first time hanging out. I woke up later to the police pounding on the door in the morning. He was a drug dealer, and naturally I proceeded to date him.”

3. Guess You Could Call It a Blind Date…

“This girl from Tinder invited me over to her apartment so I went over there at night. When I got to her front door she had all the lights off inside but told me to just come in. She immediately starts feeling me up and trying to kiss but I couldn’t even see what she looked like. I kept telling her to turn the lights on but she wouldn’t so I got up and did it myself and looked over and saw a MAN. I have never run so fast in my life.”

“It was just a normal date night—two college kids with Pub subs by our school’s lake—what could really go wrong? We both laid a blanket down next to the sidewalk on the grass and it was around 7:30 p.m., so it was just getting dark. We laughed, talked and chowed down on our chicken tender subs like no tomorrow. All of a sudden, we both heard some noise behind us around the leaves. I thought, ‘Oh it’s probably a raccoon.’ I kid you not, 10 seconds later we both see the black object approaching us and it was gator! I dropped my keys, Pub sub and phone to get up and run for my life. From 40 feet away, we look back and there’s a slimy wet gator walking all over my favorite blanket where my keys, phone and sub were at.

We were in shock that a gator just so easily came up to us and is now invading my personal property. Shawn (my Tinder date) threw some of his bread a few feet from the gator and eventually the gator moved off of my comfy blanket. Shawn then pulled the blanket with all my essentials away from the gator. We couldn’t stop but laughing at the whole situation in the end and how crazy that was. If we were being loud and crazy during the time the gator was sneaking up and we couldn’t hear it, who knows if we would both still be here today.”

“There’s always those fake profiles on Tinder, and I always swipe right on them anyways. I was messaging a banana, and whoever was running the account was actually really cool. I asked if he (at least I hoped it was a he) would want to meet up. They said yes, so we went out for pizza. When I got to the restaurant, I saw my neighbor when I walked in. He was the banana.”

6. Ditched My Tinder Date for My SoulMate

“I was throwing a joint birthday party for a couple of my friends at my apartment, and I told everyone to bring a Tinder date. I had invited this guy from a different town who I met on the app to come. After the party started, the guy whose birthday it was came over to me and told me that no one liked my date. I was very close with my friend group that was there and they all thought he was weird, but I made sure they were nice to him.

Later on, I went to the bathroom to reapply my makeup and I heard a loud banging on my door. I opened it up and it was the birthday boy. He asked to talk to me for a minute, so I let him in the bathroom. He locked the door, turned around, held my face and kissed me. Afterward he said, ‘I just wanted to show you what a real man was.’ I never saw my Tinder date again and have been dating birthday boy for two years now.”

“I matched with a guy on Tinder and he asked me to meet him at this bar. After I got there, I used my friend’s fake ID and went to the counter to get a drink and the bartender looked at the ID and asked me a few questions on it. I had no clue what the answers were so I got kicked out of the bar and my date was left alone, not knowing what happened to me. I was too afraid to say I got kicked out so I didn’t say anything after that.”

8. The Stars Weren’t in His Favor

“I went to grab sushi with this girl from Tinder and everything went really great. She told me later we couldn’t ever date though because I’m a Sagittarius.”

“I matched with this girl on Tinder and we picked a night to meet up and go out, but I matched with this other girl. I made up some excuse why I couldn’t go out with the first girl and she said it was okay and she could just go pick up a shift at work. I took the other girl out that night and we went to a bar and our bartender was the girl I cancelled on. It was the most awkward thing I ever had to experience.”

10. When You Bat for The Same Team as Your Date…

“I went to Starbucks to meet up with a person from Tinder for the very first time, so I was pretty nervous. Everything went well though, the guy was nice and we talked about our favorite TV shows, music we liked and stuff like that. We didn’t talk much after that though. We followed each other on Instagram and a little while later I saw him post a pic… with his boyfriend. Two years later I dated a different guy on Tinder for like two or three weeks and I wasn’t feeling it too much so I had to put him in the friend zone. He messaged me on Facebook a few months later letting me know he was gay.” 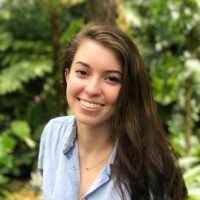 Madison is a fourth-year public relations student at the University of Florida. She is the PR chair of the UF Equestrian Team and is often seen eating at the Panda Express on campus. When she isn't doing homework or writing articles, you can find her binge-watching New Girl... again.

10 Receptionist Jobs and Other Desk Jobs You’ll Actually Want to Wake Up For
Next Post: Age is Way More Than Just a Number: Being 17 in College