In a world dominated by social media, YouTube and the people who create videos on it have become extremely popular. Millions of people get their entertainment, advice or education from popular YouTubers like Grace Helbig or PewDiePie. Unlike many of the biggest Youtube celebs, the people on this list don’t make their living from their videos. Their subscriber count consists of fewer digits, but you don’t want to miss out on their incredible videos.

Remember Nash Grier’s video “What Guys Look for In Girls” that spurred major backlash for its treatment of women a couple years back? One of the responses included a viral poem with the same title written by Savannah Brown that ended up with almost 5 million views. Since that video, she restarted her channel, focusing on telling her truth and talking about the changes that she had made in her life since moving from Ohio to England for university. Brown’s channel developed into a mix of poetry and self-reflection with a dash of music, creating a space for those recovering from eating disorders and those who just love to think about the state of the world around them.

If you’ve ever wanted to learn about feminism, look no further than Marina Watanabe channel. Watanabe is a women’s studies major at Sacramento State University, and she proves her knowledge through her series “Feminist Fridays.” From videos on whether the Hogwarts Houses are gendered to being colorblind, she covers it all with a dry sense of humor. Watanabe’s partnership with the magazine Everyday Feminism has spread her talent to a large audience, which has also led to a lot of harassment. But rather than letting the horrible comments stop her from educating people about feminism, she continues to persevere and make both educational and entertaining content.

Sabrina Cruz (AKA “Nerdy and Quirky”) got her big break after winning Nerd Factor, a contest held by Hank and John Green of Vlogbrothers. Cruz’s voice mixes comedy and sarcasm seamlessly, and everything she makes will have you laughing out loud. “I can go from defending the evolution of language in one video to making a satirical makeup tutorial in another,” said Cruz. Without trying too hard, she really is a #relatableteen, especially since she’s starting college in the fall. “Being a student and a content creator is great because I don’t have to pretend to know the struggle or think back a few years to relate with my audience, I am living the relatable,” said Cruz. In her spare time, she hosts Crash Course Kids, an educational channel for kids, and sometimes posts daily vlogs on her second channel Quirky and Nerdy.

You might recognize Ashley Mardell as the bow-tie, snapback wearing LGBT educator of YouTube. “I go beyond the basic identities that people have a base knowledge of, and get into more nuanced identities,” said Mardell. Her videos are informative, while also being personal and entertaining. Mardell is an advocate for people who are new to YouTube to get involved. “A lot of people are scared to start channels because they see full-time YouTubers who have really expensive cameras and they have all these things that I don’t have or know how to do. You can have a job, you don’t have to know how to edit, you can have a really cheap camera, and you can have a channel that is interesting and worthwhile and awesome,” said Mardell. In other words? You can totally relate to and learn from Mardell at the same time.

How to Adult, hosted by authors Emma Mills and Michael Martin, delivers exactly what the title promises. Each video targets an area of life that most adults need to know how to navigate, like how to buy a car or how to quit your job. The information is condensed into what they deem most important, and they provide more information in the description for those who want to continue educating themselves. For college students, this channel feels like a godsend, letting you learn about writing a cover letter or how to get cheap flights without frantically googling. If you find yourself needing to call home every time you do laundry, you need to subscribe to this channel ASAP.

Connor Manning, known as AConMann on YouTube, is best described as that guy who stands in the corner at the party and has deep conversations about life with one person the entire night. Manning’s videos almost read like a diary, following his life and leading to deeper discussions about the meaning of life. His unorthodox story, which stems from a history of substance abuse, shapes his videos in ways that anyone can relate to. Manning focuses on how small interactions with others can be handled in a way that benefits your personal wellbeing in the long term. While he does discuss his bisexuality on his channel, it doesn’t shape every conversation he has with his audience. You can watch his videos for years and still learn something new every time, and since his move to Los Angeles, his content has felt more and more incredible.

Ben J. Pierce, otherwise known as KidPOV, is a force of nature that has been making videos on YouTube since he was 12 years-old. At first glance, Pierce looks like any other teenager trying to make it on YouTube, but everything he does feels unique and creative. “A lot of my videos are presented in a tongue-in-cheek way to commentate on pop culture and internet trends,” said Pierce. In addition to his comedy-style videos, Pierce is a singer-songwriter who released a music video in late 2014 called Little Game that has reached over 6 million views to date. Little Game talks about gender roles, and recently Pierce’s videos have started to talk more about gender roles as his interest in makeup has developed. YouTubers like Tyler Oakley and Troye Sivan have championed Pierce and his content, and he’s definitely someone to watch over the next few years.

Kati Morton seems like the unofficial therapist of YouTube, which seems very fitting since she’s a therapist during the day. Morton’s videos discuss what happens in therapy, how to handle specific mental health issues and how to deal with what life throws at you. “My channel is all about mental health from the perspective of a therapist, in an easy to understand, and non-judgmental way,” said Morton. While you can’t substitute Morton’s videos for actually going to therapy, they can help someone who doesn’t necessarily have the means to get help or doesn’t feel ready to see a therapist yet. “[I am also] able to talk about serious content in a palatable manner and help educate people about mental health,” said Morton. Her regular #katiFAQ series allows viewers to ask a question that they’re too nervous to ask anyone else.

Lex Croucher, known as Tyrannasauruslexxx on YouTube, is a female comedian with a self-deprecating sense of a humor and a passion for social justice issues. From videos about cruelty-free makeup to her favorite books, you can never predict what you’ll find on Croucher’s channel next week. Originally, Croucher’s channel mainly focused on comedic vlog-style videos, but recently she started to talk about the issues like living vegan or taking care of your period. Her unique sense of humor allows her to convey her opinions while also entertaining her audience with jokes about being British.

Rhiannon McGavin said her channel features videos from Shakespeare to skincare, with [her] yelling in between. You probably know McGavin for her slam poem “Somewhere in America”, but her poetry skills extend onto her YouTube channel regularly. McGavin also hosts a series called YouTube Girls, where she teaches girls how to get started making videos on YouTube. She calls her channel a soft corner of YouTube. “I try hard to make my digital space as soft as possible by steering away from attention-grabbing graphics and just focusing on content.” If you ever just need to chill out and relax, her channel sounds like the perfect place to start. McGavin and her channel will definitely remind you of your Jewish grandmother and your best friend wrapped into one. 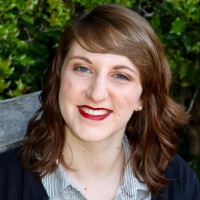