You are here: Home / Life / Academics / How to Use Gen Eds to Find the Right Major for You

You entered college dead set on becoming the next Olivia Benson from Law and Order SVU, but now it’s your sophomore year and you’re leaning more towards journalism and becoming the next Carrie Bradshaw instead. Sure, some of us know exactly what we want to do our whole lives, but most of us are just trying to figure it out as we go. It’s not uncommon to hear of second semester sophomores or juniors changing their major; fifth year seniors are common for more reasons other than pulling a Van Wilder. Fortunately for us, gen-ed classes are required–and we can use them to our advantage in the process of searching for our major.

Though you may think that Philosophy is a boring course you just have to get through, if you actually take notes and listen to the lectures, you may find you’re interested in the material. Finding a major you know will lead you to a well paying job certainly is important, but finding a major you’re interested in and know you’ll enjoy learning about is also significant. By identifying which classes you find most compelling, you’ve made a big step in the direction of choosing your major.

Reach Out to TAs

You know you should go to office hours and connect with your Calc professor, but he’s just so intimidating. Luckily, you probably have a more approachable option. TAs most of the time are graduate students or students who are majoring in that field of education themselves and have taken the course before. Joanna Colgan, a Penn State M.S. student and graduate TA, said, “Both professors and TAs like to help in any way we can, whether it’s with career experience, graduate school, switching majors or careers, what that major is like, etc. You can even ask professors or major advisers if they could put you into contact with students in that major or who’ve taken a certain course.” Since TA’s are also fellow students, it can be a lot easier than asking your 60-year-old professor.

Lynda Sukolsky, the Academic Dean of Student Success at Seton Hill, said it’s best to take a variety of things at once instead of overloading your schedule with one subject. “A balance gives you and your brain a good mix of subjects. It gives you some strong classes (hopefully) that can help if you have a weak class area on your schedule,” Sukolsky said. By shaking up your schedule, you can also test out multiple different major options that you might be considering.

Get to Know Your Professor

This is one we’ve all heard a million times–but if you’re undecided, take it seriously. “Sit where you can be seen and engage in class discussion. Ask questions if you have them. Utilize faculty office hours, even if it to check that you are on track or understand something correctly,” Sukolsky said. Getting to know your professor is beneficial because they can talk to you about what’s beyond their classroom.

Reach Out to Other Universities

Small private schools obviously won’t have as many options for classes as very large public schools. Don’t hesitate to reach out to professors from other schools for advice or to ask them about their course. Just because they aren’t your specific professor doesn’t mean they won’t make the time for you. Janet Schulenberg, the Associate Director of the Division of Undergrad Studies at PSU, said, “Remember that professors are people too, professors became professors because they value learning,” You don’t have to transfer schools to make connections other than at your university.

Typically schools have academic, major-specific clubs you can join. Go out of your way to get some information about clubs that deal with any majors you have in mind and attend a few meetings. You don’t need to overwhelm yourself with joining a multitude of clubs, but it doesn’t hurt to get information and talk to students who are members.

They aren’t at all the same thing. “I know that it’s really important to have a job once you graduate, but try not to let fear that you won’t have one paralyze you from making a decision or cause you to write off whole fields of study without taking a serious look,” Schulenberg said. “Every major has value in that it helps hone particular skills. Recognizing what those are and learning how to talk about them is the key to finding a path toward a fulfilling career.”

Gen eds may feel tedious to fulfill, but if you play your cards right, you just might end up finding your future passion amongst the boredom. 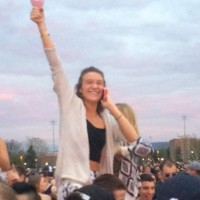 A Foolproof Guide to Finding a Date by Valentine’s Day
Next Post: 3 Major Mistakes that Lead to the Wrong Major