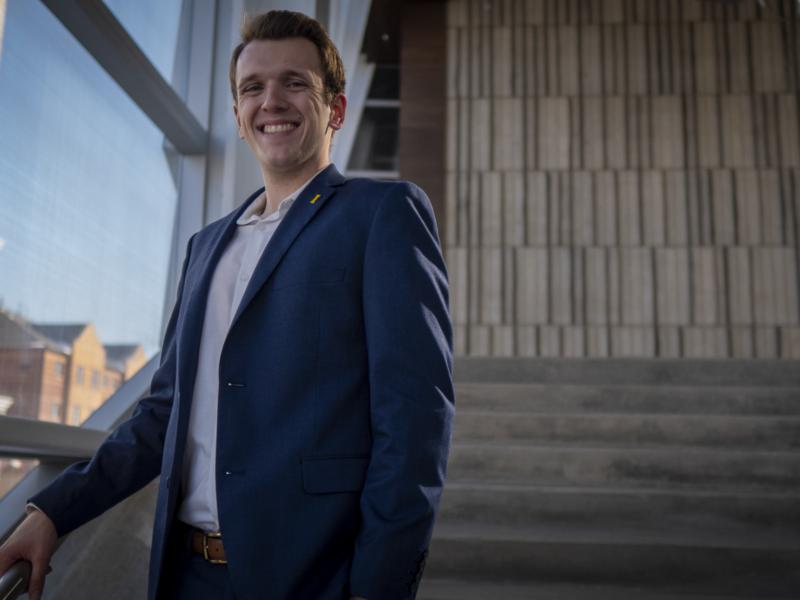 Student government offers ambitious students a great resume insert, legislative secrets and leadership development opportunities. Sadly, many students know little to nothing about what student government actually does for them and their campus. Though this job might feel thankless, the rewards of a happy student body compensate for that. Patrick Johnson, a senior double majoring in Economics and Political Science with a minor in Spanish, currently fulfills the USG president position for the University of Iowa (Uiowa). And with a blueberry muffin in hand, he’s ready to make sure each student feels zen.

Keep reading to learn more about Patrick and what he has planned as Undergraduate Student Government President for the University of Iowa:

Q: Who or what inspired you to run for office?

Over the years I really got involved with the finance side of student government. I’ve held numerous different finance positions in the organization and through that I’ve been able to see a lot of the real kind of monetary, tangible impact we’ve had on students over the past three years. For me, it was kind of about continuing that work. I thought we had a lot of really really great ideas on how to improve the student experience and how to support students. And so, I think I was just really inspired to run for this position by the work we already do in student government and seeing what our past two presidents have been able to do and the great work they’ve been able to accomplish.

PJ: I joined in the spring of 2020, right before the pandemic, so I just joined as an at large senator in our legislative branch, then the next year I ran for the Finance Committee chair and then the year after that I was appointed as the director of finance. So, I basically managed all of the monetary allocations for student government. Meaning, all the different services we provide across campus, any type of funding for student organizations. I really oversaw our entire budget, and then this year I was elected president.

This role is different from ones I’ve done in the past because you know when you’re talking about money, your relationship is very transactional. Whereas with my new role the transaction relationship still exists, I still talk with people all the time about finances and funding, but now a lot of it is also communication. So instead of, you know, just signing off checks and signing off allocations I’m really hoping to craft the initiatives we’re pursuing. I’m really looking at a broader level, helping to guide these different projects and offering my input rather than just allocating money.

Q: What are your goals as president?

PJ: I really have two things that I’m the most passionate about and that’s what Vera and I ran on. The number one thing is investing in student mental health and well-being. Continuing to work with our campus partners and university counseling services to destigmatize mental health treatment and making sure that resources are accessible and provided to all of our students regardless of your background. We want to make sure that you can go to college and not have to worry about your mental health and well-being.

We also care a lot about campus safety and making sure that students, whether you’re living on campus or living off campus, feels safe in Iowa City. You shouldn’t have to come to campus and worry about something bad happening to you or any harm coming to you. When you’re here just trying to pursue an education and be the best version of yourself, you should not have to have those external worries. We just want to be sure that students can be the best version of themselves while they’re in college and while they’re here at Iowa.

Q: What are the greatest strengths of Uiowa’s student body and why?

PJ: I would say, really just one of the strengths of Iowa in general, at least with student government is our shared governance model. Shared governance is essentially how decisions are made or how input is received on campus. Our university administration cares a lot about what we as undergraduate students think. They don’t always take our word and make a decision, but they always listen to the voices of undergraduate students, graduate students and even our faculty and staff here on campus. It’s not just one office on campus that makes the decisions. Especially as student government, we’re always brought into conversations and asked for our input as undergraduates. Personally, I think that doesn’t always happen at other Big Ten schools or schools of our size. Also, I think our student body is generally engaged, very aware and they’re all very nice. ‘Iowa nice’ is very real.

Q: What’s a weakness of UIowa’s student body and why?

PJ: I think right now we’re kind of facing the issue and weakness of student engagement. I don’t blame any Iowa students for that. It’s not one person’s fault for a lack of student engagement, but I think as we’ve seen throughout the years and throughout the last couple of years that student’s engagement is just really hard to obtain. So that’s just one area where we’re kind of lacking and that’s something they started to reverse. We saw and we’ve seen it in the last year, and I’ve already seen it for this year. We have a lot more students reaching out to us and looking to get involved or looking to get engaged and that’s really awesome.

Q: What do you think you’ll enjoy the most about being president?

PJ: I think being able to see a lot of the work that’s being done through a more macro lens, if that makes sense. Like I said before, my job as director of finance was very tailored and directed through a finance plan so I was always worried about budgeting and funding and that transactional relationship. But now I’m able to see things from a higher up perspective. I can look at things through a marketing perspective to benefit the student body or worrying more about guiding conversations and guiding initiative. I’m really excited to get to work to invest in student mental health and student safety from more than just a financial aspect. I’m ready to get in there and work with all of our members at USG to make real tangible change on campus that benefits all students.

Q: How do you plan to balance being USG President, classwork and any other obligations you have?

PJ: With my role as director of finance last year, I was really busy all the time. So, it was something where I’ve kind of always been a really good multitasker. I’ve always been able to not over commit myself and be able to prioritize as well. I’m no stranger to multi-tasking. I did it last year and I know that I can do it this year. We just have a great support system in student government, and I have amazing people to support me in my personal life too. Having a support network is key, that’s for sure.

Q: If you could be remembered for one accomplishment during your time as President at The University of Iowa, what would that be?

PJ: Being someone who invested and took the time to support student mental health and well-being. That’s something that is so crucial to me. It’s so important and I know in the last year one of USG’s largest funding initiatives was partnering with the Dean of students’ office to create the community crisis line. Which is a 24/7 mental health service line for students going through a mental health crisis. So you can call, text, message and chat in real time 24/7 with a fully trained professional for all Iowa students at no cost.

That was something where when that funding bill passed through student government, I was so proud, and I got up in front of everyone and I said how proud I was. That’s something I had been dreaming of for three years. I hope this year’s administration is known for taking the time to invest in student mental health in a way that maybe hasn’t been done in the past.

Q: How can you get students involved in issues around the school?

PJ: You know that’s actually a great question and it’s a question that we have been trying to figure out. With the COVID years it seems like every department, every service and every organization we talked to is struggling to get members, retain members or keep them involved. I would say for student government, I think we just have to be more transparent and more accessible to the student body. It’s great that we provide a bunch of services to students, but if they don’t know the services exist what’s the point of the services?

We have to be much more transparent about the work we do, we need to make it more visually appealing, we need to market it better and then we just need to make ourselves a more accessible body to the students. I feel like when students have the access and they know what we’re doing, they’ll actually be very passionate about what we do. They just don’t know what we do.

Q: Do you have aspirations to run for any political positions after graduation?

PJ: You know, I kind of did for a while. I always thought that’d be fun and maybe way later in life, maybe. But right after my time in undergrad, I’m planning to go law school and practicing law of some kind. I’m not totally sure what kind yet, still kind of figuring that out. As it stands right now, that’s something I will always be interested in. But, I mean, most political science majors would probably give you the same answer. I’ll say it’s always an option, but I’m pretty committed to law school.

Tip #1: Pick something you’re passionate about and run with it. It really doesn’t matter how unrealistic or how unobtainable you might think it is. When I joined student government, I had an idea very similar to the community crisis line and three years later I’m able to say that’s been accomplished.

Tip #3: Push yourself but don’t push yourself too far. Always keep your mental health at the forefront of what you’re doing while pushing your limits. If you told me when I first came into college that I’d be standing in front of 80 people, I wouldn’t have believed you and freaked out. It’s really really hard to put yourself out there but don’t be afraid to do that.

How to Connect with Patrick:

Paige is a fourth-year student at the University of Iowa studying journalism, mass communication and enterprise leadership. Caffeine is an everyday necessity for her and if she could carry coffee in an I.V. she absolutely would. Most of her days are filled by studying, then studying, then after a little study break, she studies some more. Outside of College Magazine you can find her working as a manager at University Catering, playing Geshin Impact at ungodly hours and watching Gilmore Girls for the 50th time.

Previous Post:Top 10 Summer Haunts for George Washington University Students
Next Post:5 Tips to Get Through Your Freshman Year of College