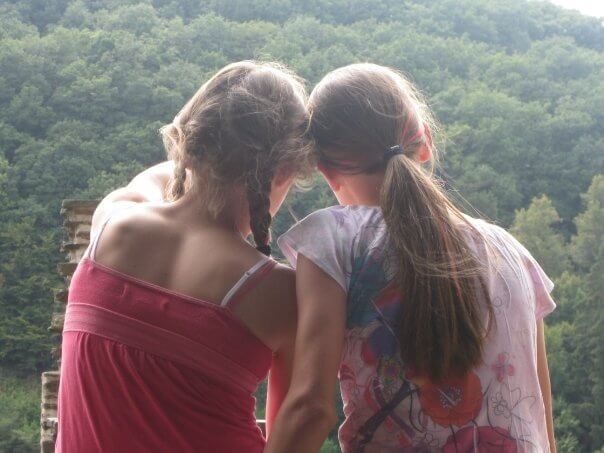 Imagine your best friend was 100% guaranteed to stay in your life forever. That no matter what happens, where you are, what you do or when you do it, that’s a ride or die friend until your last moments. You grew up together, learned together, cried together and were able to be yourself completely. This person knows your deepest secrets, your greatest flaws and somehow appreciates them. Well, for me, it’s not imagination. It’s reality. It’s having a twin.

Having my twin, Stephanie, shaped a large part of who I am. Growing up, I was never just “Emily.” I was one of a pair of people named “The Knights.” We played the same sports, explored the same subjects, had the same best friends and shared the same morals. And yet we were two very different and maturing people.

As we grew up, so did our competition, which made having a twin difficult. It can mean comparison after comparison after comparison. And as we matured, we began to compete for recognition of each characteristic we wanted to own. Sports became competitive, yet encouraging. Academics became a basis of developing strengths and accepting failures. Friendships were always based on defending one another. If anyone were to speak badly of my sister, it wouldn’t end well. And as we continued to get older, things became even more complicated. We each began to feel like less of an individual and more like a pair. By the time graduation approached, we were definitely ready to part ways.

Don’t get me wrong—we are the best of friends. There’s no one in this world I would rather confide in and no one I’ll ever trust more. She’s my ultimate partner in crime.

But graduation was drawing near and Stephanie and I were scrambling to pick our future colleges. Having similar interests and passions led us to look at similar places. We both were set on running track and leaving the state. We took different recruit trips and through them experienced new moments with students that allowed us to not feel like half of a sum, but like an individual. There was one trip that we did take together, though. That trip was to Notre Dame.

The visit was something of dreams; stepping on campus felt surreal. This was my home. I knew it then and I know it now. But as luck would have it, it was hers, too. For some time we argued over who could claim this school as her future running ground until we settled on attending together. At first it was a struggle, but as time progressed and college drew near, it calmed our university fears. We’d automatically know someone we completely trusted and that felt incredible.

However, I had a dramatic first year at school. I experienced something unsettling and turned to one person when I needed it: Steph. At first I wasn’t sure who to run to because what I was dealing with was so personal. But I quickly realized that having an automatic source of comfort isn’t an issue—it’s a benefit. I sat with her outside her dorm room and realized I would never be alone. And it was in that year that I came to truly appreciate and understand what it means to have a twin.

Having a twin means having a partner in life. It means taking on battles with someone by your side. It means loyalty. Stephanie has given me strength, courage, grit and determination. I owe her everything because of the person she has made me and the things she taught me; like the fact that sharing isn’t always the worst thing in the world and that having a built-in therapist available 24/7 trumps everything. There isn’t anything I have to face entirely alone. Relentless competition or not, she will always be my greatest gift.