You are here: Home / Campus life / University of Florida / My Terrifying Elevator Incident in College

Freshman year, first semester. My roommates were all graduating seniors who knew each other since middle school. They pitied me. They invited me out to eat (“nah”), they asked me to join their smash games (“maybe later”) and they offered to give me my first alcoholic beverage ever (“my mom won’t let me”). Although I desperately wanted to make new friends, even the thought of social contact made me tremble.

My greatest fear was awkwardness.

I returned to school late one night to retrieve a textbook I left behind. I quickly found it and got in an elevator. As the two doors slid to close, a short Hispanic guy with glasses rushed down the hallway shouting “Wait!” I pressed close repeatedly (“Crap, crap, crap), but he somehow made it right on time by sticking his pencil right between the almost touching doors. The doors opened and I felt as if a spider with the head of an alligator had crept in and glared at me with a mouth drenched in saliva.

“Thanks for holding the door bud,” he said, smiling.

I nodded in response without eye contact and took a step back into the elevator railings. I pulled out my phone and scrolled through my home screen pointlessly to avoid any further conversation. He did the same, but he was probably texting someone for real. The awkwardness clogged the entire space, and I felt as if I was drowning. The heat boiled inside like a sauna and I caught myself wiping away the sweat that tried to get in my eye. I couldn’t breathe, physically and mentally. The elevator began descending—finally. Floor 3. Floor 2, and—still floor two.

As the elevator stopped descending, my heart tumbled down to the bottom of my stomach.

“I think we’re on the second floor. Help me open the door?”

I nodded and held on to the left door while he held to the right.

We tugged but the doors refused to budge. “Again!” Nothing. I thought I would die there that night with some random stranger, awkwardly.

“Yo, there’s an emergency button right.” He said, pointing at a bright red button beneath all other buttons. I pressed it non-hesitantly. Full panic mode. Doot, doot. “UF emergencies, how may I assist you?” a woman said through the speaker.

“What’s your elevator number?” she asked.

“Do you know what our elevator number is?” he asked, looking at me.

I glimpsed the red number imprinted on the side.

“Okay, hold on a second,” she answered. That felt like the longest telephone hold of my life, but soon after, the elevator began moving again.

I heard a sigh released as the elevator system operated. He turned to me and put his hand in the air for a high five.

“Thank god, I felt like I’m going to suffocate to death in here,” I said as I completed the high five.

“Yeah, you looked incredibly reserved and “to-yourself”,” he chuckled, “even before the fiasco.”

“I guess.” I looked off to the side

“What’s your name?” He asked, reaching for a handshake.

When the elevator doors opened back on the third floor, the cold AC blessed us like an angel. We decided not to take additional chances on the elevator and instead, took three flights of stairs down Turlington. He continued talking to me, asking questions like: “What do you like to do for fun?”, “What’s your major?” etc., etc. I answered, hesitantly at first, but opened a bit more as he persisted. He eventually became my first and best friend in college. He cranked open that elevator door inside of me and freed me.

Filed Under: Freshmen University of Florida 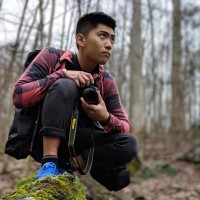 Zi Zheng is a self-proclaimed future movie star and great American author with impulsive tendencies to take pictures of random people and things.

The Truths and Lies of Sorority Life
Next Post: Reading ​Hamlet​ For the Seventh Time: My Takeaways