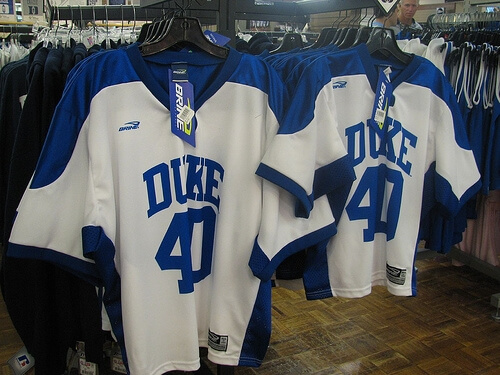 Succisa Virescit. Those are two simple Latin words, but they mean the world to Reade Seligmann,  former Duke University and Brown University lacrosse player.  They are so important to Seligmann and his brothers that they each tattooed the words on their bodies.  The Duke lacrosse team had the words engraved on their 2010 NCAA Championship rings.

The phrase means “When cut down, grow back stronger.”  It is the motto of Delbarton School, Seligmann’s high school, and it has truly epitomized his life.

“It represented everything we were going through at the time.  It stands for all the people who stood behind me including Delbarton,” Seligmann said.  “It’s a great code to live by.”

It has been over five years since the former Duke student was falsely accused of rape.  Seligmann was attacked in court, in the media, and by much of the country. He’s grown back stronger.

Duke University suspended Seligmann because of the accusations and showed him little support. He responded by leaving the school.  He enrolled at Brown in the fall of 2007 and quickly became acclimated to life there.

“I felt very fortunate when I got the letter to go to Brown,” Seligmann said.  “Brown became my home away from home.  I love Delbarton but Brown was like another family for me.”

Not only did Seligmann find success socially and academically, he also found it on the lacrosse field.  The Bears won the Ivy League championship twice during Seligmann’s time there. Before Seligmann arrived, Brown hadn’t won a championship in 15 years.

“I got there and was at the right place, at the right time,” Seligmann commented.  “It was a great experience.”

Seligmann was not just a member of those championship teams, but a major asset.  Brownbears.com called him “one of the best feeding midfielders in the country.”  In 2009, Seligmann was Brown’s fourth leading scorer and won the Jim Trepper Award as Brown’s Most Improved Player.  In May 2009, he also received the Delbarton medal, the highest award given at that school, for his strength through adversity.

“That was one of the greatest honors of my life,” Seligmann said.

After graduating Brown in 2010, Seligmann followed his passion for justice and enrolled at Emory Law School.  Seligmann always considered going into law, but the Duke case clearly provided an extra impetus.

“I was interested in law before, but that really showed me why I wanted to become a lawyer,” Seligmann said.  “It helped me to see how influential a lawyer can be in someone’s life.”

The Brown graduate has now taken a path in life that he feels is right for him.  It is a path, which may have been different if the events of May 2006 had not occurred.  “Once you start pursuing law, it feels like you are doing something right,” said Seligmann.

Five years ago Reade Seligmann was cut down, distraught in a courtroom. Hopefully soon he’ll be helping a kid like himself grow back strong.

Previous Post:A Zack Attack on the Apple App
Next Post:Catching up with The Book of Mormon Cast