My senior year of high school, my classmates got through the last few arduous months of school repeating the mantra: “We’re almost done.” They looked at college like the light at the end of the long, winding, catholic-private tunnel that we attended for the last four years. We had countdown calendars for graduation on every whiteboard and our faculty had nearly given up on enforcing the dress code. Joy and relief filled the air as acceptance letters rolled in.

I only felt anxiety at the thought of the culture shock to come my way.

Unlike my peers, I wasn’t sure if I wanted to let go of the small, private environment that I had taken advantage of for the past 12 years. I knew the names of every person in my class of 50 and saw them grow out of their awkward middle school phases.  So, I applied mostly to small, private, out-of-state colleges where I would feel most comfortable. The University of Florida stood out of my compact, expensive wish list as the only public college. I only applied to UF to be eligible for certain scholarships.

I had never been exposed to a class size bigger than 20. The idea of 50,000 strangers roaming the sidewalks of one campus baffled me. Through a series of events (unfortunate or otherwise), this public university became my most viable option. After committing to UF (and then whining through two month grieving process), I came to terms with my fate of feeling the culture shock of attending a school bigger than I’d ever known. I began the wait until June, when I would leave home and trade summer on the beach for air-conditioned classrooms in Florida’s very own swamp. (Yes, I had to start in the summer. Insult to injury? I think yes.)

Summer crawled along more slowly than I ever could have imagined. Even though there are always was fewer students on campus during the summer, I still had my fair share of issues adjusting to campus life. My light course-load and (unfortunate) lack of friends gave me a lot of free time, and since I had never “gone out” on a weekend before, I spent many evenings in my dorm watching the world outside my window. Time seemed to stop every time I set foot into my dorm, and I wasted away the hours devouring shows on Netflix and stalking my friends on Twitter.

After a few weeks, the isolation took its toll. Very little contact with anyone for such a long time made me lose confidence in myself, so I went home in search of familiar faces. Unfortunately, I’d only been bombarded by questions from friends and family that embarrassed me to answer. “How many new friends do you have? Are your classes interesting? How many parties have you gone to?” I would just giggle and tiptoe around giving an actual answer to hide how miserable I felt.

After summer ended, I took the two weeks before the fall semester started to think of ways to make friends and spend less time moping around in my dorm. On my first day of fall semester, I walked to the student union. I saw an ocean of people, more faces than I’ve ever seen at once before, all moving to different destinations. Each person went on with a life that I’ll more than likely never know anything about. I stopped in my tracks and stared into the sea of bodies, wondering what to do. I dove in and I discovered the true meaning of the term “student body.” I swallowed the nervousness I felt and began looking for clubs or organizations I was interested in. If something caught my eye, I would look into it. I probably walked up to more than a hundred tables in that first week.

Slowly, I’ve been learning from that first unbearable plunge into the culture shock of college life. Sure, adjusting from knowing every person in your class personally to knowing no one has its hardships, but desperation drives even the most reluctant of us to make new friends.

As for me, I know I have a long way to go before I’ll feel completely comfortable in this huge, public college, but I love watching myself grow with every passing day. I’ve discovered that imperfection makes everyone’s experience unique. Everyone has to struggle at some point.

…At least you’ll have something to laugh about later, right?

Filed Under: Freshmen University of Florida 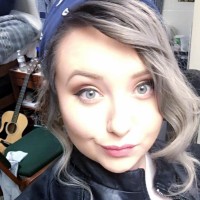 Florida native and freshman at the University of Florida. English major and lover of all things Beatnik and Jimmy Buffett.

CM’s Guide to Walla Walla University
Next Post: The 10 Best Bars in D.C. That Turn the City Into a Party