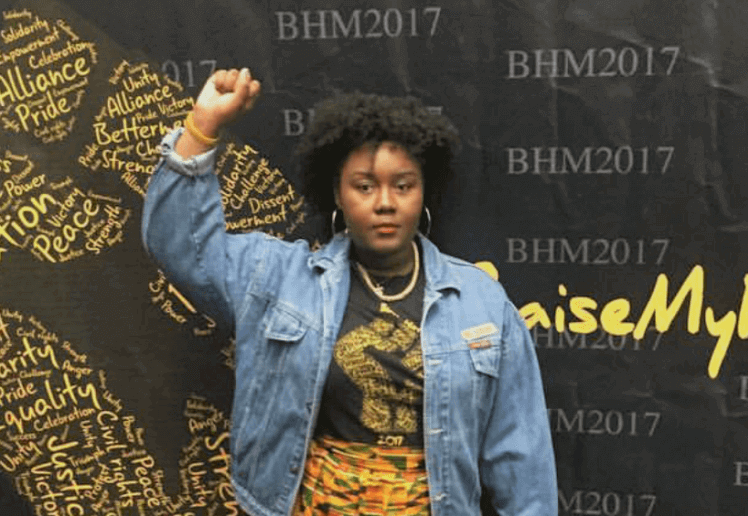 As February comes to an end, its significance doesn’t fade into the background. Leaders like Sapp make sure that the importance of Black History resonates throughout the year.

Sapp’s charitable parents instilled a knack for service at a young age. And she eagerly searched for her niche starting her freshman year of college. She joined BHM three years ago, first as a promo team member. Then she moved up to Program Planner and now serves as the Program Planner Director.

As director, Sapp’s aims to increase the attendee turnout for BHM events. “In the past the crowd turnout has been a problem. In order to educate, you need an audience,” Sapp said.

Her mission starts within the black community. Why? African Americans are one of the longest-standing minorities in America who have made significant contributions to the country. But we reap very little from what we’ve sown. Sapp said, “It is a time for one of the smallest—in terms of population—minorities on campus to come together and open up their history to those outside the black community.”

Increasing the impact of BHM within the UF community will take time. Sapp does note a time where BHM has impacted the surrounding community, including the Tacachale’s Center. BHM members treated disabled individuals to a day of pampering and encouragement. She also reflected on the thrill she experiences when fellow BHM members successfully turn an idea into a reality, such as the Save Our Minds, Save Our Lives event. This event educated its audience about mental illness within the black community.

As a leader, the importance of community is at the center of her heart . “In order for the black community to grow as a people, we must continue to stick together and help each other grow stronger and stronger and voice our opinions on politics,” said Sapp. Sadly, the lack of understanding and participation for African Americans in local engagements is a prominent issue within our community.

Also crucial to her mission is the importance of civil engagement. This includes meeting local commissioners and mayors, attending town hall meetings and educating the youth. She, like many blacks, bears witness to the significance today’s issues play on our community. This includes police brutality, mass incarceration and disproportionate areas of neglect and poverty, to name a few. “For some strange reason people automatically associate being black with being bad,” said Sapp.

Stereotypes still circulate about blacks, often getting labelled as “deviant hoodlums” by the media. Political commentators and reporters still express bias and are often misinformed. “Be an active member of the black community, help be the voice for change and not just some[one] who sees the need for change,” said Sapp.

A community is as strong as its people. It’s crucial that the people within the community know and understand their history. “In my opinion, slavery will always play a part in the progression of Black Americans—in order to grow, you must first know where you started.”

Sapp touched on the Voting Rights Act of 1965. She reiterated how it has only been 51 years since African Americans were legally, without any hindrance, able to utilize our 15 Amendment rights (granted in 1870). “That time frame in itself, just proves how slow and unaccepting ‘America’ is to change,” said Sapp.

As a junior, her time with BHM will be coming to an end soon. She encourages fellow UF students to get involved with BHM. “Some basic characteristics [to have] are [being] a good communicator and [being] honest. But in addition to those [qualities], a good BHM leader should first be hospitable. As a leader you have to know how to talk to people who are both against you and with you,” said Sapp.

Sapp gracefully embodies the spirit of a leader. She’s well informed about current events, eager to enact change and willing to wholeheartedly serve her team and the communities around her. The fluorescent flame coming from her torch will burn brighter and brighter as she continues to march on, stepping into new territory. We proudly raise our fist with her in unity.

Previous Post:10 UF Finals Traditions They Won’t Tell You About at Preview
Next Post:5 Ways to Survive Your Internship Far From Home