*Burroughs is the author of several New York Times best-sellers, including Running with Scissors and Dry.  Entertainment Weekly twice named him one of America’s funniest people. The 47-year-old currently resides in NYC with his (very recently wed) husband, Christopher Schelling.

“I didn’t even read a book until I was 24,” Augusten Burroughs casually mentions.

It seems impossible that a recurring New York Times best-selling memoirist just slipped that into conversation.

It seems even more impossible that his mother abandoned him as a child to be raised by her lunatic psychiatrist; that he was forced to fake a suicide attempt at the age of 13 in order to drop out of school; that he was given an electroshock therapy machine as a toy, sexually abused, and raised by a man who swore God communicated to him through his own feces; that he moved to San Francisco at 19 with only an elementary school education and astounded big wig advertising execs – even in the deepest pits of his alcoholism;  that he is an unmistakably famous author who admits “writer” was never a title he wanted.

“My mother was a serious writer…but also severely mentally ill.  Growing up watching her send her stuff off and be rejected over and over again, it just seemed like, ‘Oh my God, that is the last thing that I even want to think about doing,’” he said.  You could say Burroughs has led an unconventional life, so it’s expectedly surprising to hear he didn’t pick up a book until the age of 24 – and when he did, it changed everything.

He was working for an advertising firm in New York City at that time. “I won every single thing that I touched,” he said. But he got bored – it was too easy, and every client wanted a cookie-cutter campaign. He got so comfortable that an hour before a big presentation was enough time for him to build an entire campaign – “so I’d just drink,” he said.

Sometimes, he’d practically walk from the bar to a 9 a.m. meeting.  He hid seven-too-many-martini-nights behind professional dress: Armani suits, Gucci loafers, in-your-face ties, and hair so perfectly crafted it felt like it was carved out of wood.   Before a meeting with Fabergé, he sprayed Donna Karan for Men cologne on his tongue, hoping no one would notice he was belligerently belting out The Brady Bunch theme on a karaoke stage only hours before. They noticed; that was the meeting his business partner suggested rehab.

In an attempt to quiet his raging alcoholism – in a New York City apartment cluttered by empty Dewar’s bottles, stray food wrappers and dirty laundry – Burroughs picked up an electric typewriter. “I started writing because I felt like the machinery in my head and gears of my brain were just rusty and broken,” he said. “I couldn’t think and I didn’t even know what I was feeling.  Writing was a purely practical way to understand what was going on inside.” 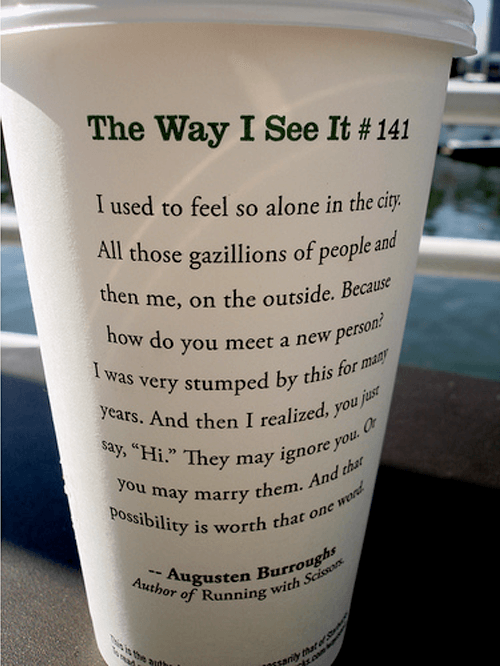 It wasn’t until much later he realized the little, black ink letters formed stories of absurd, real-life encounters that people might want to read — “actual writing” as he refers to it. Dry, the memoir documenting his battle with alcoholism, is nothing more than a journal he tossed at St. Martin’s Press – paragraphs written without grammar or literary style in mind; stories written with the idea they’d never be read. “I was flabbergasted that they were buying my journal – it’s like buying used tissues. I almost felt like it didn’t count because I hadn’t done it with publication in mind,” he said.

The fame didn’t hit him until his second book reading for Running with Scissors, his first memoir. He was standing in front of a crowd at Book Soup, a well-known bookstore in Los Angeles.  He doesn’t remember much from the reading itself, except that he was mortified. “I do remember looking at the L.A. audience, and everyone was so well-dressed and cool,” he said. “I felt like there was not one person there that was in my league. None of them would want to ever be my friend. There were celebrities there — these were people with $5,000 leather jackets.” 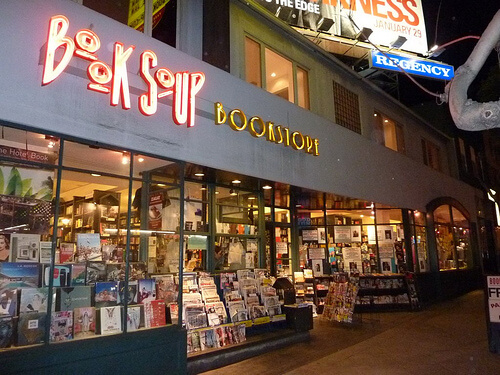 Burroughs stood before that audience and read aloud humiliating pieces of his eccentric childhood, despite sweaty palms and a tinge of regret for putting his wrecked youth into print.  It turned out those people wearing $5,000 leather jackets were more like his T-shirt wearing self than he’d thought. “Afterward, just over and over and over, all of these shiny, polished people came up and revealed all of these cracked, fragile, broken pieces of themselves,” he said. “It was very vulnerable of these strangers in line to come up and lean in close and say these incredibly personal things. It was shocking. And then it was wonderful. And I was never, ever self-conscious about it again.”

The book held strong as a New York Times Best Seller for more than four years and was later adapted into film. His works following Running with Scissors, seven of them, were also wildly successful. “I’ve published a lot of books since then,” he said. “There’ve always been people who have said ‘me too.’ It just makes me feel much more comfortable in the world. Not necessarily less like a freak, but more like it doesn’t really matter that I am. Putting myself out there knocked that thing inside me that was approval-seeking over the head with a stainless steel mallet.” 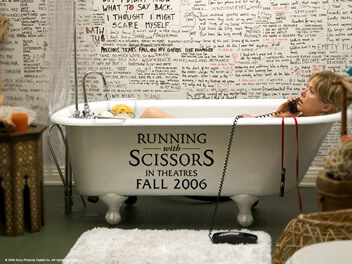 One thing you learn quickly when speaking with Burroughs is that he’s a total homebody. Even talking with me – a girl whose biggest claim to fame is interviewing a guy like him – his sentences are occasionally cluttered by re-dos. One-on-one interaction gives him anxiety, he favors working in his bed over a congested coffee shop, and would much rather watch people sing covers on YouTube than go to an open-mic night.  He really likes his dog. He told me he doesn’t feel the need to Tweet about his life because “people don’t give a shit whether I just vacuumed or not,” and on the off chance he is at a red carpet event, you will find him “definitely looking for the black carpet.”

That’s not to say Burroughs is unappreciative of is fans – it’s just that he is still a little caught off guard when someone can match his face to a 3”x 3” headshot slapped on a book jacket beside “About the Author.” Admittedly, he doesn’t do much with his fame. “You’re only as famous as your last Tweet in a way, you know?” he sighed. “You can be Jodie Foster who has won all of these Academy Awards and who is beautiful and smart and fluent in French and has directed films, but she’s going to be asked about ‘So what was that comment you made about what you had for dinner? Why do you not like peas?’ It’s that kind of thing. It’s funny, but I don’t have it in me to be interested in that.”

Considering anyone who opens one of his books falls in love with him by page three, his insecurities are baffling. Yet, he is in-your-face accepting of his self-proclaimed flaws. “I drive myself crazy with something always,” he said.  “I’ve been fighting against it for so many years.  If anybody could have burst through it, I would have. I accept it as that’s the brain that came from the factory.”

And though he blames his social deficiencies on a lack of formal education, he wouldn’t have it any other way. “I’m really grateful for a lot of reasons. One reason is that I never had anybody tell me what I could do or couldn’t do or what I should be or shouldn’t be.  And I’ve always felt like, if I want to do that, then that’s what I’m going to do then,” he said.

His advice for us college kids: Don’t fall for society’s definition of success. “In an ideal world you could engage in higher education when and where it was appropriate in your life,” he said. “College is tricky. We feel like it’s a greased playground slide into the future and into a happy career, and sometimes it is, but mostly it isn’t. It can be dangerous to define yourself before you have had a view of the large world around you. You’ve kind of got to climb up to the highest place and look around and see – you know, test drive different lives.”

Burroughs is currently working on three book projects.  His most recent work, This is How: Help for the Self, is on shelves now.

The Lockdown on Boston: A View from the Inside
Next Post: Slut: The Dirtiest Word In The Dictionary