Extreme Dance Company at the University of Florida is a Student Government-funded organization that has been home to at least 100 student dancers at any given time since its inception in 2002. As a dance company that helps dancers grow into choreographers and performers, Extreme is one of the most distinct dance teams at UF.

During auditions at the beginning of every semester, any skill level is welcomed and appreciated. Instead of having a selective audition process, turning away students who don’t have extreme (pun intended) potential, the company accepts everyone who attends auditions. President Michelle Donato said she loves this unique aspect because it brings everyone together, regardless of prior experience. “There is only one requirement for being a part of Extreme…show up to auditions, have fun and dance your heart out,” Donato said.

Auditions consist of a group warm-up component, and then existing members teach a short routine that is used as the audition piece. Extreme’s auditions are used to place dancers in different levels within the company. All students have the opportunity to express themselves and show off the talent they already have. There are four levels that dancers can be placed in: A, A/B, B and C.

Junior public relations major Brianna Hayes has been on the team for five semesters. Having trained in ballet, jazz, contemporary, hip-hop and tap since her freshman year of high school, she knew she had to continue dancing once she got to UF. “My freshman year RA was in Extreme, so I went to auditions and haven’t looked back!” Hayes said.

Though placed on level C her first semester, she advanced to level B her second semester, and by her third semester, she made it all the way to A/B. Hayes said it takes a lot of work and dedication to move up levels, but most importantly, it’s a matter of believing in yourself. “One great thing about the company is that we all push each other to be the best we can be,” Hayes said.

Even if dancers think they’re the Margot Fonteyns of their generation, there’s always room for improvement. Anna Hall has been dancing since she was six years old and was originally placed in level C. After all the training she received within the company, she can now sit all the way in her splits and can turn out more fouettés in a la second then she ever imagined. “I have definitely been helped a lot by older members with my technique,” Hall said. In addition to moving up levels, she has now holds a position on the executive board as one of the costume chairs who order dancers’ costumes and budget which dancers will wear what.

At the end of each semester, Extreme Dance Company hosts a showcase that’s free and open to the public. Each level performs an original jazz, contemporary and musical theater dance choreographed by level A members.

Dancers from all levels can choose to be in any optional dances, including hip-hop, ballet and modern, also choreographed by level A members. These optional dances give dancers the chance to perform alongside friends who are in different levels. This semester’s showcase, We’ve Got You Covered, will be held in the Curtis M. Phillips Center for the Performing Arts on November 20 at 8 p.m.

Rehearsals for the show are usually three hours every Wednesday, and all dancers must attend. Donato said that because people are busy during the semester and sometimes can’t commit, they often drop out. “It makes me sad when people have to drop because that is one less person sharing the love of dance,” Donato said.

Initially thinking of dropping out after only going to two practices, sophomore Ciara Conol ultimately decided not to because of the “family vibes” she felt from everyone around her. “I had never been much of a dancer; I always played sports. Seeing how great some of these dancers are made me think Extreme wasn’t right for me, but I met some really great people and couldn’t be happier that I decided to stick with it.”

Extreme Dance Company prides itself in comradery and facilitating everyone to unleash their inner tiny dancer. With its open auditions and room for students to develop into the performers they never knew they could be, this company certainly brings something special to UF’s campus. 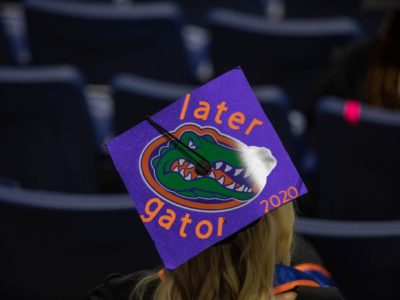