If I hear one more person say journalism is dying, I will lose it. Journalism is not dying, journalism will never die; it is simply changing. Well….not too simply. It’s actually becoming harder to get a job in the industry. In fact, according to the Project for Excellence in Journalism, a third of newsroom jobs in U.S. newspapers disappeared between 2001 and 2009. But don’t let those numbers discourage you – you can still get your foot in the door. You just have to get started now and build a #bomb resume to impress future employers.

University of Maryland College of Journalism internship coordinator Adrianne Flynn, said the little surprise of your resume is what you put in your skills and interests section, whether you’re a black belt in karate, fluent in American Sign Language or an expert cook. She also said it’s most important to be yourself when job or internship seeking because journalists like hiring people with some character and interests. Basically, show them that you’ve lived a little. “If everything is the same between two people−they both worked for campus media, had a real paying job, good GPAs−I am going to pick the person that interests me the most to interview,” Flynn said.

“Clips of any kind are still the currency of our business,” Flynn said. “It’s how you get a job in our business.” The minute you walk through the doors at college, start creating content. Dorie Clark, marketing strategy consultant, public speaker and author of  “Career Advice for Aspiring Journalists,” said that clips demonstrate your familiarity with the topic area you want to cover, your language and reportorial techniques. “The gatekeepers have largely come down and you don’t have to only have clips from internships or your college paper,” Clark said. Start your own blog, create interesting content and show you’ve developed a passion for the topic. It’s still the writing industry, so you’ve got to show employers that you write, and you’re damn good at it, too.

Get Involved on Campus

Extracurriculars−do them. “Get involved with more campus publications, TV stations, radio outlets, etc.,” Washington Examiner web producer and UMD alum Josh Axelrod said. He worked at the campus newspaper, The Diamondback, played intramural soccer and edited for CM. Axelrod had four internships before securing his job at the Examiner, but he recognizes that he did things the hard way. “That route is much more difficult than just doing things on campus and hoping for the best elsewhere,” he said. College media outlets are always looking for more genius writers like you to join the team and create killer content. Take advantage.

Learn to do Things Other Than Writing

So you’ve expressed how cool you are, and you’ve used your clips (in whatever form they come) to demonstrate that you’re a kick-ass writer. You now have to become that jack-of-all-trades. Axelrod said this is what helped him secure a job with the Examiner. “I’m pretty sure what impressed them the most was that I had a background in both web production and copy editing, two highly sought after skills in the journalism industry,” Axelrod said. Flynn said to do whatever possible to boost your professional credentials, whether producing media for your university or always towing a camera around campus. “Even if you want to be a writer, your photographic eye is going to be a great benefit,” she said. And coding isn’t only for the computer scientists anymore, either. If you really want to step up your game, spend time learning to code and to create a website. Another skill in your arsenal can’t hurt.

Tweet, tweet, then tweet some more. According to Clark, it’s crucial for aspiring journalists to invest time and energy in building a social media presence and a following. If you’re going to spend all that time writing a blog, don’t you want people to read it? Mainstream media publications know that social sharing is vital to future success. Clark said to post regularly and on a relatively narrow band of topics. If you want to be a political journalist, write and post about politics. If you want to be a lifestyle journalist, post about travel and food. If you want to be a tech journalist, take a wild guess at what you should be doing. This way you can create your own “brand” and your followers will know what to expect. “Your tweets shouldn’t be a random amalgam of personal life and everything under the sun,” Clark said. “The majority should be as though you already have the job you’re aiming for.” 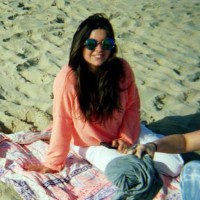 10 Mistakes to Avoid Your Freshman Year
Next Post: The Easy “A” is a Myth