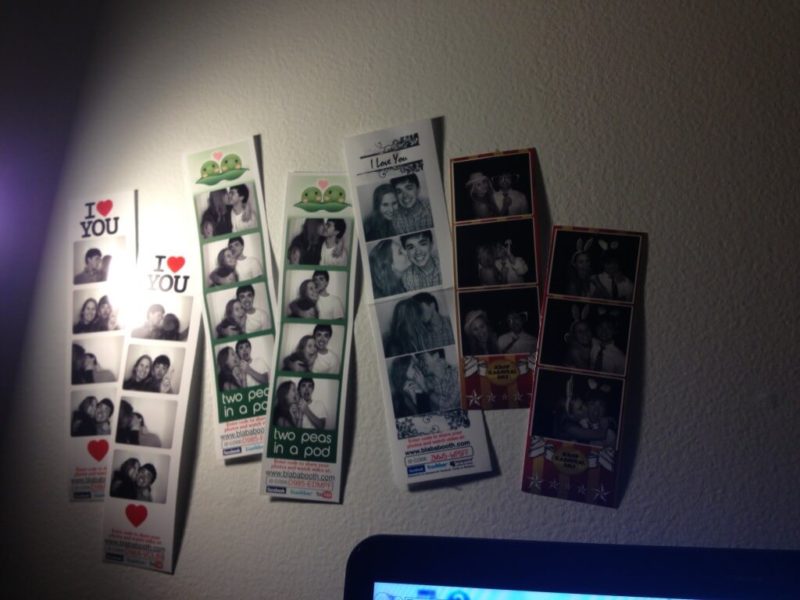 To My Box Full of Memories

When I was 16, you hid yellow post-it notes around my desk that said “I love you” two weeks before actually admitting it to me. I remember lying on my twin bed, my Beanie Babies staring at us almost as if they too were waiting for the words to come out of your mouth. “I love you,” you said. You kissed me and then smirked, getting up to show me the notes you wrote me and from then on, I loved you.

Yet why is it that for the past two years I can’t remember you as someone who made me happy? When we first broke up, you were no longer labeled as my best friend, my first love or even Matt—instead, you became my ex-boyfriend. The one my friends would forever hate (and make fun of), the one my mother swore I would never marry and the one my dad remembers as a “nice boy.”

The truth is, I never thanked you for showing me how great it is to be in love with someone.

So I decided to change the way I think of you. I’m about to graduate college, and if I continue to see you as “my ex,” I would be ignoring the special place I hold for you in my heart. You’re not my ex-boyfriend—you’re my first love. You took away my v-card. You took me to prom twice. You brought me a balloon that said “Get Well Soon” when I stayed home the day my brother moved back to Argentina. You saw me cry when I withdrew from early decision at my dream school Syracuse University because I couldn’t afford it.

Worst of all, you spoiled me with love and affection so that no guy for the past two years could replace you. It’s rare to find a guy in this hook up culture who will surprise a girl with peanut M&Ms whenever she’s sad.

Last year, I opened the box of our old stuff that defined our almost three year relationship. You wrote at the bottom of one of your letters: “I will be in love with Sharon Ailin Szmuc until the day I die” and in the past, that letter made me cry. When you started dating someone else, I figured that no one would ever love me like that again.

Last week, I read the letter again, and this time, I laughed. What the hell did we know at 17 about loving someone until death? The only person I should be in love with until the day I die is myself. I used to sob over these letters and memories, thinking I would never find someone like you again.

I laughed even more when I came across a drawn photo of two stick figures making out, a thank you note you wrote my parents when you first came over for dinner and of course, an empty condom box.

I spend so much time telling guys I date that only a month after you and I broke up, you already had a new girl and lied to me about her. I tell people I meet that you caused my depression and said spiteful things  against my religious beliefs. Many of my friends said you look like the cartoon Jake Long: The American Dragon or even a clone of Seth MacFarlane, but no one ever referred to you as the guy who had once given me the world.

So this is my last time calling you my ex-boyfriend. I should remember you by how we used to lick each other’s faces to make the other laugh or how I finally understood baseball because of you—not by the misleading phrase “my ex.”

For the past two months, I’ve been seeing someone. He’s definitely not like you, but I like that about him. I like that he’s not as open as you because when I first met you, you weren’t such an open book either. But he supports my ambitions and keeps me grounded.

I don’t know what’s going to happen with us, but I do know that if our relationship doesn’t work out, he won’t be my ex-boyfriend, he’ll be the guy I enjoyed drinking wine and eating sushi with on his bed and the guy I can stay up with until 5 a.m. watching Lil Dicky music videos. How can I label him (if we don’t work out) an ex-boyfriend and not a friend, lover or a box full of memories?

So here’s to you Matt, not my ex-boyfriend, but my first love. Thank you for giving me a box full of memories. When I discovered you were accepted into law school, I felt beyond proud of you. I remember how hard you worked in high school at Smoothie King when you didn’t know what you wanted to do with your life. And here you are, an almost college graduate and a soon-to-be lawyer.

So before you take your bar exam, and before I go off to New York to land my dream job, I have to move on from this notion that you are my ex-boyfriend and that I should hate you for all eternity. The truth is, I don’t hate you. I am so proud to see someone I was once in love with achieving his dreams.

So I hope when you look back on your life you remember us as two kids who thought at 17 they would love each other until the day they died. Matt, think about this—we’re no longer together, but we’ll be each other’s first love, not ex, until the day we die.