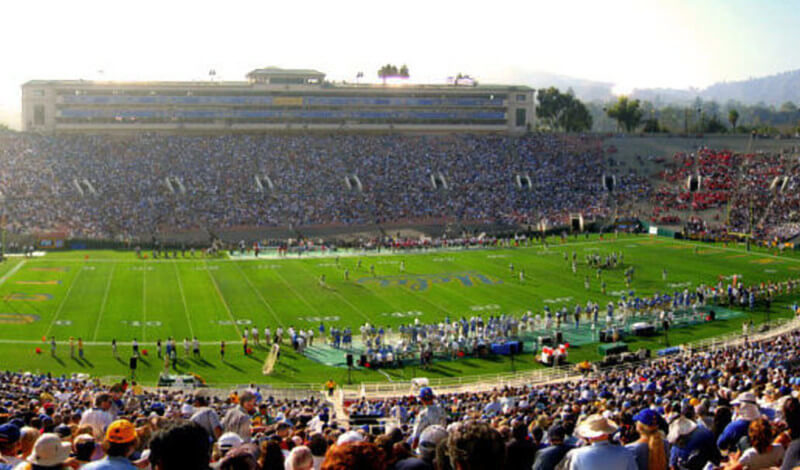 Lily HolmesApr 19, 2018
Home » Latest Posts » What It’s Like to Stumble Into VIP Status at the Rose Bowl
FacebookTweet

On the first day of 2018, my friend Lucy and I were lucky enough to attend the 55th annual Rose Bowl in Pasadena, California.

As a University of Georgia student, I knew that the day would be memorable—but I didn’t expect it to be literally one of the best experiences I have ever had.

First of all, it doesn’t get much better than going to the historic Rose Bowl Stadium in Pasadena. There is no such thing as a bad seat there, and our cheap-as-we-could-get-them tickets proved to be of the same caliber as many fans who probably paid double.

I was more in awe, however, of the fact that Georgia had even made it to the Rose Bowl considering its, quite honestly, depressing last few seasons of football. This year, we played an outstanding season, ranked No.1 and were dubbed SEC Champions. We were just pleased to have made it.

The day began with the classic Parade of Roses, with floats miraculously made entirely of roses. Afterwards, on our way to the buses that would take us near the stadium, in a crowd of hundreds we stumbled upon two of my other best friends, Courtney and Emily, by utter coincidence standing next to one another in line for the shuttle. We sat on each other’s laps as fans piled on the bus headed towards the stadium. After a quick photoshoot outside the iconic Rose Bowl Stadium, we said goodbye to our friends as they parted with their respective families and were on to our next encounter.

My uncle David has a knack for knowing just the right people. He helped us get our tickets at face value from a colleague. He was also in Pasadena that day and we planned to meet up despite his exclusive VIP tailgate status.

However, after chatting with my uncle across red-rope barriers, the VIP designation seemed like something we thought we could overcome. Why don’t we just try? We thought.

I was up first.

We threw around phrases like, “I only get to see him every once and a while,” and “She’s my niece, can’t she just come in?” After a surprisingly brief negotiation with the velvet rope attendee, I made my way into the enormous white tent alongside my uncle. I left my friend Lucy and her mom outside the tailgate and began to investigate what I could do to get them in.

Luckily, the VIP tickets were simple passes on lanyards with no name or photo identification, so we snuck outside to pass them to Lucy and her mom, and afterwards they breezed inside like true VIP members. It was like watching people pass back fake IDs outside a freshman bar in Athens.

Inside stood huge flatscreens, endless buffet food, a slew of bartenders serving drinks next to ice sculptures of the Georgia “G:” anything you could want at a tailgate. All for free (well, for us).

You could say the first hours of our year were going well, and the game still had yet to start.

The rest of our evening consisted of a game that shaved years off our lives. The air started to chill, but it didn’t matter as we kept warm by jumping up and down, clenching our fists and tensing every part of our bodies out of anxiety watching each play.

After a 14-point halftime deficit, UGA came back to even the score 45 to 45 pushing into overtime, followed by Sony Michel scoring the winning touchdown for the Dawgs in the game’s second overtime. We were going to the national championship.

Despite our team’s loss later down the road to Alabama, that day will still be one of my favorite days of 2018—and maybe even college thus far. Looking back, it’s hard to believe I even debated going. Would it be too difficult scheduling over break and traveling to California alone? Should I really spend hundreds of my own dollars on a ticket and traveling?

In college, we often think we aren’t up for doing things because we can’t afford it or it’s too tough to work into our jam-packed lives. This trip and experience taught me how to realize in the moment an opportunity I’d later regret skipping out on, and that spending time and money on experiences is worth the expense.

Previous Post:Top 10 Ways to Get to Class Fast at UMD
Next Post:How to Become a Personal Trainer