10 Complaints UNC Students Can’t Get Over

Let me start by saying: Let’s. Go. Heels. We bleed Carolina Blue and we’ll cheer for this team as hard as the day is long. But it’s not all sh–ts and giggles down here in Tar Heel country. We want to raise some concerns about UNC as an institution. From the lack of parking to the presence of Confederate soldiers on campus, UNC needs some change.

Read up on UNC’s 10 most glaring shortcomings that you won’t see in your acceptance letter.

We don’t know how tuition works, exactly. We do know that every out-of-state student detests their tuition price. “I’m from Baltimore and the out-of-state tuition is crazy,” University of Carolina-Chapel Hill junior Nate Rapuano said. We get it—in-state taxes pay for in-state students—but at $40,000 a year, you might as well put a down payment on a house.

You’d think that UNC would want their students to be able to get into classes, since that’s what college is all about. When we asked UNC senior Karl Vonzabern about ConnectCarolina, he couldn’t think of much good to say. “Registering for classes my first two years was basically impossible,” Vonzabern said, “I just had to try to get into any classes I could.” If you don’t go to UNC and don’t know the perils of ConnectCarolina, consider yourself lucky. It’s slow as molasses and the user interface looks like it was designed before the Internet made it to household computers. Registration is already stressful, and ConnectCarolina adds fuel to the fire.

Remember in high school when teachers placed Scantrons in front of you for free? Many of the tests at Carolina require students to purchase a Scantron and a “blue book.” Students already hate exams but UNC’s system definitely makes them worse. Requiring students to buy their Scantrons contributes to the theory that UNC acts like a relentless, money-guzzling institution. “I don’t like that we have to get our own Scantrons and blue books. I always forget to do it and then I’m scrambling at the last second,” said sophomore John Babcock. We’d be overjoyed if UNC would just funnel $0.25 out of our tuition to buy Scantrons for us. Another alternative: cool it with all the tests.

We’re all living in 2018 while UNC’s stuck in the mid-1800s. C’mon, Carolina. Students have protested that thing for years. “White supremacy isn’t going to come down when you take down the a statue,” senior Alex Johnson said. But while it still stands, Johnson said it doesn’t foster an environment of inclusion. Coming from a true Carolina blue Tarheel, we don’t want to send any message of white supremacy to those walking around North Quad.

Those brochures that advertise the diversity at UNC don’t mention that the group of diverse students on the cover live underground where no one else can see them. “One of my biggest issues with UNC is the promotion of a diverse, inclusive and safe community on paper but when it comes to executing these inclusive systems there seems to be a lack of effort. The student body population is largely reflective of that with only eight to nine percent African Americans,” junior Alexis Hinnant said. When your brochures show P.O.C. but the quad doesn’t, students start to question the truth of other claims about their new whitewashed home. Let’s practice the diversity we preach.

6. Avoid Davis’ Bathrooms at All Costs

Sometimes you just need to slip into a Davis Library bathroom to wash your hands. When you do, brace yourself for the onslaught of disgusting smells. “Davis’ bathrooms make me want to die,” said sophomore Tyla Gomez. We know everybody goes there to do their business after chugging their pre-exam stress coffee—but holy cow. What if you just want to check your hair or something and then you get stuck there standing in the funk? Totally uncool.

7. Arts Everywhere is All for Show

What if your school praised your major a ton, just for you to learn that they don’t really care? The Daily Tar Heel recently exposed the “Arts Everywhere” program as being merely a show for prospective students and the press. UNC laid off a favorite art professor, Brian Garner, despite his 5.0 rating on ratemyprofessor.com. And even worse, the Hanes Art Center roof reportedly leaks in multiple places. We can’t help but wonder why the art department runs into so many budget cuts right after the “Arts Everywhere” campaign. Art students only ask to keep their cool professors—and to keep their work away from drippy ceilings.

We all want to do well in our classes but why do we have to take every grade so seriously? Going to such a competitive University can put a lot of pressure on students. “I think my least favorite thing about UNC is the culture of academic stress that builds on itself,” sophomore Barbara Ramsdell said. Everyone seems to hold themselves to such a high standard. It leads to an almost toxic sense of competition. UNC, let’s all take a deep breath (and cancel all future tests and finals forever… multiplied by infinity).

As students, we want advisors that can help us navigate the system without making us feel like our dreams will never come to fruition. At UNC, finding a helpful advisor feels like finding a needle in a haystack while around 18,000 other students also rustle around that haystack looking for the needle. So many advising visits end with more questions than answers. “My first semester I took a several hard classes that I didn’t need to take because advisors had recommended them to me,” freshman Gabby Cole said. “Every time I go in there they question my major.” We’d like to see advisors supporting students and helping them achieve their goals.

10. Forget About Trying to Park

Don’t even think about bringing a car to campus, unless you can live with with paying huge fees for parking or spending hours finding a spot. “Parking is terrible. That’s my one major qualm with this university,” senior Lindsey Helms said. To make matters worse, UNC uses a ton of space to build new athletic facilities, while students and workers park two miles away and bus to campus. On top of that, when it snows and the buses don’t run, staff members walk two miles to campus. A suggested alternative: build another parking garage for goodness sake. 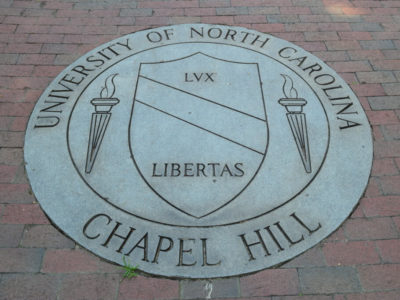 Powerful Women Leaders: Melissa Richmond
Next Post: 24 Things to Do in Buenos Aires in 24 Hours