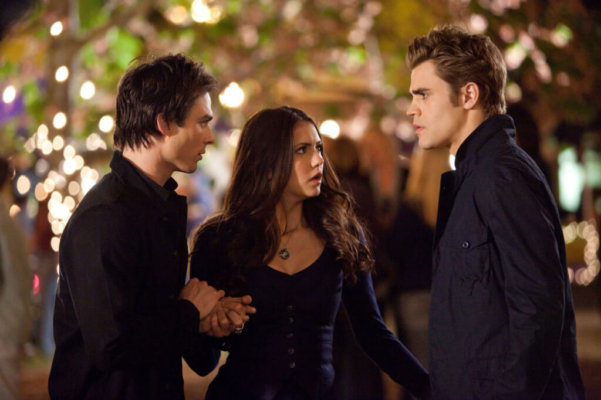 The Vampire Diaries Threatened My Identity

I, like most young girls in the 2010s, read “The Twilight Saga” by Stephanie Meyers. I picked a side—Jacob, for the record. I saw the movies more than once. But, my mother deemed “Breaking Dawn” too inappropriate, squashing my blossoming love for vampires. Convinced this was the end of sparkling immortality for me, the CW’s “The Vampire Diaries” took me by surprise my first year of college.

Suddenly, I had picked a new side—Damon, for the record. I was back in the vampire fan section.

To make it even better, my best friend told me about this class in the honors college that focused all on vampires. I knew I would shine.

Or so I thought.

HON-H212 “Vampires in American and European Cultures” met in a narrow room on the first floor of one of the dingiest dorms on campus—the sweaty sock smell proved it.

On the first day of class, Jeff, as I now lovingly call my professor, quickly informed us that this course would not focus on the beautiful, rock-hard vampires we worship these days. Instead, we would start with folklore, looking back into the mythic belief in vampires.

Vampires were the only answer for the puzzling deaths of whole families in Eastern Europe almost a millennium ago, which we can now explain away with an understanding of disease. But the vampire also became a societal warning: Don’t take too much in this life. Steal, drink too much, die too early or too late and you’ll come back as the blood-sucking undead.

As we read the best of vampire literature from the 19th century onwards, I was captivated by the vampire as this shape-shifting, undying metaphor.

Whether they symbolize sexual promiscuity or big pharma, our deepest fears get personified in them. When it came time to write our first paper, we had to analyze the metaphor of a specific vampire in a current movie or television show. Choosing “The Vampire Diaries” seemed like an easy little paper that would give me an excuse to re-watch the series.

Nine pages later, I turned in what I thought was a smart, informed commentary on how the Salvatore Brothers reflected growing income disparity and the housing crisis of 2008.

When Jeff handed my paper back to me a week later, I got confused. There was no grade.

He told me that I needed to rewrite it before he could even grade it. It was that bad.

I am a straight A student. I got B’s on some assignments, sure, but not such a low grade that he didn’t even want to write it down.

I rewrote and rewrote, met with him countless times, trying to get at what I missed. Apparently, the metaphor wasn’t for the great recession but for the heroin epidemic. My idea was off, sure, but my writing itself was weak.

I consider myself a decent writer, an analytical thinker and a good student and this evaluation didn’t align with my conceptualization of myself.

I got an 84 on the rewrite. Even with copious effort, I still couldn’t score higher than that. Was this class, one that I took on a whim, one my mom said I was foolish for taking, one that was supposed to be fun, going to wreck my confidence as a student? As a writer? Earn me my first B in my life?

I know, that sounds obnoxious. It’s just one B. But, it was more than that. My grades were the basis for how I saw myself. If I couldn’t write well or craft a solid argument, I wasn’t who I thought I was.

I decided I would not allow a paper on “The Vampire Diaries” to have this much power over me. I still had time to make up for this grade and I did.

While “HON-H212 Vampires in European and American Cultures” ultimately didn’t blemish my report card, it tried to tarnish my idea of myself and the value I placed in my intelligence. I had to recognize that only my evaluation of my ideas really mattered. If I had given it my all, I wasn’t going to be ashamed of my work.

My passion for immersion into niche topics deserves more value than arbitrary grades. I walked away from that grimy classroom believing that I can rise to a challenge. Oh, and that vampires are real.

Previous Post:Cramming on a Time Crunch: 10 Tips to Make Procrastination Less Dreadful
Next Post:The 10 Quirkiest Club Sports at the College of William and Mary