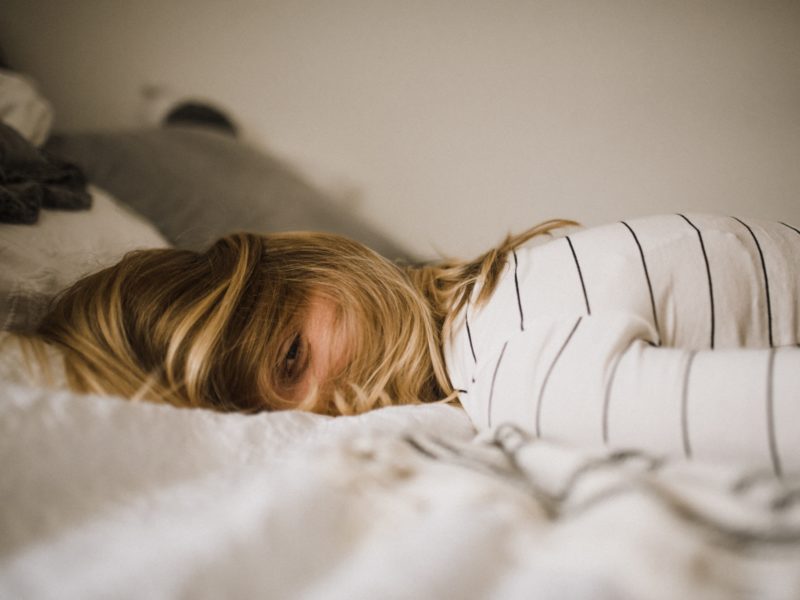 Sleep Is Not for the Weak

Ashley TrotterOct 29, 2018
Home » Latest Posts » Sleep Is Not for the Weak
FacebookTweet

Fatigue settles in slowly. Like getting the flu, insignificant changes are not noticeable at first. One night with six hours of sleep isn’t really that bad considering everything. But as freshman year began to become something corporeal, the feeling that I arrived at an extended summer camp slowly faded.

I realized I was really tired all the time.

Throughout my high school years, I would not say that I got much sleep. Theatre practice held me at the school until seven at night. Dinner, a shower and homework awaited me at home. If lucky, I would crawl into bed by 10:30 p.m. But I always cut it off at 11.

School started at 8 a.m., so naturally, an 11 p.m. bedtime seemed plenty late. In the mornings, I would wake up at 6 because I lived half an hour from school. This seven-hour-a-night sleep schedule worked wonderfully for Mondays and Tuesdays.

But by the time the second half of the week rolled around, I morphed into a zombie: eyes red and squinty, body lethargic. And my mind wandered terribly causing me to doze off from the present moment—especially during AP Physics.

Once college began, I assumed all would change. Older friends who had gone to college all recounted about the naps they took. With so much spare time in college, they were now “free.” Entering into college myself, I held expectations based on such preconceived notions described to me.

Nothing could have been more wrong.

College began, and with it, the excitement of the new, the making of friends, the insane desire to try out new things and go to new places. And I wanted to do everything right at the beginning of the year.

Suddenly I found myself returning to my room at 1 and 2 a.m., getting back late from hanging out with new friends. On school nights, my homework dragged later and later. I had a horrible tendency to put off or disregard completely the true extent of the amount of work I needed to do.

This created a lack of sleep during both the morning and night: I had to rise early for class, and work demanded I stay up later and finish it.

At first, I used the old “I’ll catch up on the weekend excuse.” But I learned rather quickly that weekends in college were very different from weekends at home in high school. Friday and Saturday nights were not in the least times suitable for sitting down and doing some Calculus—they were for going out.

All my friends would harp at me, urging me to go out with them, saying that it was Saturday night and no one does homework on a Saturday night. I believed them. I didn’t know anything else.

The six-hour nights became every night.

The small hours of the night became well-known friends. One night, around 2 a.m., I recall sitting in the lounge of my dorm building, pouring over my Origins of Evolution homework, prepping for the exam that next morning.

In total desperation, I scanned through my notes blindingly fast. The information couldn’t be gleaned fast enough it seemed. Yet nothing of significance remained in memory. I sat in a natural science spiral: dates and vocabulary terms swirled around my mind. After sitting there for over an hour, I finally became conscious of the headache that screamed at me to go to bed.

The modern stigma which surrounds the topic of sleep is that sleep is equated with laziness. Perhaps this is because lazy teenagers claim they spend their time sleeping. Or it could be that the activity of sleep takes away from time that could otherwise be used to achieve something productive. People desire to feel productive and strive toward accomplishing work.

However, sitting in the study lounge at 2 a.m. I realized that I was far from “being productive.” Sure, my notes might sat splayed before me in their neat handwriting. My laptops sat open to the study guide I made, but none of the material came together in my mind. And that’s what actually mattered.

In that moment, what I needed to be successful wasn’t to continue forcing my mind to do work it was no longer capable of. I needed a long sleep.

That late night was one of my last late-night study sessions. The results of my exam proved to me that it hadn’t been worth it anyway. But it also made me change my sleep patterns. In need of help, I Googled sleep advice: how to sleep better, get more sleep, manage time with sleep in mind. I found many answers that seemed too far out of my daily habits to be reasonable to adapt.

Of course, my adaptation to this wasn’t immediate, but it wasn’t difficult. So I thought why not?

Having a bedtime proved worth considering. The consistency of going to bed around 11:30 p.m. allowed me to have a cut-off time, get in my jammies and go through a nightly routine that ultimately resulted in better sleep quality. And those nights with lengthier sleeps now let me do my work and daily activities productively.

Previous Post:Suits Really Aren’t My Thing
Next Post:Anyone Wondering If Study Abroad Is Really Worth It?