The Tar Heels Can Finally Breathe After Their March Madness Redemption

No place in the world feels as happy as the University of North Carolina at Chapel Hill right now. The Tar Heels cut down the nets in Phoenix after a thrilling victory for the NCAA title over Gonzaga University. Now that March Madness 2017 ended, UNC fans can finally exhale. Who doesn’t relate to the feeling of picking yourself up after you fall?

After losing the final game to Villanova University one year ago, fans and players have been waiting for a long time for redemption. They were ecstatic to see Justin Jackson complete the go-ahead three-point play that the Heels didn’t look back from. UNC’s storybook run has healed all wounds inflicted by Kris Jenkins and his miraculous three-point shot in the finals for Nova in 2016. Their victory this year seemed like destiny.

UNC junior Kristen Luft watched the game at a friend’s apartment when the Tar Heels won the game. “Everyone was screaming and running down the stairs to run to Franklin Street,” said Luft. “Rooting for your school with so many other people is one of the coolest feelings in the world. It’s a moment where you feel really alive, and even though you’re surrounded by thousands of strangers, you feel so much more bonded to your school.”

UNC junior Matt Sclafani made the trip out to Phoenix to see the game in person. “Everyone there knew that they were witnessing something special, something they’d tell their children about one day,” said Sclafani. “It’s definitely an experience that I’ll remember for the rest of my life.”

Sophomore Elizabeth Jackson was at the game as well. “Obviously, no one wanted a repeat of last years’ loss, so everyone was on edge pretty much the whole time,” said Jackson. “In that moment where we sealed the victory, everyone lost their minds. I was jumping and screaming and nearly crying, and people were packed up at the front of the student section trying to get as close to the court as possible.”

Rebekah Escala has been a UNC fan her whole life. “[My mom] spent most of her teenage years and beyond in North Carolina, so it was inevitable for her to start liking either UNC or Duke. She chose the good guys…When I was growing up, it felt like UNC basketball was always on the television. So I grew up loving them too. Tar Heel born, Tar Heel bred,” said Escala. “When that final buzzer went off and the confetti came down in UNC’s favor this time, I actually started sobbing because I realized just how big that moment was. Those players were finally getting the ring they nearly had last year.”

UNC was led by Joel Berry II who scored 22 points in the 71-65 win in Phoenix for all the marbles. Berry requested a timeout before shooting free throws towards the end of the game to get a hold on his emotions. On top of winning the national championship, the NCAA crowned Berry the Most Outstanding Player of the Final Four. Isaiah Hicks and Justin Jackson were also key to sealing the victory for the Heels.

“When Hicks made that ridiculous shot within the last minute, everyone got really excited. But when Jackson dunked it, that excitement turned into insanity,” said Jackson.

After the win, the Heels acted extremely graciously to Gonzaga. The team definitely gave them a run for their money. In turn, the Gonzaga fans graciously accepted defeat.  “All of the Zag fans I ran into congratulated us on our win and were very kind. I felt bad because they came so close to winning,” said Jackson.

Clearly a very talented group, Gonzaga wouldn’t surprise anyone by making their own redemption run for the title next year. 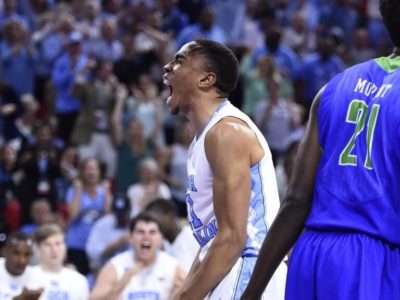 Basically Everyone Is Celebrating March Madness Upsets With UNC