Hope and the Middle East: Thoughts on Afghanistan

For most of us, the Middle East seems like a far-off land, enamored in conflict practically since we were born. Most recently, a victim of the seemingly never-ending series of conflicts has been Afghanistan, where the country capitulated to the Taliban forces—a struggle that lasted for much of the 20th century. It seems almost every day that the news reports of a detonated bomb, or a child went missing somewhere in the Middle East; death is just a symptom of the region.

But for a lot of us around the world, the region stands for more than that.

It’s home to friends and family, the memories of where we grew up or it represents the cradle of our culture. In the Middle East lives our hope for a brighter future filled with peace and security, the threat of bombs only a distant story—but this thought feels so distant at the moment.

I approach the start of my senior year soon, and while a reason to celebrate, it became a source of anxiety. I think often of what life will look like outside of school. I find myself questioning what I will accomplish, what I will contribute and where I will take my education. And I dream of telling stories and writing novels that change the world, like the books I read as a teenager.

However, I realize what a privilege it is for me to dream so large.

Afghanistan, home to more than 40 million people, bleeds as its people suffer under the rule of the Taliban. The group is responsible for ethnic cleansing, cultural genocide, human trafficking and despicably violent acts against women and children. The Taliban’s hold on power resulted in a complete withdrawal of women from society, banning them from universities and schools, forcing them to wear burqas and subjecting them to harsh punishments if their laws get disobeyed.

Under the false interpretations of Islam, the group seized any opportunity for women to move independently of men or pursue passions like writing or music.

One would understand, then, why children, relinquished by sobbing mothers, found their way in the laps of strangers and armed officers leaving the country at the Kabul airport. The desperate hope for a brighter future for their children pushes families to sacrifice their young kids’ safety and wellbeing. However, if the many citizens seen flocking to the capital cannot find refuge away from the lethal hands of the militant group, they risk punishment from the new regime.

Yet, reading or writing about the atrocities of war remains vastly different to experiencing it face-to-face. The people of Afghanistan are suffering on a daily basis. Most recently, the threat of a suicide bomber, suspected to be affiliated with ISIS-K (the branch of Islamic State active in the Khorasan region), prompted a US-led drone strike. Detonated in a residential area, the strike resulted in the death of reportedly nine civilians, the youngest of whom was a two-year old girl by the name of Sumaya.

The people starve at the hands of their oppressors, they are killed by unmanned foreign drones, unable to look their killers in the eye. Under threat of abuse, they are forced to comply with laws that deprive them of the basic human rights.

The Afghan people are suffering. And so are the people of Palestine. And the people of Yemen. And Syria. And Libya. And Iran. South Sudan, Iraq, Lebanon, Egypt—the list goes on.

My education awards me the opportunity to forge for myself any path towards what I want in life: I can write, tell stories—and speak on behalf of these people. So, I am here to tell you that we need to help. Reaping the repercussions of past generations’ failures, we now witness, first-hand, the consequences of mistaken ideologies; climate change may be reaching irreversible effects, millions of refugees may never return home and misinformation and bigotry continues to divide people. If we don’t try to fix things now, there may be nothing left for us in the future.

I ask that you do your best to remain present and educated on issues that arise in the Middle East, that you raise awareness and amplify voices of change, that you donate if able and lastly, I ask that you hope. I hope that peace and prosperity will soon dawn on the region, and I hope that the people of the Middle East create a world that provides for the safety and well-being of its citizens and we can be part of that in some way. 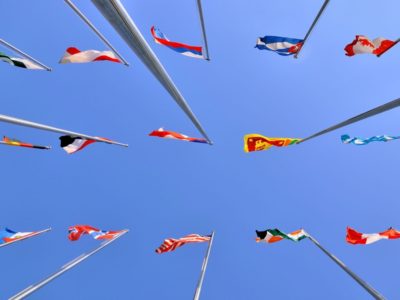 Previous Post:How My Freshman Year Plans Got Turned Upside Down
Next Post:I’m So Grateful for My Ex… Best Friends