You are here: Home / Life / From Swimmer to Swammer: Self-Discovery in College

My senior year of high school, I had my life planned out. Or so I thought.

Today, I’m no longer a varsity athlete or an aspiring doctor. I’m a runner, painter, and pianist in my free time. I’m an avid writer and journalist. I’m a social activist for Filipino people. I’m a cook.

My journey to self-discovery at Oberlin College began with quitting the activity that was tied to my identity longer than any other: swimming.

When I chose Oberlin, I joined the varsity swim team in the fall of my freshman year. I thought my life was falling perfectly into place and everything was going according to plan.

But then practices began. Swim practices demanded 20 hours of hard labor a week, with four of those practices taking place at 6 a.m. This didn’t even include meets, which usually consumed all of my free time on Saturdays. With the workload of readings, papers and exams, exhaustion and stress became ingrained in my state of mind. I forgot what relaxation felt like. But I’d been recruited my senior year in high school, so I was committed to stay.

A part of me wanted to keep exploring, despite the limitations of swimming. I wrote for my school paper, The Oberlin Review, as a news reporter. I became a member of the Filipinx American Student Association (FASA) to connect with fellow Filipino Americans on campus. I joined a dining cooperative called Third World Co-op my second semester. But swimming was consuming me, leaving little room to fully explore and foster these new interests.

I started to consider quitting swimming when I was required to stay on campus to swim during winter break last year. I had to complete a “Winter Term project” — an exploratory six-hour-a-day endeavor that Oberlin requires of all students. But my pledge to swim limited my Winter Term options. I couldn’t travel, get an internship in another part of the world or even leave campus. Swimming trapped me.

I made the difficult decision to quit after my first season ended in mid-February. Over the course of half a year, college had made me realize that I was not swimming for myself anymore. I was swimming for an empty expectation that I had set for myself a long time ago.

When I quit, I felt liberated. I found enlightenment and self-discovery. In dropping this major time commitment, the college life I’d secretly yearned for throughout my first semester blossomed.

I began enjoying activities that I had wanted to do but swimming never allowed time for. I ran. I painted. I played the piano for hours on the weekend to my favorite songs — songs that I hadn’t heard my fingers produce in months, like Chopin’s soft nocturnes or Joe Hisaishi’s scores from Hayao Miyazaki’s movies.

I also wrote for The Review more often. In fostering a love for writing, I realized that I didn’t want to be a doctor — I wanted to be a journalist. I became a co-chair of FASA and a political and social activist for oppressed Filipinos. I trained to become a head cook in my co-op and rekindled my love for cooking as I connected with a community that has given me more support and friendship than I had ever received while swimming.

Quitting something that was so essential to me was incredibly difficult. It was like losing a piece of my identity. But in straying from the path I had mapped for myself, I discovered new places, people and adventures. I let go of an idea that was important to me in the past and stepped into the dark to find new light. This is what college is.

I learned that college is a vital time for self-discovery and transformation. You become vulnerable and you liberate yourself from old pieces of your identity to shape your new present and future.

I realized that you need to be kind to yourself and remind yourself that it is okay to try new things. You never know what those experiences may bring. 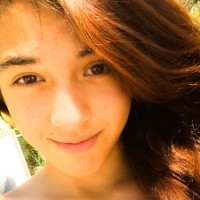 Melissa Harris is an Oberlin College sophomore. She's an athlete, artist, pianist, writer, and proud biracial Filipino-Swedish American. She's a sucker for cute animals, warm cups of tea, and the soft sound of raindrops on windows.

10 Reasons Why Panama City Beach is the #1 Spring Break Destination
Next Post: The Thing About Mental Health