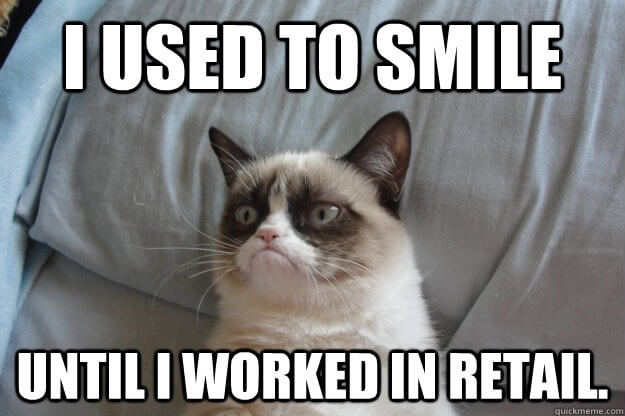 You, my lovely consumer, have met me before. I’m a retail associate. You’ve heard our complaints during major shopping seasons—our customers are thoughtless demons who exist to destroy our well-crafted displays and make us run to the back five times for your purchase. These are fairly normal sins; I can top them.

After working for 2 and a half years at a major lingerie store, I’m mentally prepared for the normal Valentine’s Day customer offenses. Yet there are outliers on the retail spectrum who can make even the most obnoxious shopper feel like Mother Theresa. Trust me when I say, I’ve seen it all. This Valentine’s Day, take some relief in the fact that you aren’t one of these outstanding examples of humanity that I have been fortunate enough to meet:

Once, a guy told me he didn’t know his girlfriend’s size, but he could show me a picture. Maybe the naïve part of me, who deals with men everyday saying, “Uh, I don’t know her size, but she looks like… that girl,” figured he would show me a clothed picture. Pardon me for being so silly. Yes, he showed me a nude selfie that his girlfriend had sent him. Ladies, when your boyfriend says he’ll never ever share your naked pictures with anyone, just know that your friendly neighborhood sales associate shouldn’t count as “anyone.”

This woman picked out all the items that she wanted and then insisted that I go to the backroom and grab everything in her bag from the backroom. I asked her why, if she didn’t want it in a different size, and she said there were too many minorities (she didn’t use the word “minorities,” fyi), and she wasn’t going to wear anything they had touched. I refused, but my faith in humanity that day dropped to a new low.

A man gave me his shopping list and asked me to grab everything for him, wrap it up, and then deliver it to his wife while they were at dinner. At a restaurant. A mile away. I may or may not have laughed in his face.

4. The Mother of the Year

A woman left her baby in the fitting room while she continued to shop in other stores. She didn’t ask for us to watch her. She didn’t ask if it was okay. She parked the stroller at the front of the fitting room and then exited the store. When our manager followed her out, she claimed she hated dragging the stroller around to stores and said she would come back for it in a few hours. Needless to say, security had to intervene.

A man came up to me and started describing the personalities of his wife and five girlfriends and asked if I could show him a lingerie set for each of them. If that wasn’t creepy enough, he told me one of his girlfriends was 18, so he wanted something “reminiscent of childhood but still sexy” for her. No one was really sure if he was telling the truth or just living out some sick fantasy. I’m not comforted by either possibility.

As a customer, you’re probably going to do things that really suck. You’re probably going to annoy the hell out of your associate. Even still, there are things that we learn to forgive, because at the end of the day, there’s a box of chocolates and champagne waiting for us at home, too (whether we’re taken or not!). During this season of love, take a minute to laugh and know that as long as you’re not a contender for this list, you’re just fine. If you’re still self-conscious, settle for a box of chocolates and a gift card, okay?

Previous Post:Hosting the Perfect Anti-Valentine’s Day Party
Next Post:What to Do When Your Paper Is Due…Tomorrow