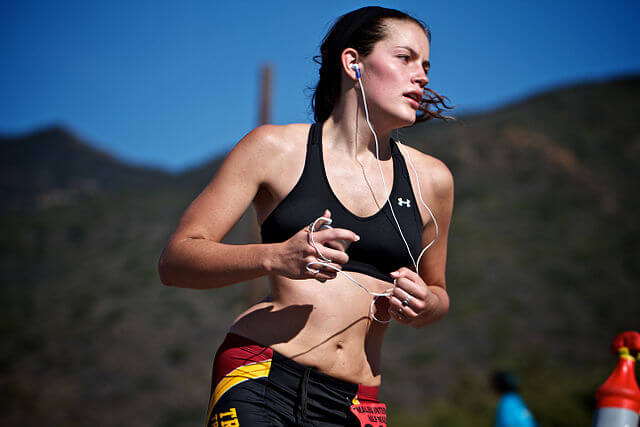 Do You Even Jam, Bro? 15 Songs for the Gym Addict

Rather than hibernating through this upcoming winter with Netflix and holiday snacks, get an early start on that summer beach bod at the gym. Whether you’re becoming a gym addict to lose weight or to bulk up, these intense workout songs will make you feel like Rocky Balboa in a training montage.

“It’s not only that the beat is very hyped up, but also the lyrics are very ‘kick-butt’ and hard-core, especially the line, ‘Won’t you follow me into the jungle.’ I first heard [this song] from watching a University of Florida football hype video, so every time I listen to it, I associate it with the football season so it gets me really hyped up. I would recommend this to anyone who’s working out or just wants to get pumped up.” – Derek Ng, Junior, Psychology, University of Florida

“[This song] talks about how if you want something, you have to go work for it. She explicitly talks about working out and wanting that hot body, so it’s super motivating. Whenever I think of workout songs, I think of songs that have a good tempo and have a good beat for me to keep up with. No matter how many times I listen to it, it’ll never get old.” –Anishaa Patel, Sophomore, Microbiology, University of Florida

“This song makes me feel more intense, and puts me in a mood that makes me more focused. The beat of the song and Donald Glover’s [Childish Gambino] tone sound like he’s ranting really intensely. It makes me feel like I should push myself past my limits.” – Kevin Oula, Sophomore, Finance, University of Florida

“The song just energizes me, and it motivates me to be the best I can be. The beat more than anything sets it apart from the other songs I listen to. People like to listen to fast-paced music when they work out because it helps motivate them and get them up if they’re feeling down. I feel like in the chorus, he’s going all out, more than any other part in the song so that really gets me up.” – Nico Bouchard, Freshman, Accounting, University of Florida

“It’s just a good beat for when I’m running or when I’m driving somewhere or when I’m walking across campus in a hurry. It’s just a song that pumps me up. If you listen to the song, it’s just the same few words over and over, but I just like the sound of the song rather than the meaning of the lyrics.” – Jason Feliciano, Senior, Public Relations, University of Florida

“The heavy bass gives me a good rhythm for me to work out to. It’s an aggressive song so it makes me work harder. I think people like to listen to aggressive songs when they work out because fast-paced music makes you more pumped up.” — Nathan Ma, Freshman, Biology, University of Florida

“’Confident’ has a steady fast-paced beat that keeps me motivated. It’s just a song that keeps me in the zone while working out.” – Kassandra Crompton, Freshman, Computer Engineering, University of Florida

“I go to the gym on occasion, and usually, when I use the elliptical, [this song] motivates me to keep going. I highly recommend the Pop Danthology mixes, especially the most recent 2015 ones because they’re exciting and upbeat, and listening to just one song gets monotonous after a while. The faster the tempo of the music, the more I push myself to keep going. Sometimes, listening to that type of music makes me feel like I’m in a movie and puts me in the mindset that I can accomplish more than I imagined.” – Sabrina Reiss, Freshman, Communication Sciences and Disorders, University of Florida

“I like to listen to this song when I’m working out because it’s really upbeat, and when you’re working out, you want to have some sort of motivation to keep you going, and upbeat songs have really energetic and aggressive tones that adds to that motivation. It’s rap music, so it really pumps me up.” – Brittany Kim, Sophomore, Communication Sciences and Disorders, University of Florida

“I like the beat of the song, that it’s free on SoundCloud and that his voice is nice, soothing, emotional and beautiful.” — Cathy Gloria, Telecommunications, University of Florida

“It’s really catchy and it distracts you from the pain you feel the harder you exercise. I like the line in the song, ‘More than a rush of adrenaline, you will sustain me until the end.’ The entire idea of the line just makes me want to keep going. You can take exercise as a metaphor; the way the song resonates while exercising and how it gives me energy is the same way that it should give me energy in my spiritual life.” – Caleb Chen, Freshman, Biochemistry, University of Florida

“I like fast music when I work out. This song is upbeat and gets you going…It just makes you want to move or dance to it.” – Jackie Sicoli, Freshman, Business, University of Florida

13. “Adventure of a Lifetime” By Coldplay

“I like this song because it has a rhythm that corresponds to the rhythm of running. I like the line, ‘Anything that you want is a dream away,’ because it pushes me to want to achieve my goals and gives me the idea that anything is possible. There’s also a lot of different instruments playing in the background at the same time so it distracts you from being tired and it’s fun to listen to, too.” — Gabby Khawly, Freshman, Materials Engineering, University of Florida

“‘Everywhere We Go’ is my favorite workout song because it’s fast-paced and catchy. It’s not necessarily the lyrics in the song that motivate me; it’s more the beat that I enjoy. I think [workout music] is a matter of mood. Many people like to listen to music that matches the situation, whether it’s fast music when running or a slow song during a yoga session.” — Bennett Gosiker, Junior, Microbiology, Cell Science and Sociology, University of Florida

“This is definitely my favorite song to pump iron to because it’s probably the only song I know that makes me feel like the biggest, baddest man alive. I especially like the line, ‘Like the king finds no peace, his work is never done.’ It reminds me that I can never aim too high when it comes to working out and being fit. There’s always more work to be done.” — David Rojas, Sophomore, Biomedical Engineering, University of Florida

Previous Post:Going Home for the Holidays: We’re Just Here for the Food
Next Post:Modern Feminism: Did You Really Wake up Like That?