Congratulations, fellow college student! You’ve “made it!” You maintained that solid 4.0 in high school, wooed your way into sparkling letters of rec, rocked your ACT’s and got into your dream school.

With eager eyes and a thirst for knowledge, you step into your first lecture and crack open your Macbook. Then, just as you finish checking over your color-coordinated, school-issued planner one last time, you glance up and finally realize you’re surrounded… by people just like you. And while this should be a comfort, a feeling of defeat instead creeps into your chest.

Fear not, my friend, you aren’t alone.

Throughout my K through 12 years, I became all too comfortable with being the “smartest” person in the room. Coming from a fairly small town, I was surrounded by the same people year after year, so an academic hierarchy easily and irrevocably formed. From the smart kids to the smart asses, everyone had their place and knew exactly where it was.

Colleges have a way of attracting people from similar places in the hierarchy. Nine people from my graduating class ended up going on to attend the same school as me, and it’s probably no surprise that they were the same people who joined me at honors banquets and AP exams. At Michigan, I found myself amongst nothing but a jumble of similar groups from other high schools. I went from decorating myself with gold stars and constantly being reassured about how “special” I was to being… gulp… average.

Here’s the kicker: I didn’t change. My surroundings did.

Let’s be real–we’re creatures of comparison. We wouldn’t really know hot without cold, or fast without slow, and we feel a hell of a lot smarter when we’re sitting by someone with no clue what they’re talking about. Entering college means a higher volume of competition and more similar batting averages. My high school had one valedictorian; college is full of them.

For a while, I couldn’t deal. My accomplishments paled in comparison to those of my peers and I kept quiet in discussions for fear of saying something my bright classmates would think was stupid. I entered writing competitions and got no awards, applied for internships and never heard back. I didn’t receive roles I wanted in my theater group and didn’t march as well as the more seasoned members of the marching band. Everywhere I went I was met with the same feelings of insecurity and inadequacy.

Countless tear-stained phone convos with my mom and friends from back home pointed me toward a truth that didn’t sink in until just recently: There’s always, always going to be someone “better” than me, but that doesn’t mean I’m not great.

I still haven’t won any scholarships for my short stories and poems, but I can look back on my portfolio and see how much I’ve sharpened my craft in the last three years.  Mysterious strangers landed my dream internships in NYC, but now I’m spending my summer relaxing, taking care of my kitten and training to be a barista (which I think is pretty damn cool). While it’s much easier said than done, focusing on my own growth rather than on that of those around me makes me much happier and more fulfilled. 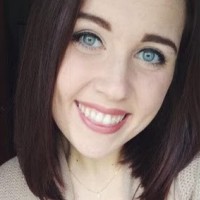