You are here: Home / College Majors / Gender Studies / Being Lied to Helped Me Choose My Major

I’ve always enjoyed reading classic literature. In fourth grade, I loved mythology and the Percy Jackson series (yes, one of ~those~ kids). In eighth grade we read Harper Lee’s To Kill a Mockingbird. That book altered the way I saw the world because, in some ways, I saw myself as Scout—always ready for a fight but moved by the idea that all people have goodness in their hearts. In ninth grade, I tried to read Jane Eyre and Wuthering Heights but failed miserably and never looked back. In tenth grade, we read Fitzgerald’s The Great Gatsby. Outside of class I moved through his This Side of Paradise and Tender Is the Night, and I began to fall in love with the literary period of the early twentieth century.

In eleventh grade, we read Hemingway’s The Sun Also Rises, which to this day remains my favorite book.

This summer, I picked up Z by Therese Anne Fowler, and I noticed that F. Scott Fitzgerald did  not live the life we thought he lived. As I delved deeper into the history of his marriage to Zelda, I became livid. When we’d read Gatsby in school we had discussed Fitzgerald’s tumultuous relationship with Zelda, but we completely overlooked his plagiarism of her private journals, which eventually served as the basis for Fitzgerald’s The Beautiful and Damned, not to mention that he effectively gaslit her into a psychiatric commitment. With Hemingway, we ignored the fact that his wife Hadley Richardson had introduced him to all of the literary icons of the time, including James Joyce and Sherwood Anderson, and he repaid her by having an affair with Pauline Pfeiffer, which served as a plotline in his 1926 novel.

After learning all of this and researching the true people behind the writing, I saw neither Fitzgerald nor Hemingway could become famous on their own.

Powerful women raised up both of these men, and those men later disregarded those women completely. I felt lied to and betrayed, and I didn’t want it to happen again (I realize now that the responsibility for this does not lie with my teachers, but more accurately with their superiors and those who set the curricula). I wanted to make a change.

This doesn’t just happen in literature. It happened in science with Rosalind Franklin and the discovery of the structure of DNA, and it happens still in history classes with the glorification of western imperialism and colonialism. As a western culture we like to talk about women, people of color and other minorities just for the sake of talking about them. No one gives them any credit beyond what they think will get them “brownie points” in return.

We don’t validate minorities because it’s simply the right thing to do; we do it because we think it will win us favor.

I chose my major to stop that. I’m a (technically undeclared) English and gender, sexuality and women’s studies major. Originally, I wanted to make a difference in public policy or government, but those classes didn’t quite work out for me. I realized that I found incredible passion within myself in studying literature and queer history. We often don’t tell the stories of women, LGBTQ+ folks and people of color in the ways we should, and I want to help change that.

I encourage you to find a major or area of study when you’re ready for it. If you want a life with passion in it, chase that passion. Seek out a path that keeps you up at night and brings you down a rabbit hole of Wikipedia pages. There’s a quote hanging in my bedroom from Liv Arnesen, one of the first women to trek across America, that continues to inspire me: “When you feel your heart beating hard or your blood running fast, you have found something that is important to you. Create room for it.”

Stories all around us need telling. We should tell them completely. 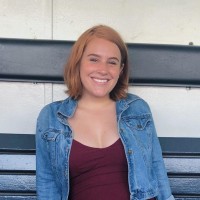