You are here: Home / Life / Battling Poland Syndrome: How I Learned to Love My Flaws

When I entered high school, I moved to an entirely different city. This meant leaving my friends behind and treading a new territory all on my own. Unfortunately, I felt the need to keep to myself for a long time because I felt different. In middle school, I learned that I had a rare disorder called Poland’s Syndrome— a physical disorder characterized by missing or underdeveloped muscles on one side of the afflicted individual’s body. This results in abnormalities that can affect the chest, shoulder, arm or hand. For me, it affected my chest.

In the span of three years, I often found myself going to several doctor appointments after school. I was poked, prodded and photographed. It made me constantly feel like a freak because no one else I knew needed medical intervention through puberty. At 15, I began a long process of surgeries to correct the issue like most people with Poland’s Syndrome do. This involved wearing a tool over my chest every night to stretch my skin for a month. I would then go through surgical procedures to correct my breasts that had long and painful recovery times. Those served as some difficult months.

After each surgery, I almost always endured more pain and heartbreak because the results did not quite match what I expected.

I had to deal with my own form of body dysmorphia, feeling like my whole body was just wrong. I felt even more like a monster after seeing the scars and bruises that remained, and I constantly compared myself to other girls, who in my mind, all lived perfectly normal lives. It felt hard for me to let people in because I held so much anger towards the world. “Why me?” I’d always ask. Why couldn’t I be normal? Why did I have to go through this?

During lunch time, I would usually sit by myself. I hated that I didn’t have any friends, but in a way that’s the way I wanted it. I felt like no one around me could really understand me, and I didn’t want anyone to see the bandages peeking through my shirt. So, during this lonely time, I poured myself into reading and writing. It served as my own form of escapism, of getting to become someone else, somewhere else, where everything seemed better. I experimented with all kinds of writing and filled up journals upon journals.

At the end of my sophomore year, however, I reached a low point. I still lacked a solid group of friends, and the days began to feel really monotonous and lonely. I dreaded school and wanted things to get better for me so badly, but I still held so much fear about letting people in because of the way I viewed myself. During this time, I took creative writing classes as a way to fuel my inspiration in order to escape even further away from reality. My teacher, Ms. Seigel, became such a positive influence on my life. I felt like she could truly see me, and she encouraged me to get out of my comfort zone.

Because of Ms. Seigel, I entered many writing competitions, and I even won two awards. Granted, they were second-place awards, but I was still happy to share my talent. She asked me to join the literary club, and there, I learned about the editing world. At the end of every year, we would put together a magazine full of writing and art made by the students. We also hosted an annual “Coffee House” event where we’d decorate the library and students performed slam poetry and music.

I felt alive in this world: it felt like one of the only places I truly belonged.

As my surgical journey approached an end my junior year, I finally decided to make an attempt at making friends. It would take many years until I accepted myself, scars and all, but at least I became free of the bandages and pains and started to feel some sense of normalcy again. Along came Nicole, a super outgoing, friendly girl I met in my art class–we became friends quickly. We went on a school field trip together to see colleges all over Florida, and on that trip, I met another one of her friends named Sol. When we got back, they introduced me to their friend Jovanni and suddenly I had more friends than I ever thought seemed possible. It surprised me how easy it was to befriend them.

Since I spent so much time on my own, I felt like making friends would be much harder.

I remember when I first let them in about my affliction. One of them noticed a very large scar on my chest and asked me about it. Without a doubt in my mind, I knew they would accept me and it helped me take that first step in accepting it myself. Through their support, I started to think about myself differently, and I discovered that I didn’t need to hide anymore.

The doctors told me that as the years went on, my scars would fade, and I think that’s true about emotional scars as well. One day, you’ll look in the mirror and recognize that you are imperfect and decide to love yourself anyway. I never thought I’d look at my scars, all pink and fleshy and in the way, and see them as beautiful, but now I do. Now, I don’t feel the need to hide myself because I know that I’m both totally normal and different in the best ways.

I also think it’s important to find an outlet of some kind. Like Frida Khalo, bandaged up and in pain on her bed for two years, I poured myself into writing, and I owe a lot of my life to that. Through my characters I discovered who I wanted to become and as I learned to love myself, I watched that image change to fit me more closely. I don’t regret my experiences anymore because I realized that I learned so much from them.

The reason I choose to tell my story is for anyone who feels badly about their flaws, to let them know that it does get better. If you choose to look at the situation differently you’ll see that those imperfections are what make you unique but they also don’t define you. You’re much more than what you go through. 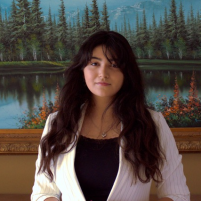 The Ultimate Guide to Summer Internships [Take Action with 4 Steps that Make it Easy]
Next Post: Being Asian American: The Model Minority Myth and Anti-Blackness