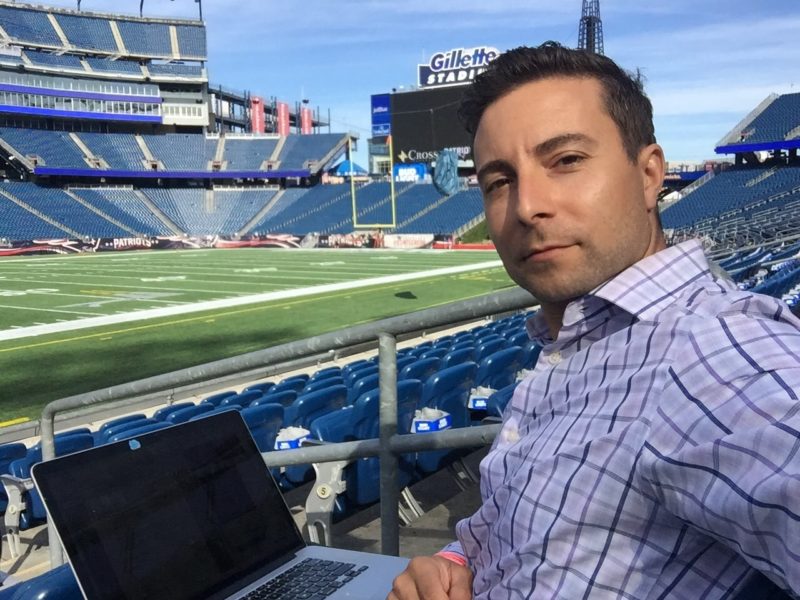 Around the World in 365 Days: College Mag Interviews Brook Silva-Braga

It started when HBO sent him to film a profile piece on Manny Pacquiao, the boxer from the Philippines. Brook Silva-Braga had never been to Asia, so he thought it would be a nice idea to plan a trip to Thailand. Soon though, a five-day trip turned into a two-week excursion when he met two guys from Belfast who were doing an around-the-world trip. An around-the-world trip? He’d never heard of anything like it. ‘Why not?’ His conscience probed. He had the means to do it. No wife, no house, no mortgage. Why not?

That was Brook Silva-Braga at 24, not far removed from college and wondering about the pathway of his life. Silva-Braga had graduated from New York University with a degree in journalism; he had been working for HBO since age 19, first as an intern, and then as a full-time employee in their sports department. Prior to his assignment in the Philippines, Silva-Braga had only been to a few other countries, but never for as long as two weeks – and certainly never for an entire year.

So in 2005, leaving both a job and a home, Silva-Braga embarked on an around-the-world trek, traveling to 26 countries and four continents, staying in cheap hostels and tagging along with fellow travelers, and filming the entire time. The product became the award-winning documentary film, A Map for Saturday, which was eventually aired on MTV. Since returning home, Silva-Braga has since left his job at HBO to pursue documentary filmmaking. It seems to be working out. Not bad for someone who traveled around the world with only four pairs of underwear.

Find out what Brook Silva-Braga had to say about his once-in-a-lifetime trip.

College Magazine: Were you nervous to be quitting your job at HBO? At the time, did you have regrets about what you were leaving behind?

Brook Silva-Braga: There were different reactions at HBO. My bosses were a little disappointed. My colleagues of a similar age seemed to be jealous, but had this feeling that they couldn’t do it. I think people were also confused by someone who had been on this corporate track seemed to be throwing that away. A mixture of jealousy and confusion. But I was excited just by the challenge of it.

CM: Was it your intention to make a documentary? Or was that an afterthought?

BSB: At first I wanted to travel, and the only reason I could think not to do it was it was a form of professional suicide for me. I rationalized it in my own head by bringing along a camera and making a documentary along the way. It was an important step in making it seem like a good decision to go. A lot of people have said that when you’re away for a long time, you need to do something. You feel kind of useless out there. It gave me something to be productive with. I had almost everything you’d need to make a film or a documentary, but everything was smaller. So I had a tripod, but it was 2 pounds. Hard drives, laptop, mics, tripod, camera.  All in all, 30 pounds, which was a lot, but less than you’d normally have.

CM: A Map for Saturday: How did you pick the locations you visited? Or did you just ‘go with the flow’?

BSB: I had the main five or six stops pathed out. So I was on a round-the-world ticket. So I knew I would land in Sydney, Australia, on January 8 and leave on March 15, but I didn’t know what I would do those two months. I almost never knew where I’d be sleeping two nights in a row. One thing you realize when you’re traveling is the destinations matter less than the people.

If you meet someone cool and they’re going south, but you want to go north, chances are you’re going south. You read in guidebooks what’s cool, you hear from travelers what’s cool. As a traveler I became more and more fascinated by why we want to go to the places we wanted to go.

Brook’s round-the-world ticket took him first to Sydney from New York, then to Bangkok (Thailand), then to Delhi (India), then Athens (Greece), Stockholm (Sweden), Rio de Janeiro (Brazil), and then back to the U.S. from Buenos Aires, Argentina.

CM: And how did you pick the people to interview? Were they just random people, or people you had become friends with along the way?

BSB: Usually it would just be people I’d be traveling with. And the time traveling with them would be the world’s greatest pre-interview. And then there were other times—there was this 73-year-old Californian guy that I stumbled upon in Belgium. When I met him he was like, the grandfather backpack guy. I thought, ‘I gotta talk to him.’ Usually it was people I was hanging out with.

CM: What was it like to finally return home?

BSB: Coming home’s the hardest part. The way I rationalized it was I was going home, I wasn’t staying home. I thought of it as temporary, which made it easier I think. That was definitely the hardest part of the trip I’d say. It’s more like leaving your home. This environment of moving around and leaving places becomes normal to you, becomes a type of home. It was a lot of the same emotions leaving to go away. Leaving something familiar and relatively enjoyable, I thought, ‘What would come next?’

CM: One Day in Africa was the next documentary—did you have your job waiting for you back at HBO? I’m guessing the urge to travel Africa was stronger, especially since you hadn’t visited it during your around-the-world trip.

BSB: It was 2008 when I went to Africa. HBO did offer me my job back, but the idea of being in an office 50 weeks a year was deeply unappealing. I launched a video website, which was how I spent 2007. In 2008 I had the chance to go to Africa for half a year. So I took that opportunity. It was a different trip in a lot of ways, but a good one for me because the challenges of Africa were different for me.

CM: Where in Africa did you travel?

BSB: I went to 13 countries, all over. I came in on a ferry from Spain into Morocco and drove down through Morocco into Mauritania, into Senegal and Mali and Burkina Faso. [I] saw a lot of West Africa, which is much less developed than the better parts of Eastern and Southern Africa. And then I flew over to Eastern Africa and spent some time in Kenya, Uganda and Tanzania. I spent about a month in Malawi—I was trying to film a woman on the day she gave birth. At the end of the trip, I flew out from Johannesburg.

CM: Going to Africa after already making one documentary on travel, did you approach the trip or the filming process differently? What was the goal for One Day in Africa?

BSB: My goal with the documentary was to provide a channel between folks there and folks here that was as unfiltered by me as possible so that I shouldn’t be the one telling you what the message is. My main complaint about the media that comes out of Africa is it’s always used to serve some agenda—used to gin up money for an aid group or focus on some problem. My time there was to say although those things exist, for the vast majority of people, those aren’t the central elements of life.

I hoped to present the more common stories of people who lead often difficult and complicated lives, but not the stories we generally see in the West.

CM: For college students, how can world travel be a key part of their experiences maturing and growing during their college years?

BSB: Experiencing different cultures and different places gives you a better understanding of what is out there, and it gives you a better perspective of your own home and your own community. You can see how it’s different and how it’s often the same. I think my travels have given me both a whole lot of appreciation for being an American and also an appreciation of what other places have to offer, be it a type of food, or a type of climate, or a type of social structure.

CM: Any highlights from your around-the-world trip in ’05?

BSB: I always say the three countries with the best beaches are Thailand, Australia and Brazil. Ao Nang, Thailand. It’s this little place in Thailand. There’s a beach near there that you have to take a long tail boat out to. I spent my 26th birthday on that beach. And music—Mali in West Africa has a great music scene. Unlike most developing countries, there’s actually a way for artists to make a living by playing music. You see it in a bunch of different venues.

CM: And finally, you’re going backpacking around the world again, and you have room for only 10 items. What are the 10 essential items you’d advise someone to bring?

BSB: Passport and bank card are the only true essentials, but here’s my list of 10 helpful items I always take on a big trip:

For more on Brook’s around-the-world adventures, check out A Map for Saturday.

Previous Post:Larry Klein of the AMAs
Next Post:Review of Youth in Revolt