You are here: Home / Campus life / 10 Things That Are So University of Washington It Hurts

Huskies love everything about the University of Washington. Every spring brings a beautiful Instagram-worthy photo of the cherry blossoms. Just beyond the fountain lie a breath-taking view of Mount Rainier. Oh, and let’s not forget to mention the infamous Harry Potter Room. These, needless to say, are the things you get to know on campus visits.

Keep reading for 10 things that only UW Huskies understand.

If you want to talk UW, then you can’t forget the motto. If you don’t remind yourself of the obligation to ignore all bounds as you exit your 8:30 a.m., then you aren’t UW enough. What does the phrase mean? Well, that’s open for interpretation. “It explains itself,” junior Krista Slaney said.

I’m taking this point about UW students personally, despite the fact that junior Vanely Ruiz said it was all too common among UW students. Like Ruiz, I too switched majors to English Language and Literature. I found it to be quite hilarious when, several months ago, the English department advisor essentially told me changing majors was rather frequent. Considering how a lot of us enter UW thinking we would major in something STEM related, it makes sense that the cutthroat mentality here quickly changes a few minds.

On the UW campus, we have what we call back up majors. These tend to happen when your major of choice is competitive, and so you select a second that is easier to get into in the event that you don’t get into the first. Yes, these are rather common and, yes, students do bond over this fact. While advisors never tell you having a backup is a good idea, that doesn’t stop us students from discussing what we plan to do should we get rejected from our first choice.

Junior Gray Garrido decided to address the elephant in the room: some students don’t get into their first or second major. “Switching schools because you couldn’t get into either,” she mostly joked when asked, “What is something that is so UW it hurts?” There is truth behind her humor, however, seeing as there are a few science majors who are extremely dedicated to our first choice. It isn’t unheard of to switch schools in pursuit of your major because of the competitive application process for UW majors. Other students try to find the next best thing before junior year rolls around.

“Trying to find a place to study,” Ruiz pointed out, is a very UW struggle. Finding a place to study on campus takes the intense planning, persistence and instinct of a nature survivalist. With extreme competitive nature, and even more competitive majors, everyone spends their free time hitting the books. The campus favorites tend to be Odegaard Undergraduate Library (think “all-nighters”), Suzzallo (known for its Harry Potter room) and the Law Library (think scary movie silence). Through the online reserve system, you can lock in a study space at any of these locations. But this won’t help at all if you don’t schedule out your study time two days in advance, especially during dead week. If you don’t, your only guaranteed study space is right at home at your kitchen table.

If there is one thing I’m not going to miss about my STEM major (aside from everything), it’s the grading system. Junior Kenneth Wong openly dislikes the grading scale. “The grading system for STEM classes is not fair,” he said. UW, like many other schools, operates on a curve that turns even the best of friends into the worst enemies. Everyone aims to score above average which, in introductory chemistry courses, can end up being around 60 percent. If anyone scores unusually high, they have an entire angry class to confront. Not really, but those STEM majors really do take that curve system seriously.

Anyone who’s really wanted to get into a class has to battle registration season. Each quarter you are given a specific date to register, but if you don’t wake up in time to press that registration button at 6 a.m. exactly, then better luck next quarter. Not really, but I have yet to have seat availability notifications alleviate all of my problems.

It’s been a while since I’ve had to battle this technology, but Poll Everywhere is every UW professor’s dream. What better way to take attendance in a lecture hall of 400 or more students? Essentially, the professor will ask questions during lecture and the student will log in via mobile device or laptop and send in their answers. Points are rewarded to anyone who answers. If you’re smart, you’ll do as Slaney does: “Doing poll everywhere and you’re everywhere BUT class.”

UW students love water just as much as they love their water filters. UW students especially love Hydroflasks for their uncanny ability to keep liquids at a certain temperature for long periods of time. “Everyone and their frat bros have Hydroflasks,” junior Kan Paprakon said. “This ice is from three years ago, man!” We had a good laugh with that one.

Clearly UW students take their academics seriously (as seven out of 10 are related to academics). But nothing sums this up more than the infamous video in which a UW student shuts down a protest with three words: this is library. 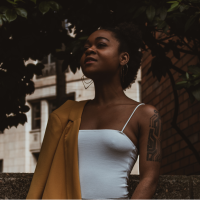 BreAnna Girdy is a junior at the University of Washington studying English and Digital Arts/Experimental Media. Her hobbies include reading, writing, photography, and pretending she is a professional movie critic.

21 Things to Do in Chicago When You’re Under 21
Next Post: 10 Cool T-Shirts For Her to Feel Comfortable and Confident