We all know college basically means you have no one telling you how to think, how to act or even how to dress. The freedom feels extremely liberating. But if you’re anything like me, the latter was the most difficult to get used to. No one telling me a dress code? As nonchalant as that sounds, that actually stressed me out.

Starting in the fourth grade, I attended private, religiously affiliated schools. To be more specific, I went to an all-girls, private, Catholic high school in the south. This is everything and nothing that you think it to be. Of course, you can picture some things about going to an all girls school, but we did not play into the Britany Spears stereotype of the school girl—or at least we weren’t allowed to due to our strict dress code. Our plaid skirts needed to be no more than a credit card height above the knee. Your shirt must stay properly tucked in at all times. Socks must not have any logo and your saddle oxford shoes needed to remain in pristine condition.

Don’t get me wrong—having a dress code actually felt nice. The plaid skirt and saddle shoes provided a sense of security and certainly a sense of ease while getting ready in the morning. You knew what you were going to wear every day and no one could tell if you wore the same shirt multiple days in a row without washing it. Classmates questioned where you were going after school if you wore makeup, and I became more confident not wearing it than I was with it.

More often than not, I wouldn’t even brush my hair and would get dressed after morning practice while driving to school. I really only dressed up on the weekends when going out with friends or for nice dinners with family, making it more of a special occasion. After all, I didn’t need to otherwise. The dress code truly made me more confident in myself. I could focus in class, not worrying about my outfit choice or running into a wardrobe malfunction. This did not fail me until I got to college.

After nine years of strict dress codes, I expected the same when I went to college but in fact got the opposite. I guess this is common sense but it took me by surprise. After so many years, one would think it would be nice to wear whatever I want to school but I was not used to picking out my own clothes. What was I even supposed to wear? What looked normal? Would I get in trouble for wearing a tank top or shorts when it was extremely hot outside? Would my professors say anything? The last time I was able to dress myself for school on a daily basis, my mom picked out my clothes.

There is no guidebook or person telling you how to dress. It just took hours of thinking through every piece of clothing I owned and debating what would look best. I had to look good but also be functional, right? I must have tried on close to 20 outfits before I gave up and settled on the first I’d tried.

During my first week of classes freshman year, I worried about these things. My first day of classes I wore denim shorts, something literally unheard of in high school—I felt nervous walking to class and uncomfortable for the first few minutes. After all, I was trained to be overly cautious of how I dressed for class. I had never been to class in shorts.

Though you may not think this is a big deal, it was practically groundbreaking to me at the time. In high school, when we were given the privilege to “dress down”, or just not wear the uniform, we could not even wear leggings until the end of my senior year because they were too tight. Shorts and tank tops? Forget it. But I saw that everyone in the class had dressed just like I was. Not to mention, I sat next to someone who bragged about wearing the same shirt she had partied in the night before. I quickly began to realize that no one cared.

The answer to all my ridiculous questions was of course no one cared. You’re in college to learn. The professors just want you to be attentive and participate. They are not there to restrict you with dress codes but instead to teach you. Unless you look like someone at Comic Con or you’re wearing a bikini, literally nobody cares what you wear. I simply do the best I can to make sure I’m comfortable. This means not wearing jeans when it is extremely hot outside and being able to wear leggings when it’s cold. Though there was a learning curve, the freedom actually made me more confident in who I am. The dress code in high school got me so far, but it took me breaking out of that shell to feel comfortable in my own skin.

Stressed AF about what to wear to class? We’ve got your back. 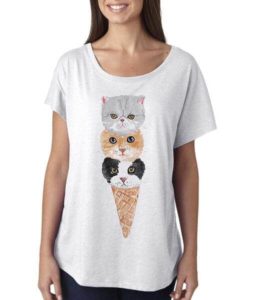 Treat Yo Self Tank Top