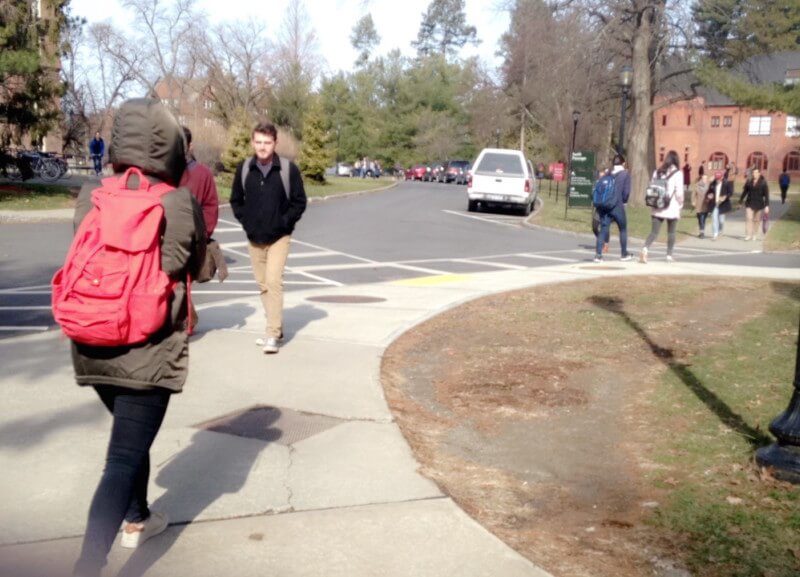 Maria BellMar 2, 201752
Home » Latest Posts » What Happens if You Say Hello to Everyone for a Week?
FacebookTweet

If someone you didn’t know said “hello” to you as you walked by on your way to class, what would you think of them? Would you say hello back? Would you respond at all? For a week, I was that oddball.

Find out what happened the week that I decided to say hello to strangers on Vassar’s campus.

When I resolved to go a week greeting each person I passed during my day-to-day routine, I really didn’t think it would be that hard. I’m not an exuberantly outgoing person, but I consider myself friendly. I felt like I smiled at people a fair amount already. Even more than that, it’s not like I’m in a giant city. I spend most of my day on a small liberal arts college campus where I’ve seen most of the faces I’m passing at least a few times before. So saying hi should feel perfectly easy, right?

I got off to a promising start on my run Monday morning. I run on the Vassar Farm, a preserve open to the public. Eight out of the 11 people I encountered (mostly elderly dog walkers) smiled and nodded at my greeting. It felt perfectly natural to acknowledge each other. Honestly, I felt pretty good about myself every time my greeting drew a smile.

A possible explanation for that good feeling came from Robert McAulay, a sociology professor at Vassar College. Drawing from Arlie Russell Hochschild’s book, The Managed Heart: Commercialization of Human Feeling, McAulay described our emotions as part of an exchange relationship. If someone gives you a birthday card, you’re more likely to give them a card on their birthday. The same thing goes for greetings. When you greet someone, that can be seen as a gift from you to them. And often they will then give the gift of a smile or hello in return. Looking at it that way, I netted eight gifts on my run that morning. Not too shabby.

However, McAulay pointed out, it isn’t always that simple. The people I acknowledged first hadn’t asked me to give them anything. But once I did, they suddenly felt an obligation to return the greeting in order to keep the exchange equal. Even though I didn’t force them to reply, they still felt a need to do so. Think of it like receiving an unexpected Christmas present from that one kind-of-maybe friend and feeling like you need to find something to give them in return. While the older townspeople didn’t seem to mind a college student waving at them on her run, in some situations, it could definitely be interpreted as an intrusion.

When I got back on campus and continued my experiment, I did feel like an intruder. I never realized how much students on my campus don’t acknowledge each other until I put in an active effort to do so. It startled me because I don’t think of my campus as an unfriendly place. But I realized this didn’t have to do with friendliness. No one actively tries to ignore everyone else. Saying hi is just not the norm.

It took a serious amount of effort for me to smile or say hello as I passed people. Why? They clearly did not expect any kind of acknowledgment. More than that, they often didn’t actually notice I’d tried to greet them at all, due usually to the fact that they kept their eyes on the ground or wore headphones.

A couple times my greeting brought me to people’s attention who probably wouldn’t have registered me walking past them at all otherwise. I got a few smiles returned when they noticed me, but I received far more blank faces or vaguely confused expressions. I figured the ratio of answered to unanswered acknowledgment equaled about one in 12. What I noticed raised two key questions for me—first, why are students on campus so unlikely to greet each other? Second, why did I feel so uncomfortable attempting it?

I don’t think it’s possible to come to one concrete conclusion on the first question. But McAulay did observe that often to some extent, you simply don’t want to say hello because you don’t want to complicate your life. The situation really is everything. On campus, we’re surrounded by people all the time, heading first to one class, then another. We have enough on our plates without dealing with exchange relationships.

On the other hand, the people I passed during my run were in a quieter, less-stimulated environment where it’s a lot easier to engage in an emotional exchange. McAulay also pointed out that greeting someone is an implicit way of saying that you both are part of an “us.” You may not have seen them before, but you now acknowledge them as part of your community, however loosely defined.

I think that on a college campus, we don’t feel the need to affirm each other as part of our community by saying hello to each person we pass. By nature of being students at the same school, we’re an us already, whether we greet each other or not.

As to my discomfort giving unexpected greetings, McAuley made the point that when we encounter someone, we automatically try to place their behavior in a certain motivation. When I say hello unexpectedly, by nature the person will try and figure out why by making inferences. Maybe I’m overly friendly or weird, or I mistook them for someone else.

Perhaps we often don’t greet people because we don’t want to give them a reason to draw an incorrect conclusion. Putting myself out there that way required me not to care what judgments people made about me. And well, I learned I care a lot more than I thought.

But I also realized greeting someone isn’t just about making an impression on someone else. We also send a signal to ourselves. The way we respond emotionally to their response tells us where we stand with them. Saying hello to everyone you pass doesn’t feel so fun when you only receive blank stares. Rationally, I know it wasn’t personal and tried not to take offense. But emotionally, that unequal exchange feels like rejection— like writing “happy birthday” on someone’s Facebook wall and them not doing the same on your birthday.

On the last day of my experiment, I overtook a boy standing on the path facing away from me. Typically, I’d walk right on by, possibly without him even noticing me. I almost did. But at the last second before I passed completely by, I called out a quick “hello!” He turned, startled. But when he saw my smile, his face lit up and he grinned at me.

As I walked away, I felt a silly rush of satisfaction. While I’m relieved to return to a normal level of social exchange, there is…something about a simple hello.

Previous Post:CM’s Guide to Vanderbilt University
Next Post:Top 10 Colleges with the Hottest Guys