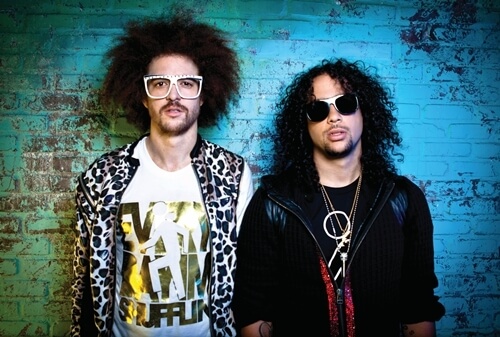 Ashley GrohoskiMay 18, 2012
Home » Latest Posts » Not Sorry for Party Rockin’: Meet LMFAO
FacebookTweet
You’ve been party rockin’ all semester. Now you’ll be party rockin’ all summer. For Sky Blue and Redfoo of LMFAO, it’s all about making the music that will be blasting on your party playlist from Homecoming to graduation. “We don’t even call it music—we call it tools for the party,” Sky Blue says.

It All Started in Miami

For party rocking duo Sky Blue and Redfoo, it all began at the 2007 Winter Music Conference in Miami, where the band first witnessed the “global party” scene. Now every time someone even mentions Miami, they get goose bumps.
“That’s where it really got started for us,” lyrical artist Sky Blue says. “Every place we go we can find a great memory. It’s the party animals that are everywhere in the world that will come out and get crazy.”

The band, known for their adrenaline-rush inducing, colorful performances, uses inflatable palm trees, shuffling zebras and other bizarre effects to create a dream-like state-of-mind for concert goers.
“With LMFAO, the concept and attitude is really representing a world,” Sky Blue says, “It’s this whole world vibe with no rules really. The only rule is that there are no rules.”
LMFAO’s current focus is preparing to give the fans what they expect and more during the summer tour, Sorry for Party Rockin’. Their music is an evolution heavily influenced by who they meet. “It has a lot to do with the people you’ve hung out with, and just through the kind of conversation that stimulates a new sound or new concept,” Redfoo explains, “and then we take it and do it our way. You gather a bunch of different experiences you’ve had once you’re around those people.”

In the last few months, LMFAO has dealt with rumors that the duo was breaking up. “It was the first time we encountered that sort of stuff,” Redfoo says. “…and it’s completely false—blood is stronger than anything.”
The two talents of LMFAO grew up in a musical family with their “Papa Berry” constantly reminding them about the cycle of success. “When you get famous you become the target of rumors,” Sky Blue recalls his dad saying, “and there are people with lawsuits going out to take advantage of fame and tabloids starting controversy.”

Performing with Madonna at the Super Bowl is a testament to their ability to get even the largest audience rockin’. “The experience of being in front of everyone at the stadium has inspired us,” says Sky Blue.
“For us, we perform the same way in front of two people as we do 20,000 people, using the same energy, effort and vibe,” Sky Blue says.
For their upcoming summer tour, the duo says that they’ll continue to create custom acts with other performers in mind.

Find schools
“At one point you’ll see all of the artists with us on the stage,” Redfoo hints. “It could be a special guest in and out. Lil’ Jon might come [here and there] if his schedule permits. We’re definitely open to the suggestion of artists wanting to perform with us. We are always open with invites.”

Since they first broke out onto the music scene, LMFAO’s mantra has been to “create, make and sell,” Sky Blue says.
“It’s really important to know what phase you are in,” Sky Blue says. “First you are creating and writing songs. Once you get them, you manufacture them, distribute, and sell them. Then you have to collect. And after that, you have to pay your taxes,” Sky blue laughs. “It’s also important to organize before you advertise, and before you promote, know what it is—know what you have made before you sell it,” he adds.
Aware that their music is often thought of as funny and satirical, LMFAO says that it’s not always intentional.
“There is nothing [deliberately] humorous about our packages,” Redfoo explains. “The songs are meant to be serious, but humor in our music really stems from being class clowns—not like being clowns, but coming up with the clever joke that everyone can relate to. That’s what makes it funny, that it’s true.”
FacebookTweet
Life