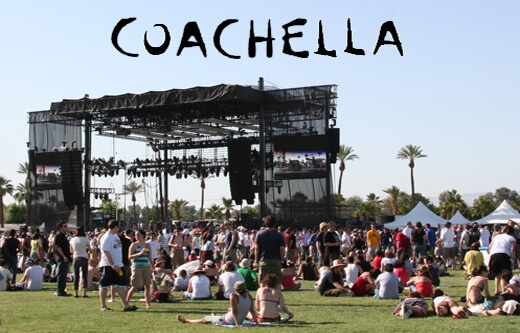 Renee KlahrApr 4, 2012
Home » Latest Posts » Coachella Fest: Playlist
FacebookTweet
Deep in the heart of the California Desert lies Coachella Valley, a grassy oasis where the largest American music festival is held every year. For over a decade, the aptly named Coachella Valley Music and Arts Festival has brought together the best in cross genre music and the arts. Spread across two weekends in April, attendees are privy to an outdoor bevy of constant performances by their favorite artists.
While each year’s lineup seems more extravagant than the last, Coachella’s best asset is its ability to offer diverse music while representing what’s popular. The sounds of this year’s festival, which will be held from April 13 to 15, could not have been more incongruent: the acts will vary from Avicii to Bon Iver to Snoop Dogg to Radiohead.

As such, CM has compiled a short list of songs to prepare–and excite–you for 2012’s much-hyped Coachella fest. Enjoy!

The English indie rock band is no stranger to the Coachella lineup, as the band’s incandescently witty songs cater well to this festival’s crowd. “Fluorescent Adolescent”, like most of their work, is the perfect example of the band’s use of rhythm and sound while showcasing their attention to detailed lyrics.

Most people assume that electronic dance music has little place outside a nightclub. DJ Kaskade proves the illegitimacy of this assumption with an eclectic sound that provides cross genre appeal. “Room For Happiness”, which comes in both the upbeat “Fire” as well as the mellow “Ice” versions, features catchy beats and layered harmonies that are sure to captivate even the most begrudging of audiences.

The name Childish Gambino alone is sure to draw a heavy crowd, but his addition to the Coachella lineup marks a grand shift for the primarily “underground” festival. Fans will be excited for “Freaks and Geeks”, but “Heartbeat” falls squarely in the electronic category with obvious influences from Justice.

The Swedish progressive house DJ will bring a tantalizingly fun aspect to the show. Known for his synth-sound, Alesso is a sharp contrast to the more conventional acts at Coachella. “Pressure” is the breakout club-anthem of the last year, thanks to the wonderful vocals spliced between heart pounding beats that will keep you dancing long after it ends.

If you are looking for a repetitive, mesmerizing track to up the energy at Coachella, look no further than Ingrosso’s hit single, “Calling.” With multiple versions outfitted with a variety of effects and vocal mixes, this fist-pumper showcases exactly what this powerhouse DJ can do.

Leave it to a 19-year-old breakout DJ to create one of the most sought-after tracks of the year. After top artists like Knife Party remixed the house hit “Unison,” it has been played in some form at almost every EDM venue thus far. Now, Coachella will get a sampling of the artist that some have claimed rivals Avicii in mass-market appeal, and you can bet that “Unison” will make an appearance as well.

If you're an electronic music fan and want more than your typical house/trance sound, meet Flux Pavillion. This dubstep artist has been making waves in the EDM community, remixing everything from indie to techno tunes. “Gold Dust” showcases the best qualities of a quintessential dubstep piece, along with Flux Pavillion’s alternate take on a bass-centric hit. Dubstep fans will be drawn to his powerful set list immediately, but even indie-rock fans can enjoy the raw energy that emanates from this electro style.

8. Gold On The Ceiling – The Black Keys

Despite being an obvious pick for the festival’s demographic, The Black Keys are still one of the most exciting, highly anticipated acts to be on the lineup. Between “Brothers” and their latest album “El Camino,” fans can expect to hear all their favorite songs.  Fresh offthe indie rock band’s latest effort, “Gold On the Ceiling” is one such track–it perfectly exemplifies why this beloved band continues to dazzle.
FacebookTweet
Life