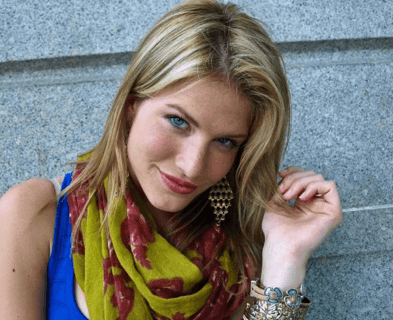 “I shot for Cosmo in June. I’m going to be on The View tomorrow, modeling Fourth of July clothes. Nothing, like, huge.”

Nothing, like, huge. It’s July, and I’m on the phone with 20-year-old Annmarie Nitti—model and New York University junior—asking her what work she has done in the past month. “Nothing huge? You shot for Cosmopolitan magazine!”

She shrugs off my boyish disbelief with a brisk, nonchalant laugh, the laugh of a blonde-haired, blue-eyed model who has done this before (“I work consistently with Cosmo.”), a laugh eerily reminiscent of the sounds popular girls used to make during my sophomoric, high school attempts to engage them in sustained conversation. Words like “lingerie” and “swimsuit” saunter off her tongue.

When my summer roommate asks me who I’m interviewing, I pick up the June Maxim, the World Cup issue, turn to the appropriate page, and point gingerly, fearful that my rather regular looks might contaminate the physical beauty captured in one photograph.

Yes, that’s who I’m interviewing. Yes, she’s a model. Yes, she’s our age. No, she does not want your number.

Not Your ‘Cookie-Cutter’ Model

Yet, superficially condensing Nitti into her size-2-wearing, camera-ready Cosmo persona unfairly situates her substance in her physicality, not her perso

nality. Doing so misses the nights she used to spend watching the History Channel with her grandfather, the evenings spent at bars challenging (and beating) every guy in sight to a game of ping pong. It glosses over the five hours of sleep she averages each night being both a full-time student and model, and the 3.7 GPA those few hours earned her last semester. In the fall, Nitti goes to Jets games on Sundays (she’s a Long Island native). She thinks other models subsisting on cotton balls and yogurt are stupid, and prefers steak and eggs, cheeseburgers, pizza or a good barbecue—even though, after all, she is a model.

“I get weird looks all the time,” Nitti says, knowingly. “Mostly because I’m not the cookie-cutter model. I don’t have any, really, traits of a model. Like, I eat a lot. I play a lot of sports.”

Throughout high school she played basketball, lacrosse and soccer, and she swam. In elementary school, she was the only girl on the boys’ soccer team. Modeling, however, which is relatively new for Nitti, has taken over. It’s been two years since she began working for Wilhelmina Models in New York City. Growing up, Nitti didn’t give modeling much thought, despite her mom’s few years as a runway model.

“She took me to all her runway shows, and…they dressed me up just like her,” says Nitti. And for a little while, she wanted to be her mom—wanted to be a runway model. “But that quickly phased out…I was such a tomboy growing up.” She laughs at this. It’s airy, light. The type of laugh that would make a guy forget his own name at the bar. Not the type of laugh you would expect to hear on the lacrosse field.

At 17, an agent from her town started calling her, asking her to model. Nitti’s mother convinced her to follow through. Soon after, Nitti signed with Hampton Models, which arranged her first magazine shoot. From there, a make-up artist recommended her to Wilhelmina. And that carried Nitti to NYU. She had wanted to apply to football-loving Penn State University—her dad, John, played for the Jets and the Giants, and her older brother plays football at Cornell—but with a burgeoning modeling career at a new agency, it made practical sense to be in the heart of the Big Apple.

Given Nitti’s resume, school could be an afterthought: she’s a showroom model for Victoria’s Secret; has done numerous spreads for Cosmo and Maxim magazines; a lingerie shoot with Sports Illustrated magazine’s Melissa Haro; the Seven Jeans runway show last year; modeling for Fresh Pair, an online designer lingerie retailer, and Rent the Runway, an online hub for women to rent designer dresses. The list goes on. And Nitti still took an 18-credit course-load a semester ago.

Nitti’s modesty seems simultaneously pessimistic and realistic. When I e-mail her in September about her Victoria’s Secret showroom status, she gives me the same line from the summer: it’s not that big a deal.

“The chances of becoming a supermodel are pretty slim,” Nitti readily admits. “I figured I might as well be in school while I try to make it in modeling.”

‘All Day, Every Day’

When you press Nitti for details—how the hell do you manage all this?—she shies up.

“Her down time is either to sleep or to do homework,” jokes Rajan. When I called her, she hadn’t seen Nitti in two weeks. In the past, Nitti has lost friends over her modeling.

“I always joke around that I’m my own best friend because I’m alone all day, every day,” says Nitti.

It’s true. In many ways, modeling owns Nitti’s life. She always dons “pretty hair” and “pretty make-up” because you can’t go to castings “looking like trash,” relatively speaking. Thirty auditions a week might yield just two or three jobs, and that’s after spending 50 bucks on taxis (each week). The other auditions? For Nitti, it’s either “your boobs are too big” or “your thighs are too muscular” (because, in the modeling industry, a size 2 is cuuurrvy). She stays up until 3 a.m. doing homework.

“I can’t go out on weeknights, I just can’t do it. It’s hard to make time for my friends and my family. Everything is a lot to juggle,” says Nitti. She’s exasperated.

It’s helpful that her 29-year-old Portuguese boyfriend Miguel Alves is also in the modeling industry and can relate. “We manage to find time to hang out,” he says. “Even if it’s just me walking her to class or picking her up from a job and taking her home. It’s tough, but we make it work.”

Even so, adversity remains. On set, Nitti dislikes the primping and prodding, hates having her makeup done. She has been rubbed down with tanning lotion. She told Cosmo no more bedroom scenes: “You actually have to be naked and kiss the guy, and you only make $150 for the shoot.” Besides, at Nitti’s age, she should really be with other female models in Paris, or Japan (“They kill for American girls.”), or somewhere else foreign, doing shoots and building up her book. But in New York (where it’s hard to even brush your teeth without feeling incrementally smaller), Nitti is a whole five-foot-eight, blonde-haired, blue-eyed bucket of, well, ordinary. All-American.

“The whole thing is a really big gamble,” admits Nitti. “Who’s gonna be the next Gisele Bündchen? Down the road in two years, if I’m a nobody in modeling and I wasted all my college years trying to succeed, then it sucks. A lot of stuff you miss out on, but it’s all part of it I guess.”

What Keeps Her Going

But Nitti is stubborn, resolute. Not ignorant of reality, but perseveringly tenacious. She forgoes the late nights out, the Wednesday-night drinking, that second cheeseburger, all because she is determined to get somewhere with modeling.

“You’re getting paid to work with somebody new every day, to stand there and take pictures.” Mid-interview panic over, Nitti is giddy again. “If I can make money doing a living where I can be traveling all over the place when I’m done with college and not stuck in an office cubicle, I think that’s what keeps me going.”

And taking pictures isn’t all Nitti gets paid for, now that she’s signed on with STADJ Model/DJs, a company that recruits models, trains them to spin and unleashes them on the NYC club scene. Nitti’s spun at Lavo NY and the Avenue, along with a handful of other clubs. (I ask her how she can pick up yet another thing to do. She tells me she has cut back on other things. Then that laugh again. I let this DJ business slide.)

“My friends kind of hate me ‘cause I’m never around to…live the normal life of a 20-year-old.” Nitti is talking fast now. She’s adamant, “The fact that I have been in national magazines when I’m very new to modeling is a great thing, but at the same time I wanna be in Vogue, I wanna be in Sports Illustrated. I just want to be pushed even more. I don’t see what I’ve done as accomplishments. I see it as a starting point for doing more.”

Walk the Runway With Annemarie

At NYU you’re studying: I started out with history, but with all the modeling and the events I had to go to, I figured that media, culture and communication would pertain much more to what I’m doing.

Weirdest modeling job so far: I had to do a shoot for a romance book cover novel, with my boyfriend, because the other male model was sick.

Tricks of the trade: I always wear white eyeliner on my eyes, because the white eyeliner makes you look more awake. I always have ChapStick with me. And I always carry those oil-blotting pads.

What keeps her awake: I’ll drink coffee in the morning. My favorite thing from Starbucks is the mocha latte because I love chocolate.

Her role ‘models’: I really like Doutzen Kroes. She has a very womanly body. She’s not stick skinny. Tori Praver: she was discovered in a surfing competition because she was just wearing a bikini, and she became a big-time Sports Illustrated model. And she took what she learned in the modeling industry and started her own surf clothing/swimsuit line. She brought back something special from modeling.