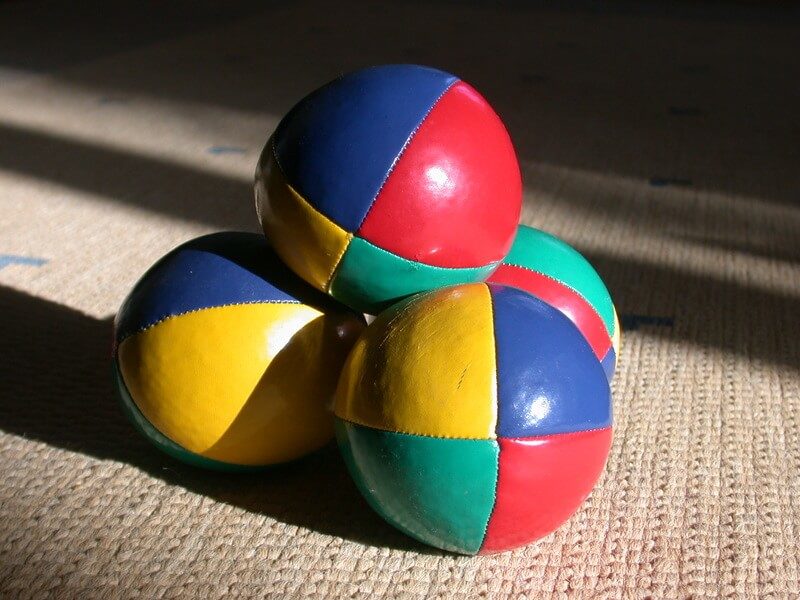 About the Juggling Balls in My Dorm Room

I remember the time I should have realized my problem.

I was in grade school, and my older brother’s juggling phase had inspired me to purchase my own kit from the long-awaited Book Fair. I brought my new treasure home, stole away to my bedroom and prepared myself for what I envisioned to be the first glimpse of a lifetime career in juggling excellence.

It was a short-lived dream. One attempt after the next barely amounted to one cycle before each of the balls inevitably fell to the floor through my confused hands. I felt defeated, exposed. Thanking God no one had witnessed such a deficiency, I threw the balls under my bed and went back to the things I already knew I was good at.

The time I actually realized my problem regrettably wasn’t until the end of my first year of college.

It was a Saturday evening; I was lounging on the shag rug of my dorm room, scrolling through some online store I had no intentions of purchasing anything from and eating a well-balanced meal of Peace Tea and microwaveable Chef Boyardee. I didn’t know who to get dinner with because my track teammates were at an away meet. Ten minutes on, 10 minutes off, I was icing my injured hamstring: the reason I wasn’t at the meet.

The problem was that over the past year, I’d allowed my identity to revolve around an established, safe routine, most of which had to do with track and class and little branching out beyond. So when I felt the foreboding “pop” in my left leg halfway through the 100-meter dash the week before, I felt a similar feeling in my sense of who I was. Without my fail-proof routine, what was left?

If Chef Boyardee was a real person, he would have peeled off of that plastic bowl just to slap me. But instead, the blow came from my awakened conscience: You can be doing so much more.

That night, I prayed and wrote more than I had in a long time, gradually coming to the conclusion that in order to live out this instinct to do “so much more,” I needed to stop being so comfortable.

I stopped walking around campus with headphones in when I was alone and made an effort to say Hi to everyone I knew. I started reaching out to people instead of waiting for them to make the first move. I accepted an offer to go to a leadership camp I knew almost nothing about, applied for a university trip to Ireland without making sure I had friends going first and registered for a painting class the following semester, even though I knew I struggle to accept criticism on my art.

To the shy track girl who had been hiding within her own routine, it felt like a self-inflicted scheme to put myself in as many situations as possible where I could fall flat on my face. It was pretty terrifying.

As I moved through Operation Demolish Ally’s Comfort Zone, there were certainly plenty of doubtful moments. Sometimes people didn’t reciprocate my friendliness, and I had to deal with the pangs of rejection. There were times at the leadership camp and on the Ireland trip that I can remember thinking why the heck did I come here? There were times I felt alone, times I felt vulnerable.

By not giving up in the face of these hardships, though, I was ultimately opened up to new friendships, experiences and immense personal growth that wouldn’t have been possible otherwise. By embracing each challenge, I gradually saw all of the forgotten parts of myself come out of hiding and learned how to let the world see them, too, despite things not always being “perfect.”

Track remains an important part of my life—my teammates are still some of my closest friends and I love the feeling of working hard and competing—but I have a much better outlook on it now. I no longer use it as my wall from the vulnerabilities that accompany a full, creative life. Instead, I see it as another aspect of my life that I can integrate into making the most out of every day and making as much positive difference as I can. I just wish I would have broken down the wall before my hamstring did it for me.

At the end of the summer, when I was finishing up packing for a promising sophomore year of college, I found the set of juggling balls underneath my bed. I laughed to myself, and then relocated them into one of my many boxes of college life sustenance, vowing to practice as a means of proving a point to the perfectionism-driven quitter of my past.

So, yes, I still fail quite often, and my roommate now knows that she lives with a subpar juggler, but I have made great (OK, slight) strides. Maybe if I persevere, I’ll find that the dream isn’t as doomed as I once thought.