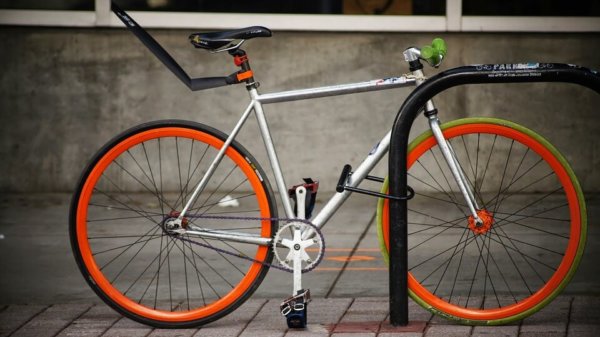 Buy the Bike: A Senior’s Rationale for Cruising Into the Finish Line

I, like many college seniors around the country, officially moved back to school for the final time last weekend. Being a senior is a weird thought, one that I’m still trying to process as I nearly eclipse what once was the unimaginably massive peak of college during my freshman year.

An article like this could continue with something that leads into the fact that the carefree fun is almost over, that sky is falling or that the security of institutional education, a guiding hand for our first 20-something years of correct decision-making, will soon disappear. I could write more about how I soon won’t set up an undergrad apartment again, visit the 4 a.m. burrito joint again or experience the thrill of trying to get into a bar underage one more time. I could do that. But I won’t. I’m going to tell you about a decision I made that has every bit to do with none of that at all.

I bought a bike for $125 on Craigslist yesterday. Why? Simply because I could. What better place to put a little summer money into than an old-ass bike whose style doesn’t exist anymore?

I live a block from campus, and I move out in less than a year. Where I go to school, the road ices over starting in December. No one rides a bike on campus. I have no need to buy a bike on campus. In fact, many could argue a bike might be one of the more questionable, head scratching purchases a college senior like me could make. There are 10 thousand grander things to do in the first scene of my final act of college theatre besides purchase a bike from a shady third party garage-sale website in a state where it snows for half the year.

But here, my friends, lies our fork in the road. This isn’t just any bike. This is a sweet, French-made two-wheeler with a funky old brand I don’t recognize and painted in a shade of teal that probably doesn’t exist on the color spectrum anymore. The white rubber tape is a shade darker from experience, and the pedals are as sharp as boot spurs. An old mustard color lines the tires and screams 1983. The chains make a funny clicking noise that gives it an odd sense of sturdiness. A true character in wheeled form. A new friend on a campus that I befriended at first sight.

But more importantly, my new bike serves as a concrete representation of the definitive moments of my college experience–the good and the bad, the perfections and the imperfections–and not the abyss of professionalism that we, honestly, know nothing about. I bought a bike because with the great unknown of the real world coming hot around the corner, I wanted to make sure I would cruise into it in style.

To start scrambling to figure out what I’m going to do with myself once I graduate feels weirdly necessary. Do I take the GRE? The LSAT? Should I consider grad school? What would I even go to grad school for? Where will I be five years from now? 10? I may be alone, but these kinds of things replace the sheep I count before I go to bed. “Certainty” surely doesn’t describe my plans after graduation.

I’m not saying forget these questions and throw them out of your brain; if you know what you gotta do, do it. But at the same time, forgetting about all that these past four years prepared you for isn’t a good thing. This bike will do pretty much nothing objectively to my year besides cut my commute from 10 minutes to three. However, the simple fact of buying a dirty old bike with my drinking money for the weekend and cycling around campus is an awesome reminder that I still identify as a college student. A college student with one hell of a year left to enjoy before dealing with things like salary, insurance or a career–whatever that is.

So go buy your bike. Buy your ‘80s French-wheeled toy with strange tires and rusty chains. Do something different and a bit questionable because, frankly, you’ve got a year (or two, or three, or four) left before things get serious. Isn’t college supposed to be a ride in the breeze?

University of Michigan Senior majoring in political science with a passion for Bay Area sports, ice white Chucks, and ’60’s soul revival. On a search for what makes the world tick – just as soon as he finds that answer for himself.

Previous Post:My Nickname Gave Me Friends
Next Post:Am I Sexist? Why I’ve Only Ever Written About Male Artists for Over 3 Years