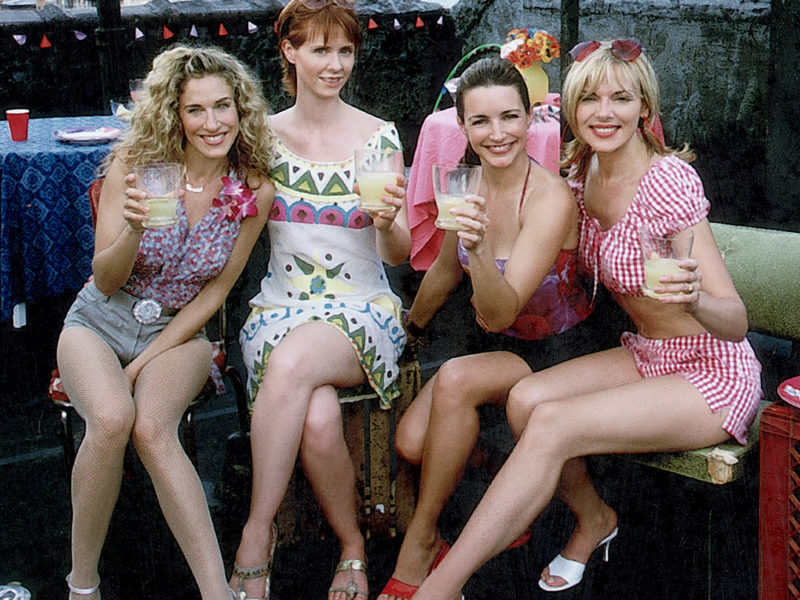 Sydney FosterDec 6, 2018
Home » Latest Posts » 10 Sex and the City Episodes to Remind You That Your BFFs Can Be Your Soul Mates Too
FacebookTweet

Sex and the City, an HBO staple and 1990s/2000s icon, follows the lives and romantic trial and errors of four women living in NYC. Although they are a bit further in their careers and have more dating experience, Carrie and the gang have a lot of wisdom on friendship and relationships to offer. The show was a trailblazer for women talking about topics such as sex and relationships openly. Although some aspects are dated, the overall theme of the strength of female friendships and the struggles of dating in a modern world remain relevant to the college experience.

But with so many iconic quotes, moments and guest stars, I couldn’t help but wonder:

What are the most iconic moments that help remind us that we are single and fabulous?

Carrie gets a blast from the past dating Wade, a comic store owner who still lives with his parents, and realizes he still has some growing up to do when he throws her under the bus for “bringing marijuana into the house.” Perhaps this reminds you of a freshman year memory when a roommate (or romantic fling) let you take the heat for contraband in a dorm room. This episode serves as a great reminder that sometimes we all need a childhood throwback. College, after all, is the strange period between living as a kid under your parent’s roof and as an adult out in the real world. However, a childlike spirit can certainly develop into a great personality trait—as long as you know when to turn off the switch.

Mr. Big drops the bombshell that he is going to Paris for as long as 6 months without asking for Carrie’s opinion. She reacts in disbelief that she is once again being pushed out of Big’s life and after one last night together, knows that she and Big are done ‘for good.’ This leads her to wonder if she ever actually loved him or if she was just addicted to something she knew she could never actually have; a feeling many college students can relate to. Watch this episode when you have a Mr. or Miss. Big of your own who you need to finally let go of.

Running into Mr. Big right after his wedding to Natasha, Carrie gets to finally let go of him. Although showing up outside of an ex’s wedding may not classify as a good idea, finally getting closure and understanding why it didn’t work out between you two can turn out for the best. Similarly, you may have an idea of your college experience that might not turn out as you expect it would when it comes to relationships or even a major path that just isn’t a match. Watch this episode when you find yourself going through a hard breakup and need reassurance that at times some relationships weren’t meant to last and that something better awaits for you.

Frightened by the idea that all men have a ‘freaky’ side, Carrie rampages her new fling’s apartment in a desperate attempt to reveal his before it’s too late (and gets caught in the act). This episode touches on the idea that we all have quirks and look for a person who loves us for all of these little things. Watch this episode when you need a reminder that sometimes the couch can become your best friend on a Saturday night rather than braving the dating world.

Perhaps the most memorable and comedic break up of the entire series, Carrie’s discovery of the “I’m sorry. I can’t. Don’t hate me” post-it note is an iconic Sex and the City moment. Never one to let a break up get her down, Carrie and the gang head for a night out where she flashes the post-it at the perpetrator’s friends and later, attempts to get out of the backseat of a cop car. Watch this episode when you need a good laugh and a reminder that even when you find yourself  unlucky in the love department, you can count on your friends to lift you up and maybe even bail you out.

On a girls trip to Atlantic City, Samantha frantically worries that Richard is once again cheating on her. Her suspicions become too much to bear and she runs to her hotel room in an attempt to catch him in the act. Despite him only being guilty of showing friendliness with hotel staff, Samantha bursts out “I love you too Richard, but I love me more.” In this moment Samantha decides her mental health is more important and she can no longer see someone she doesn’t trust. When it comes to dating, your well-being is not something to gamble on. Watch this episode when you need encouragement that some relationships aren’t worth the stress.

When Carrie ends up face down on a New York Fashion Week runway, she realizes she has two choices: she could slip off the runway and hide “or [she] could pick myself up, flaws and all, and finish.” And of course that’s exactly what she did, reminding us that even when we fall, we can pick our fabulous selves back up and have our friends cheer us on the whole time. In college you’ll definitely find times when you need to pick yourself back up. For instance, perhaps after a test that could have gone better, roommate mismatches or maybe an awkward Tinder date or two. Whatever pickle you find yourself in, watch this episode when you need to dust yourself off and remember that your friends will cheer you on as you get back up on your feet.

This question begs the age-old question: is it better to fake it than be alone? Carrie also had to face a major insecurity when she winds up on the cover of a magazine with the title: Single & Fabulous? She spends the rest of the episode coming to the realization that she can indeed be single & fabulous and does not need anyone’s approval to do so. In the modern college era of swiping right instead of relationships, you may feel you have received too many left swipes. Watch this episode when you need some confidence in yourself being single and fabulous, especially with your best friends (and soul mates) by your side.

Miranda gives one of her most relatable moments in this episode when she begins a deeply involved relationship with her TiVo (for those of you who only know and love Netflix, TiVo is a recording device for TVs.) When the technology fails her, she is as devastated as if she was undergoing heartbreak—something we have all felt during a Netflix malfunction. Watch this episode when you need to relate to a fellow couch potato on a Friday night spent eating Ben & Jerry’s.

This episode delivers one of the most iconic lines of the entire series that reminds us what the show is really all about. After a disaster of a birthday party, Carrie admits to the girls that she is distressed that she doesn’t have a man in her life to celebrate with. At this Charlotte responds “maybe we can be each other’s soul mates. And then we can let men be just these great, nice guys to have fun with.” In college you will find that you rely on your friends more than ever being away from home for the first time, stumbling through inescapable romantic miss-steps. Watch this episode when you need a reminder that your friends can be your soul mates too and that you are never truly alone with them by your side.

Previous Post:Top 10 Pet-Friendly Colleges 2018
Next Post:10 Most Inspirational Athletes at University of Florida with Big Dreams