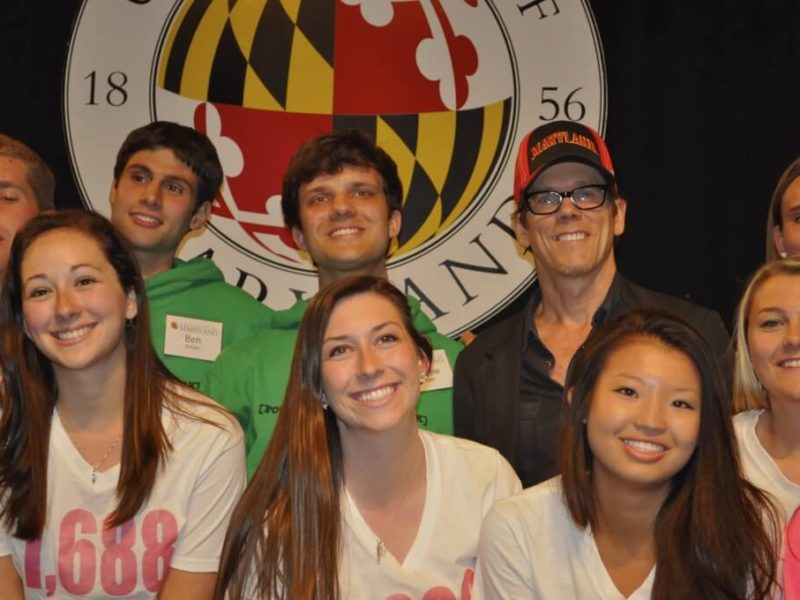 Your Waste Is Their Gain: UMD’s Food Recovery Network

Josh AxelrodMay 4, 2012
Home » Latest Posts » Your Waste Is Their Gain: UMD’s Food Recovery Network
FacebookTweet
As college students, we waste a lot of things. We waste our time on Facebook or Tumblr, our parents’ money by skipping class to do anything but study and, most of all, food. While only you control how you spend your time and education, some students are putting all that wasted food to good use.
The Food Recovery Network is a network of 11 different student organizations at the University of Maryland that collects food from various locations on campus and donates it to homeless shelters in Washington D.C. Since it was officially incorporated as a UMD student group in fall 2011, FRN has donated 32,000 meals.
“This is something that’s win win win win,” said FRN Co-Founder and Co-President and UMD senior Ben Simon. “It benefits the university by helping it to incorporate sustainability and service. It helps the shelters because they are able to divert their funds away from buying food to job training programs, literacy programs and the like. It helps students by teaching them leadership skills and nonprofit management skills.”

Simon said the FRN was originally affiliated only with The Love Movement, another UMD student group. At the same time as this FRN was collecting excess food from restaurants on Route 1 (slightly off UMD’s campus), the community service fraternity Alpha Phi Omega started its own food recovery program that focused on campus dining halls.
“I thought it was silly to have two programs doing pretty much the same thing, so we decided to merge,” explained Simon. “I kind of just knew [it was a] ‘if we build it they will come’ sort of thing.”
One of the students who was drawn to FRN was UMD junior Andrew Bresee, who is now the organization’s senior national field coordinator.
“I immediately saw how much food was originally going to waste and I just thought, ‘this is ridiculous,’” said Bresee. “It’s stupid that [FRN] didn’t start earlier.”
According to the research efforts of Simon and Bresee, UMD wastes an estimated 60,000 meals a year. It’s sobering statistics like that that have caught the interest of groups around campus. In addition to the 11 groups that are already part of FRN, there is now a waitlist of 13 groups wanting to join the cause.
“UMD is made up of a lot of people interested in service and doing good for the community,” said Bresee. “People get a kick out of doing the recoveries. FRN was established on the power of food bringing people together and we have demonstrated this.”
FRN is also expanding nationally. Not only is it on the verge of becoming a 501(c)(3) nonprofit, but the organization has also started chapters at Brown University, University of California, Berkeley, and Pomona College.
The group also recently gained national attention by winning the Do Good Challenge, a competition that encouraged students at UMD to, as the name suggests, do some good for their community. It was judged by actor and founder of sixdegrees.org Kevin Bacon, Today Show nutrition and health expert Joy Bauer and former UMD head basketball coach Gary Williams.
Simon was practically lost for words when describing how winning the challenge felt, calling it “unbelievable” and “magical.” Bresee was a little more coherent.

Find schools
“It was a dream,” he said. “I was surprised to win. I’m very happy that we did but there was a lot of really good competition. People were doing a lot of good, like building schools and raising a lot of awareness.”
In addition to winning competitions and feeding the hungry, FRN has also taught UMD’s dining services, which accounts for 98 percent of the donated food, a thing or two about sustainability.
“Dining services is able to become more conscious of the amount of food they have been wasting,” said Bresee. “They’ve dramatically decreased the amount of food they’re donating, which we view as a very positive thing.”

FRN is also making an impact at UMD sporting events. They’ve collected food from lacrosse, football and basketball games. Simon said they became so recognizable in the tunnels where the basketball team runs onto and off the court, star UMD guard Pe’shon Howard once gave FRN a shout out before a game.
Every job has its perks. Bresee said that if students at others schools want to reap the same benefits while helping their community, they can go to UMD’s chapter for advice and mini grants to get started.
“This is a great project to start up,” pitched Simon. “I’ve personally never been a part of a service project so rewarding and so immediately impactful. It’s social, it’s fun, it’s hands on, and you get to see the difference you’re making right away.”
Photo: at http://cnsmaryland.org/2012/04/20/fundraising-finalists-earn-degrees-of-praise-from-kevin-bacon/
FacebookTweet
Life