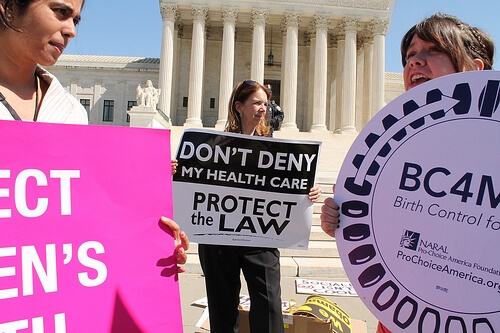 Obamacare and My Vagina: The Benefits

Yesterday marked a major win for President Obama's health care reform law, the Affordable Care Act, often referred to simply as "Obamacare." While there is some bad news that comes along with the Supreme Court ruling, there is a silver lining for young adults fresh out of college, job opportunities and their parents' health insurance.

By finding the individual insurance mandate constitutional and validating it as a tax, Chief Justice John Roberts ensures that the 20-somethings of America will have access to healthcare regardless of their financial situation or pre-existing conditions. Prior to the ruling young adults didn't have to purchase health insurance plans and often chose to opt out because many couldn't afford the added expense on their already tight budget of Ramen noodles, cheap beer and rent for a grimy apartment.

With the job market failing to employ a number of young adults, healthcare seemed like the least of their worries. Because of this, 28 percent of young adults between 26 and 34 were uninsured in 2010 according to the Kaiser Family Foundation. By upholding President Obama's healthcare reform plan, this number will drop significantly by 2014 when it will require young adults to purchase a healthcare plan or risk federal penalty. Also an option now, young adults can remain as a dependent on their parents' insurance plans until the age of 26, leaving their parents to pick up the tab on any residual reckless behavior they feel obligated to cash in on.

If by 2014, you cannot afford a health insurance plan, you can qualify for a hardship waiver to help you gain access to healthcare. This is great for me because while 2014 seems far away and my mom has always told me to be positive, it looks like the only companies hiring and giving away health benefits are the ones who don't need a writer with tattoos and pre-existing health concerns (it's only asthma, geez!).

Even better for me and my vagina (uh oh, is this word still too offensive?) the new reforms don't allow gender rating, which previously caused women to be charged more for the same coverage as men. Guys, you already get to pee in the snow and don't have to ingest hormones to avoid pregnancy that make you gain weight, crave pickles or bloat for a week on a regular basis, so it's only fair that women get access to mammograms, domestic violence screenings and birth control without a co-pay. Also, pregnancy is no longer considered a pre-existing condition, which I find hilarious, because pregnancy is only a condition for nine months, but being a woman, now that lasts forever.

Campus health care plans will also improve. Preventative services are now covered, which for college students means things like depression screenings (something to consider before telling your parents you failed last semester), HIV screenings and STI prevention counseling, contraception coverage and alcohol misuse screenings are all easily available. Access to these preventative services helps to ensure that young adults stay healthy and can catch health problems before they get worse and more expensive.

Also, "the Affordable Care Act may represent the strongest foundation we have ever created to begin closing LGBT health disparities," according to Secretary of Health and Human Services Kathleen Sebelius. What this means is that the LGBT community, a group that is often looked over or ignored by many parts of our current system, will gain access to the care they need.

Hip hip hooray, Obamacare! You have ushered us into a new age. One in which women and members of the LGBT community are better understood and cared for, and hey, it only took until 2012. Now if I could just get PetsMart to change its healthcare plan, maybe I could get my dog's ear infections covered…

Previous Post:Get Outside Already!
Next Post:Fifty Shades Of Pervy?