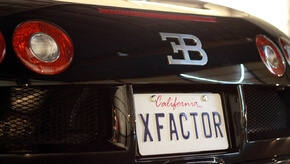 You’ve probably been hearing incessantly about Simon Cowell’s latest venture, The X Factor. After all, that’s the reason he bailed on American Idol. And while, yes, The X Factor is a singing competition and features Cowell and Paula Abdul back on the judging panel, this British import has its own style and flavor.  And some TV viewers are ready to try something new.

The X Factor proves it’s different from the get-go: all auditions were held in front of a live audience. While the judges make the final call on who to send through to the next stage, the audience’s reaction to the performer obviously plays a significant part in the final choice. Then there’s the $5 million contract with Sony Music up for grabs and the fact that people of all ages can audition, including vocal groups.

Forget about Idol’s Top 36, Top 24, and Top 12. In The X Factor, contestants go through a “bootcamp” in which they’re placed into four categories: guys, girls, older singers, and vocal groups.

"I think it will bring something new to the singing competition field,” says University of Maryland junior Jen Clifford. “It will give the chance for viewers to see something else other than 18-year-old kids."

After auditions, contestants go through a bootcamp round. If they fail to impress the judges a second time, they face elimination. After bootcamp, competitors go the judge’s house for some mentoring where only the best will make it to the final live show during which America will finally have the chance to vote.

The X Factor has found itself the center of a lot of buzz and a scandal before even airing. First there was the big question about who would join Simon on the judging panel. Names like Mariah Carey and Nicki Minaj were thrown around before it was finally revealed that Cowell, Abdul, influential music producer L.A. Reid and U.K. pop star Cheryl Cole would be on the judge’s panel. A few weeks later, Cole was fired and former Pussycat Doll Nicole Scherzinger was in.

“I was looking forward to the X Factor until the Cheryl Cole debacle,” said Clifford. “I am a big fan of her on X Factor UK and was excited for her big break in the States. The situation around her leave from the show was a mess.”

Now that you know all this about the X Factor, are you looking forward to another singing competition? Or is Simon Cowell’s mean-guy persona so 2002?