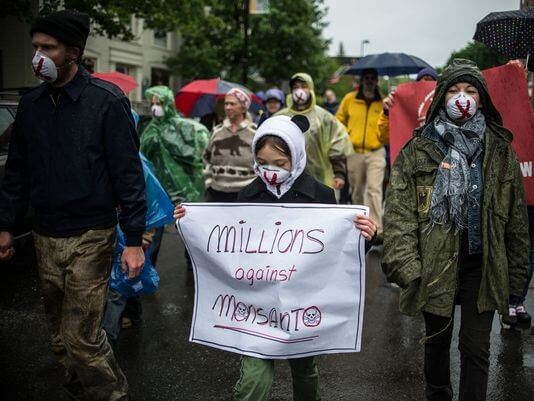 This past Saturday brought a number of protests against genetically modified food across the country and world. The “March Against Monsanto,” one of the largest agricultural biotechnology companies in the world, took place in 52 countries and 436 cities, according to USA Today.

Monsanto was one of the first corporations to create genetically modified food products in the 1980s, and its agricultural practices have been controversial for decades. This particular rally against Monsanto began in February by founder Tami Canal. “We will continue until Monsanto complies with consumer demand. They are poisoning our children, poisoning our planet. If we don’t act, who’s going to?” Canal said.

Last week, the Senate rejected a bill that would allow states to require labeling foods that are genetically modified. Monsanto argues that labeling would confuse consumers and lead them to believe that genetically modified foods are not safe to eat. As of now, the Food and Drug Administration has not said that there is any difference between GMO and non-GMO foods.

“I think that the theory behind it is good but the process of labeling creates a lot of murky situations, because so many things in the food-producing chain are genetically modified, from the seeds to the fertilizer,” said Ana Berglind, a senior at MIT studying biology. “We live in a society that likes pretty-looking and uniform things…so people need to know what they’re getting into when they say they don’t want anything genetically modified.”

Lindsay Thomson, a junior at Temple University majoring in English and visual studies said she actually saw some protesters over the weekend. “I do agree with their cause, and I think it’s important to know what is in the crops we grow and the food we consume. But still, I didn’t really like what I saw over the weekend,” Thomson said. “People were protesting by a music festival I was attending, but parents had their young children protesting along with them….that just bothers me a lot,” she said, referring to a small protest in Boston.

The organizers of the movement say they plan to continue with their anti-GMO cause, uniting supporters until they see results. “It was empowering and inspiring to see so many people, from different walks of life, put aside their differences and come together today,” Canal said.