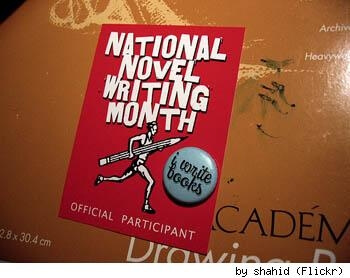 Every November, thousands upon thousands of ambitious writers try to do the impossible: write 50,000 words in one month.

Known as National Novel Writing Month, affectionately called NaNoWriMo by its participants, the annual event is meant to raise awareness about the importance of writing.

As one of the purest forms of expression, NaNoWriMo gives hopeful authors the opportunity to clear their schedules and make writing a priority.

Ultimately, NaNoWriMo serves as a reminder that every great novel in history began with a single word, and anyone who is willing to make that first step to just write can do the same.

In honor of the end of 2011’s National Novel Writing Month, here is a playlist of songs based on some of the most famous novels to date.

In Douglas Adams’ The Hitchhiker’s Guide to the Galaxy, the number 42 is revealed to be the “answer to life, the universe and everything.” Chris Martin, the lead singer, confirmed to Q Magazine that the themes of “Life and Death” behind the novel inspired the title song.

2. Don’t Stand So Close To Me, The Police

The song, about a teacher who lusts after his student, is very reminiscent of Vladimir Nabakov’s Lolita, where an older man pursues an underage girl. The lyrics “Just like the old man in that book by Nabakov” further proves this comparison.

In an interview with Billboard magazine, Katy Perry said that the passage from an unconventional source inspired the mainstream hit. “My boyfriend showed me a paragraph out of Jack Kerouac's book On The Road, about people that are buzzing and fizzing and full of life. They shoot across the sky like a firework and make people go, 'Ahhh.' I guess that making people go 'Ahhh' is kind of like my motto.”

While it has yet to be considered a literary classic, few can deny the mass-market appeal of Stephanie Meyer’s Twilight Saga. According to an interview with MTV News, Timbaland’s “Morning After Dark” was also inspired by the popular vampire franchise.

The lyrics “Gollum and the evil one” and “the darkest depths of Mordor” are just some of the many Lord of the Rings references that can be found in this Zeppelin classic.

6. Sympathy For The Devil, The Rolling Stones

In the novel The Master and Margarita, the devil is described as a refined socialite or a “man of wealth and taste.” Lead singer Mick Jagger was given the novel by his then-girlfriend Marianne Faithful, which led to the creation of what would eventually become “Sympathy For The Devil.”

East of Eden, by John Steinbeck, parallels the story of Cain and Abel from the book Genesis. In the novel, the word “Timshel,” which in Hebrew means “thou mayest,” is found to have a special, symbolic connection with the famed Bible story.  Mumford & Sons’ song of the same title draws direct inspiration from Steinbeck’s beloved work.

8. Giving Up The Gun, Vampire Weekend

Lead singer Ezra Koenig revealed to NME magazine that a Japanese novel his father once gave him, titled Giving Up The Gun, inspired the song of the same name. The novel details the time when Japan expelled all foreigners, ceased all trade, and adopted the sword instead of the gun. “It seems unimaginable now that humanity could willingly go back to an older technology. It got me thinking about whether you could give up all the things that you have and go back to a simpler way of life,” Koenig said.