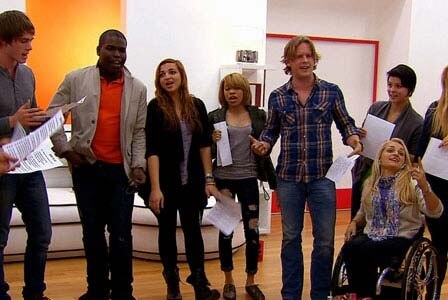 Why You Should Be Watching the Glee Project

Kelsey ThomasJun 19, 2012
Home » Latest Posts » Why You Should Be Watching the Glee Project
FacebookTweet

Are you a Glee fanatic?  If so, you’re lucky to get a double-dose of this series.  Although Glee’s fourth season isn’t set to return until this fall, Oxygen’s series The Glee Project should be enough to hold you over until then.

Glee producers and Oxygen have banded together to give you your second helping of Glee (because as we know, fans of the show may be a little obsessive—oh, come on, tell me you don’t know a proud “Gleek”).  Basically the show takes Glee auditions, pulls the curtains back, throws in some cameras and contests and voila— a reality series!  It’s comparable to hits like MTV’s America’s Best Dance Crew and Fox’s American Idol, but with some unique elements added in. And the prize isn’t a record deal or a flashy cash prize, but a chance to appear in multiple Glee episodes the following season!

Viewers get the chance to fall in love with characters based on a series of happenings each week.  Each episode contains the following elements centered upon a weekly theme:

Homework assignment: The show opens up each week with contestants performing segments of a song for mystery guest judges from the Glee cast. Samuel Larsen, winner of last season’s Glee Project, popped in on the latest episode, casually giving a couple of the contestants heart attacks.

Music video:  Next, the cast mashes their talents together in a truly Glee-style music video performance.  This segment of the show is the most high-energy as contestants struggle not to melt from bright stage lights, cameras and fierce orders from singing and dance coaches. Last week’s music video was an explosion of high school house party complete with dance circles, red Solo cups (uh oh!) and spin-the-bottle.

Callbacks: Critiqued on their performance in the previous two categories, the bottom three contestants are chosen (womp, womp, womp).  The good: each contestant is assigned a song for a chance to redeem his or herself for the poor performance.  The bad: they must perform this song in front of Glee’s creator himself, Ryan Murphy.  The ugly: each contestant is only given two hours to pound the lyrics into their head and hopefully work out those bottom-three jitters.


Final three recital: Each of the bottom three contestants perform their song (well, that’s the goal, though in some cases cramming in those lyrics last minute just wasn’t happening).

Final callbacks: Posted in the form of a high-school who-made-the-team list, hopeful contestants find out which contestant is getting the cut.  And as if being booted isn’t bad enough, the axed contestant must complete a farewell performance: Avril Lavigne’s Keep Holding On. Anyone else find it kind of cruel how cut contestants are always forced to crank out another song in between tears?

A new episode airs tonight at 10pm EST on Oxygen so tune in!
Have you met the cast?

Previous Post:Turn That Fling Into A Thing
Next Post:A College Student and Successful musician, Tamar Kaprelian is a Renaissance woman