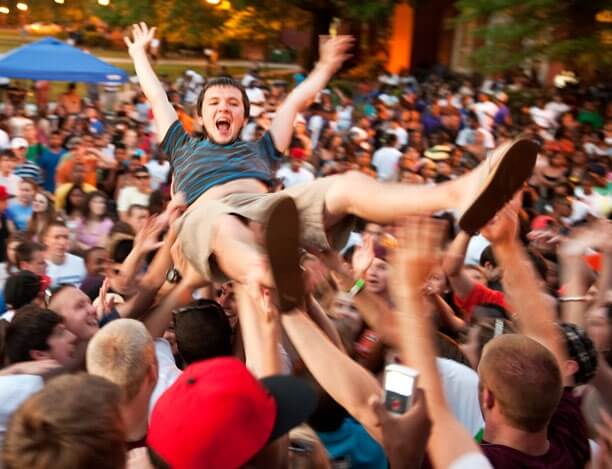 Why Do We Crowd Surf?

Think about the last time you found out your favorite band was playing in your hometown. Exciting feeling, right? Concerts give you a chance to stop thinking about life for a while and hang out with hundreds (or thousands) of your closest friends. With each band and each show, everything is always a different experience, and you never really know what to expect.

Waiting in line, making friends, fighting your way to the front, singing as loud as you can to your favorite artist, stage diving and crowd surfing are some of the things that make the concert going experience memorable.

Crowd surfing is a love it or hate it kind of thing. Some people love the adrenaline rush, while others could do without people kicking them while they’re trying to enjoy the show. Regardless of your thoughts on crowd surfing, it’s an important part of the concert experience, and to be honest, shows would not be the same without it.

“If you’re going to crowd surf, ask before you use someone else to get on top. Ask someone to lift you, don’t try to shove yourself up there off of some poor unsuspecting person,” Katie Tuite, recent graduate from the University of Massachusetts Amherst, said.

‎"The thrill of crowd-surfing lies in the adrenaline of being pushed above a rush of energy generated by the band, and being moved by the will of the group that is continually powered by the musical reverberations of the songs,” Mat Fukano, sophomore at University of California at Santa Cruz, said.

Many show goers unfortunately don’t care about others when it comes to crowd surfing. In April 2011, I saw The Wonder Years in Covington, KY. I was enjoying my time and singing my heart out to one of my favorite bands when someone twice my size crowd surfed over me and landed right on top of me. I wouldn’t have cared so much if he wasn’t twice my size, but I did suffer a slight neck injury because of the fall. But, that didn’t stop me from getting back into the crowd and having a great time. I wasn’t going to let a slight injury ruin my night. If you’re going to crowd surf, first take a look at the crowd and make sure you aren’t putting someone else in harms way.

“Any show frequenter ought to know enough to expect it and be on the alert for it. If you're really that concerned, take a spot a little off to the side (yet still plenty close to the stage) where you're much less likely to get kicked,” Eric Joseph, senior at University of Pittsburgh, said.

Crowd surfing can be an adrenaline rush and a lot of people love the idea of having the rest of the crowd control their fate for those few moments when they are in the air. However, that doesn’t mean you still don’t need to be careful! Be aware of your surroundings and try not to hurt anyone. Everyone is at the concert to have a good time, and no one wants their night ruined because of a literal kick in head.

“I crowd surf because I like to party.It was like a magic carpet ride if the carpet was made of human hands,” Dylan Rees, senior at Marshall University, said

“It is simply the nostalgia of being lifted up in the air to some music that has lifted you and the people around you up so many times before,” Blair Chopin, junior at University of North Carolina at Chapel Hill, said.