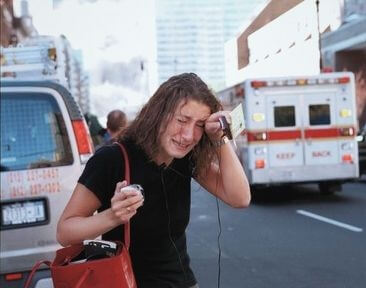 There are very few major historical events in my life that I can clearly recall like a home movie at will.  I know I was at a Pirates game when Michael Jackson died and I watched Obama’s inauguration on a projector in my high school’s auditorium.  9/11 is an entirely different animal; it was an event that I now understand to have profoundly shaped the current course of history, but I was too young to grasp that at the time.  Most college-aged kids have similar memories of confusion and possibly panic on that infamous day.  Here’s a small sample of what today’s college students were doing on 9/11, told in a vivid detail that makes it seem like the twin towers only went down yesterday.

“I was ten years old and my teachers did their best to keep the situation as quiet as possible during school but were nervously hurrying in and out of the classrooms; something was going on.  At the same time, it was also my dad's birthday, and I remember watching the news footage on television after school with my family while eating birthday cake in shock and disbelief.” – Dana Andreoli, Junior, Indiana University

"I was in elementary school in Rhode Island and we had phones in all the classrooms. The phone rang and the teacher picked it up and told me I was being dismissed early. I didn't know why I was being dismissed. I went to the office and my mom was waiting for me with my two brothers and my sister. Once we left, she told us that a plane had hit the towers in New York City and that she took us out of school to make sure that we were all safe. She took us to Applebee's and we were watching TV and they kept replaying the footage over and over again. I kept asking myself why someone would want to do this to our country. When you're young you don't really think that anything is a big deal but I knew that this was and that it was going to change everything." – Chelsea Tirrell, Junior, Hofstra University

“I was at home in California getting ready for school when I found out about the twin towers.  I didn't really understand what had happened.” – Sasha Freedman, Senior, University of Michigan

“When I found out about 9/11, I was sitting in my sixth grade classroom.  My teacher had run out of the classroom, and when he re-entered, the only thing he could say was, ‘A plane hit the towers.’ I didn't comprehend that something was truly wrong until he faced the classroom with an almost shockingly pallid complexion and a sincere look of unease in his eyes.” – Samantha Scharmett, Senior, University of Michigan

“I remember my social studies teacher in sixth grade being really sad and not teaching us anything because something was going on. She wouldn’t tell us what was going on though and then all of a sudden the school went into lockdown mode. When I got home I finally figured out what had happened. My mom sat me down and told me what happened as we watched the news." – Andrew Nardella, Senior, Shepherd University

“It happened when I was in sixth grade. I remember being in gym class and seeing the teachers faces change, but I had no idea why. I could easily see that people were in panic mode, but there was no reason given to the students why. Then I remember student after student being called down to the office because their parents were there to pick them up. I was one of those students. My mom briefly explained to me what had happened, but the magnitude of the event really didn't register until a couple years later." – Chas Guy, Senior, University of Maryland

"I lived in Arizona, so it was still very early in the morning when the attacks happened. I remember waking up and seeing both my parents still home, glued to the TV. I knew something was off because they were supposed to be at work. I sat down and saw that one of the Towers had been hit. We thought it must have been an accident until we watched live as the second plane hit the World Trade Center. That's when I knew something was very, very wrong. I stayed home from school that day replaying those clips in my head." – Alexi Knock, Junior, Hofstra University

Previous Post:Join the Club
Next Post:Pretty Babies and Sugar Daddies