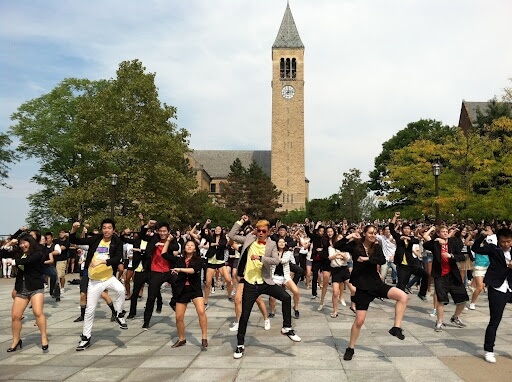 What’s the Deal with Gangnam Style?

South Korean pop-star Park Jae-sang, commonly known as PSY, 34, has become an international icon since his video “Gangnam Style” was released on July 15. The video shows PSY and back-up dancers doing dance moves that have become famous for their quirky style. The video has created an international dance movement often described as “doing the pony dance while wearing a suit.”

Although the song has become an overnight sensation, many still don’t know exactly what “Gangnam style” even is. PSY’s single is a parody of the elitist culture of Gangnam, an up-scale neighborhood in Seoul where he grew up, according to the New York Times. The activities PSY is seen doing demonstrate the lavish lifestyle of a Gangnam resident. PSY emphasizes this further by wearing a suit and sunglasses in the video while doing dance moves unrepresentative of the high class of the neighborhood, according to the New York Times.

Gangnam style has already gained over 319 million views on YouTube, and inspired multiple parody videos that have gone viral, such as a foray into the realm of American politics titled "Mitt Romney Style." The latest trend inspired by PSY’s video is Gangnam style “flash mobs.” Cities all over the nation and world have been sites of recent flash mobs. New York City’s Washington Square park-goers experienced one of the mobs on Sept. 26, according to The Huffington Post. The mob was put together by fan Tae Young Woo and I LOVE DANCE, a Korean hip-hop group who offered dance instruction workshops in Gangnam style dance to help participants prepare for the event.

The craze is now spreading to college campuses such as George Washington University and The U.S. Naval Academy, according to In the Capital.  Cornell University posted a video of its flash mob that took place on Sept. 14 on its website, which now has over 57,000 views. According to the dailytarheel.com, the Korean American Student Association of the University of North Carolina hosted a flash mob as well on Sept. 26. Student Advisor posted links to “Gangnam Style: 6 Best College Parodies” on its website, including schools such as Harvard, University of Oregon, University of Texas and St. Olaf College.

Coordinated by university libraries on campus, the University of Maryland attempted its own version of the flash mob on Sept. 27. The mob was met with mixed reviews, with many saying it was uncoordinated and the music was impossible to hear. However, a UMD parody video from the event created by the University Library system was uploaded onto YouTube recently and already has over 22,500 views.

The video’s popularity has grown so much that the North Korean government used the video to mock one of South Korea’s presidential candidates, according to the NYT. Even in a country where most people don’t even have Internet access, PSY’s video has made its mark.

South Koreans are reportedly happy about the attention PSY’s single is bringing to their culture. Although K-pop has a devoted following in Asia, rarely does it become a staple of international pop culture. Regardless of why the video is popular, no one can deny the fact that PSK has managed to set a K-pop milestone by become internationally famous overnight.